FDC Camps In Kisoro Ahead Of Bukimbiri By-elections; Worried About Heavy Deployment…

FDC asks opposition to support their candidate in Kasese – 93.3 KFM 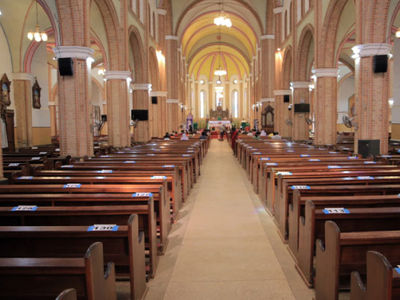 Many churches remained closed to congregational worshippers yesterday on the first Sunday since the President allowed the reopening of places of worship last week.This was attributed mainly to the ill-preparedness of the churches in the enforcement of the Standard Operating Procedures (SOPs) put in place by the Ministry of Health, which they should follow if they are to resume public prayers.St Paul’s Cathedral Namirembe in Kampala, the seat of the Anglican Church, remained closed to worshippers yesterday.Officials at the Church of Uganda provincial secretariat, revealed that although some churches had opened, others under the Anglican Communion, will officially reopen on October 4 since they had not yet complied with the SOPs.The unpreparedness to have the SOPs readily in place, saw yesterday’s church services continue to be held at the official residence of Archbishop Dr Stephen Samuel Kaziimba within the precincts of the cathedral. Advertisement

In his sermon, Dr Kaziimba reiterated his plea to government to reconsider increasing the maximum number of worshippers to more than 70, which the President prescribed for churches and mosques.While relaxing more restrictions on the Covid-19 lockdown last Sunday, President Museveni allowed places of worship to reopen but with a maximum number of 70 worshippers.President Museveni also said individual prayers or confessions with priests or counselling are encouraged, but with SOPs. He maintained the ban on overnight prayers.For Watoto Church, which has more than 10 worship centres in Kampala City, Mbarara and Gulu and Juba in South Sudan, Pastor Julius Rwotlonyo, the Associate Team leader, said all their celebration points would remain closed to corporate worship until further notice.Pastor Rwotlonyo explained that with government restrictions limiting the number of worshipers to only 70, it would be meaningless to resume corporate prayers at such a time.However, he was quick to say that small groups known as ‘home cells’ are now allowed to resume. He advised worshipers to always congregate in open places as they observe SOPs.“We will continue to gather as a church family online and on-air as we pray for more favourable conditions. The pastoral is discussing ways that we can still gather in our various communities and we will communicate as soon as this is finalised,” he added.It wasn’t any different in Lira as Catholic churches under Lira Diocese remained closed to corporate prayers yesterday. Bishop Linos Santus Wanok said they needed at least one month to prepare for re-opening.“We are not ready to re-open our churches. We need one month to prepare because we don’t want to risk the lives of our people. But we shall continue with community prayers,” Bishop Wanok said.The bishop further explained that districts in Lango sub-region are currently facing stage three of Covid-19 pandemic, which is characterised with community infections, hence can’t allow churches to re-open for fear of mass infections.He said priests will be deployed to conduct prayers in the community and that there will not be singing of hymns as it has been in the past.At Immaculate Conception Cathedral Soroti, Christians who showed up for the first Mass were stranded when they found all the three entrances closed. A female worshiper we asked, said the church leadership had not prepared for reopening.Other churches openedHowever, not all was gloom as some churches reopened for Sunday celebrations.At Rubaga Cathedral in Kampala, before Mass started, the faithful were required to register their particulars at the entrance. No faithful was allowed to enter the church without a facemask and sanitising.Only 70 faithful were allowed to attend the Mass and were asked to observe social distancing. Most of the seats inside the cathedral remained empty and the Mass was attended largely by the youths.Mr Augustine Mutumba, a resident of Wakaliga, Kampala, said he attended yesterday’s Mass to praise God for protecting him throughout the tough times of the Covid-19 pandemic.“God has protected me and my family throughout the lockdown and has provided for me despite the tough economic times. This shows how merciful He is. I am here to worship and praise Him,” he said.In his sermon, Archbishop Cyprian Kizito Lwanga implored believers to remain faithful.“We should always be truthful because when God created us in his own image, he gave us conscience so that we could differentiate between good and bad. When we do good, we save our souls,” Bishop Lwanga said.At Christian Life Church in Bwaise, Kampala, Pastor Jackson Senyonga, allowed Christians to congregate but in three separate places with each sitting having a maximum of 70 worshipers with SOPs.At Victory Christian Centre Church in Ndeeba, Kampala, pastor Joseph Serwadda, presided over a service of 70 worshipers.Several worshippers were barred from entering when the number hit 70 and were told to wait for the subsequent services. “We had 70 people in the first service and more are coming  [in the next service],” Pr Serwadda told this reporter.In Kigezi Sub-region, the first day of the reopening of churches, saw mammoth worshipers left stranded at different church entrances as the clergy leaders enforced the maximum number of 70 at a time.Relatedly, Bishop of South Ankole Diocese Nathan Ahimbisibwe asked Christians to comply with the rules against Covid-19.At St Andrew’s Church, Bukoto in Kampala, the first service after the reopening was used to baptise worshippers.   Compiled by Anthony Wesaka, Ephraim Kasozi, Ismail Kezaala, Patrick Ebong, Stephen Otage, Tony Abet, Amos Ngwomoya, Perez Rumanzi, Irene Abalo, Robert Muhereza & Leonard Mbishinzimana