Chaos at Bomas as Chebukati is Whisked Away

Exclusive: How Prof. George Wajackoyah Ended Up in Exile 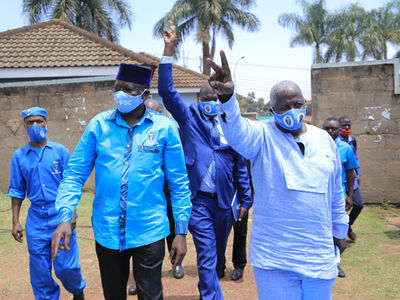 The Opposition Forum for Democratic Change (FDC) party is set to elect its presidential candidate for the 2021 Genera Election next week.The FDC has two contestants; party president Patrick Amuriat and national chairman Wasswa Biriggwa.Addressing journalists at the party headquarters in Najjanankumbi, Kampala, yesterday,  Mr Ibrahim Ssemujju Nganda, the FDC spokesperson, said their national council will convene on October 6 to, among other things, elect the presidential candidate.He said the council, which comprises MPs, district chairpersons and members of the National Executive Committee (NEC), will represent the National Delegates Conference to choose between Mr Amuriat and Mr Biriggwa for the party flag.“The district chairpersons will first convene delegates from their respective districts to obtain a mandate to elect a presidential candidate on their behalf at the party headquarters. By close of business next Tuesday, the country will know the candidate going to carry our presidential flag,” Mr Ssemujju said.He said the two aspirants are currently in western region where they have held joint campaigns since last week.“The candidates met delegates from Ankole in Mbarara and Bushenyi [districts] on Saturday. They also campaigned in Rukungiri, Kanungu [districts] and met the rest of Kigezi delegates in Kabale District last evening,” Mr Ssemujju said.Mr Ssemujju also castigated the process in the ongoing nominations for the local government councils candidates by the Electoral Commission (EC), accusing it of failing to manage the exercise. “These nominations have been poorly conducted, especially in urban centres where the number of councillors are obviously high. Candidates have had to sleep at nomination centres in Wakiso, Mukono and other areas. In some extreme cases, candidates have had to bribe security personnel at the gates to access returning officers,” he said.“Midway the exercise in Wakiso, the format of nominations changed from first come first serve to allocating days to a constituency. Some candidates are up to now without a certificate of nomination. The EC chairperson, Justice [Simon] Byabakama, must investigate these irregularities or else they will be repeated during the general elections,” he added. Nominations of Local Government councils candidates are slated to end on October 1.However, the acting EC spokesperson, Mr Paul Bukenya, dismissed the allegation, saying the nomination exercise is moving on smoothly.He said those who have not yet received their nomination certificates might not have fulfilled the requirements. “The exercise is still ongoing so it is speculative and inciting to say some people might be left out. Local Government attracts big numbers, that is why we gave it more days of nominations and everything will end smoothly,” Mr Bukenya said.Mr Ssemujju asked the EC to release a clear campaign strategy for all categories of electoral positions.“Now that candidates have and are being nominated, the EC must issue clear and specific guidelines on how campaigns are going to be conducted. We need to know the number of meetings and number of attendees allowed. The number of people attending MPs and presidential campaigns should be higher,”  he said.