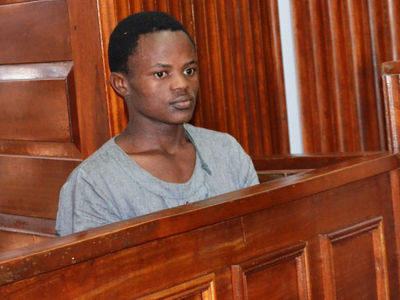 “You don’t have to take plea before this court because it has no jurisdiction to hear the above counts. It is only the High Court that has powers and that is where you will be able to ask for bail if you so wish,” Ms Wakooli ruled.Ms Wakooli remanded Nuwashaba until October 12 when he will return to court for mention of his case.Days before the suspect appeared in court, police detectives took him to Ssenyonga’s home to help with investigations at the scene and trail of crime.Here, Nuwashaba told the detectives that it is where he got Kyamagero and took her to Kumbu Forest Reserve about 500 metres away. A few minutes later, Nuwashaba led the team to the spot   where he reportedly cut off Kyamagero’s head before dumping the torso in the forest. He also confirmed to detectives that he stole Shs80, 000 from Mr Ssenyonga’s home, part of which he used as transport from Masaka to Kampala.However, Nuwashaba did not explain to detectives the means of transport he used to Kampala and the motive of the killing. As Nuwashaba was appearing in court, Kyamagero was buried at her father’s village home in Lwengo District.editorial@ug.nationmedia.com