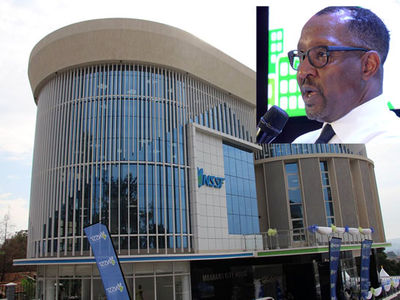 The National Social Security Fund (NSSF) performed sufficiently well in its investment portfolios over the past financial year despite the outbreak of the Covid-19 pandemic, the Fund’s managing director, Mr Richard Byarugaba, has said.Mr Byarugaba said this puts the Fund in good stead to declare an interest on members’ savings, which would be above the annual inflation rate.“It has been a very tough environment but we have usually promised that savers’ money will be compensated for above inflation. That has always been the target and hopefully when the minister [of Finance Matia Kasaija] makes an announcement on Monday, it will take care of that,” Mr Byarugaba told Sunday Monitor. The members’ meeting at which the performance of the Fund and annual interest will be unveiled is slated for tomorrow.Mr Byarugaba did not say which rate of interest will be declared. NSSF gave savers 11 per cent interest on their savings last year and different observers project that the figure will be lower for this year because of the effects of Covid-19. Offering an interest above inflation may mean that the savers could get just about four per cent interest since inflation averages just over three per cent. But, sources close to the NSSF Board say the recommendation to the Finance minister is to declare an interest of 10 per cent for the year starting July 2019 to June 2020. If the minister maintains that, the interest offered by NSSF on savers’ money would have reduced by just a percentage point, from 11 per cent for the financial year that ran from July 2018 and ended June 2019.   Tough environmentOn Thursday morning, during a press conference called to brief the public on the Fund’s performance last financial year, 2019/2020, Mr Byarugaba said the Shilling had stood its ground against both the dollar and the Kenya shillings. Kenya is the biggest foreign market in which NSSF invests savers’ money. NSSF figures from the returns on investments in bonds in the Kenyan economy showed some improvement, with yields of 11.449 per cent, 12.5 per cent and 12.8 per cent on the five-year, 10-year and 15-year bonds, respectively as at June this year compared to 10.9 per cent, 12.7 per cent and 12.8 per cent, respectively on the same bonds as at June 30 last year. Advertisement