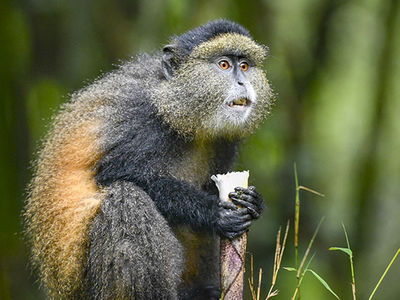 Mgahinga Gorilla National Park is host to the endangered golden monkeys, a new tourist attraction.Mgahinga Gorilla National Park, which is part of the Virunga Massif is where “gold meets silver,” a tourism marketing catch phrase meaning a place where the golden monkeys coexist with the mountain gorilla sliverbacks. Mgahinga is also home to the endangered mountain gorillas.”Golden monkeys are special in that they have an outstanding color that is nearly to the gold color, they are unique in that you can only track them from the Virunga Massif,” Joyleen Tugume, a ranger-guide at Uganda Wildlife Authority (UWA) told Xinhua in a recent visit to the park. UWA is a state owned conservation agency.High up the ridges of the volcanic Mount Muhabura, which is part of Mgahinga Gorilla National Park, the golden monkeys feed on largely bamboo shoots. They live in troops of about 100, led by an Alpha male, according to UWA. Uganda has one habituated troop of about 60 golden monkeys and another group of about 80 monkeys are also being habituated as the country builds new tourist attractions. Golden monkeys are endangered species. According to UWA, tourists who come to see the mountain gorillas, which are the country’s main tourist attraction, can also track the golden monkeys.Before tracking the monkeys, at the park gate, standard operating procedures like hand sanitizing, face mask wearing and social distancing are practiced in a bid to prevent the possible spread of COVID-19 to the monkeys. About 300 meters before reaching the golden monkeys, visitors are hand sanitized again and urged to keep their face masks on. Visitors are also not allowed to get less than 10 meters away from the animals.Tourism is one of Uganda’s major foreign exchange earners, bringing in about 1.6 billion U.S. dollars annually, according to ministry of finance figures.Although the sector has been worst hit by the COVID-19 pandemic, government is optimistic that it will pick up as the country continues to ease the lockdown restrictions.Abiaz Rwamwiri, director at Africa Wild Explorations, a tour agency told Xinhua in a recent interview that once the country’s international airport opens up on Oct. 1, as planned by government, tourists may start flocking in. Rwamwiri said that there are some confirmed tours scheduled for next year. Advertisement