Budaka registers 370 new cases of HIV, as officials say residents have abandoned use of condoms

Fik Fameica And Lydia Jazimine In ‘Bitter Split Over Disrespect’ 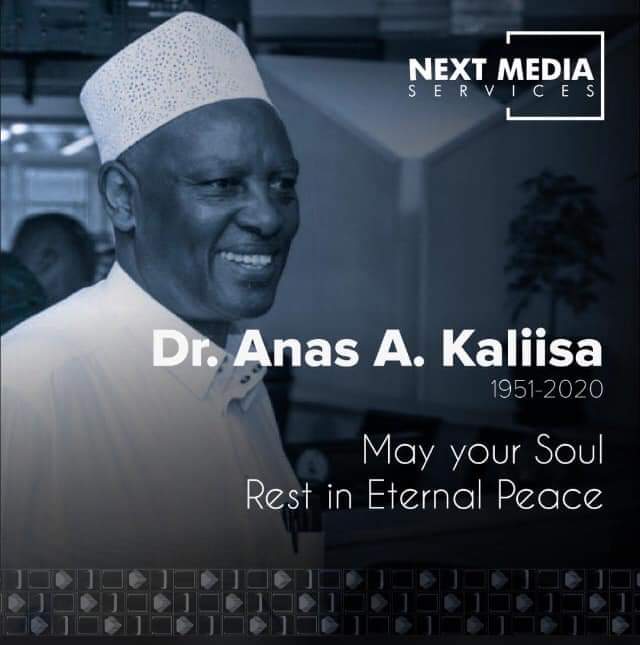 Dr. Anas A. Kallisa died on Wednesday evening (PHOTO/NEXT MEDIA SERVICES).KAMPALA — National Unity Platform (NUP) has postponed manifesto launch to Saturday November 7, to enable party leaders, including flag bearer and presidential candidate Bobi Wine participate in the funeral of Dr. Abdu Noor Anas Kaliisa.
According to burial arrangements, Dr. Kalisa, who died on Wednesday evening will be buried Friday in Ntungamo, Western Uganda.
“The manifesto launch is scheduled to take place in Mbarara, Kakoba Division. We have accordingly notified the Electoral Commission and Uganda police,” Bobi Wine, real name Robert Kyagulanyi Ssetamu has announced on Thursday.
Bobi Wine is also expected too officially open NUP offices in Mbarara City.
He also rejected the security detail that was given to him by the Electoral Commission upon nomination.
Addressing journalists on Wednesday, 04 November 2020, Bobi Wine, in reference to the Tuesday violence that followed his nomination, said despite the continuous provocation by the incumbent government, he and his supporters will remain peaceful as they move towards attaining political power through the will of the people.
Kyagulanyi was held by security in a police van outside his residence for several hours after his nomination for the 2021 general elections.
The security officers detained the Kyadondo East Member of parliament following his botched attempt to lead a procession of his supporters to the NUP offices in Kamwokya where he was expected to unveil his manifesto detailing NUP’s agenda.
According to Kyagulanyi, NUP and people power movement supporters are law-abiding citizens and will act within the law.
Kyagulanyi wondered why the Electoral Commission failed to guide security agencies on how to handle duly nominated presidential candidates, which saw his arrest a short distance from the nomination cente
He said the conduct of the security forces shows that the road to the polling day won’t be easy.
Asuman Basalirwa, the JEEMA party president and one of Kyagulanyi’s legal counsel says the ruling government is trying to narrow the political space by suppressing key opponents from implementing their campaign plans.
He argued that the manifesto which they had wanted to launch is critical for the upcoming election and is the social contract between their candidate and the electorate whose mandate they are seeking.
Electoral Commission has distanced itself from the fracas following Kyagulanyi’s nomination. Paul Bukenya, the acting EC spokesperson says they are not familiar with what transpired since they were still conducting nominations.
In a press statement issued on Tuesday, police accused Kyagulanyi of scheming to hold illegal processions from Kyambogo to the NUP headquarters.
“…we countered due to its negative impact on the flow of traffic, public safety, and public order. He was forcefully removed from his vehicle and a fracas ensued in the process of transferring him to the police vehicle. He was eventually safely delivered to his home in Magere,” the police statement reads in part.
The statement notes that whereas all voters have their democratic right to support a candidate of their choice, they should avoid violent confrontations that could spiral out of control between supporters of rival political factions as well as with law enforcement agencies.
Kyagulanyi has however rejected the police claims saying they should have come up with better ways to handle him if they thought the movement to his office would cause public disorder.
Comments

Mike Letti is one of seven Ugandans that will be on duty in the upcoming AFCON qualifiers. (PHOTO/Courtesy)A total of seven (7) Ugandans have been handed roles by the Confederation of African Football (CAF) ahead...

KAMPALA – The Speaker of Parliament, Rebecca Kadaga has tipped a South African based company; International Service Group (ISG) which is seeking investment opportunities in Uganda to interest itself in the mining sector. Kadaga...

Arsenal have won both of their opening two games in the Europa League this season. (PHOTO/Courtesy)Arsenal vs MoldeEmirates Stadium, LondonThursday, 05-11-2020 @11pmRef: Halil Meler (TUR) Arsenal is obviously the strongest team in Group B, leading...