Has Museveni changed his mind on his promise to pardon embattled former Police Chief Kayihura?  – UGNEWS24

‘Speculations about top Uganda Airlines bosses being suspended are not true,’ says Gov’t 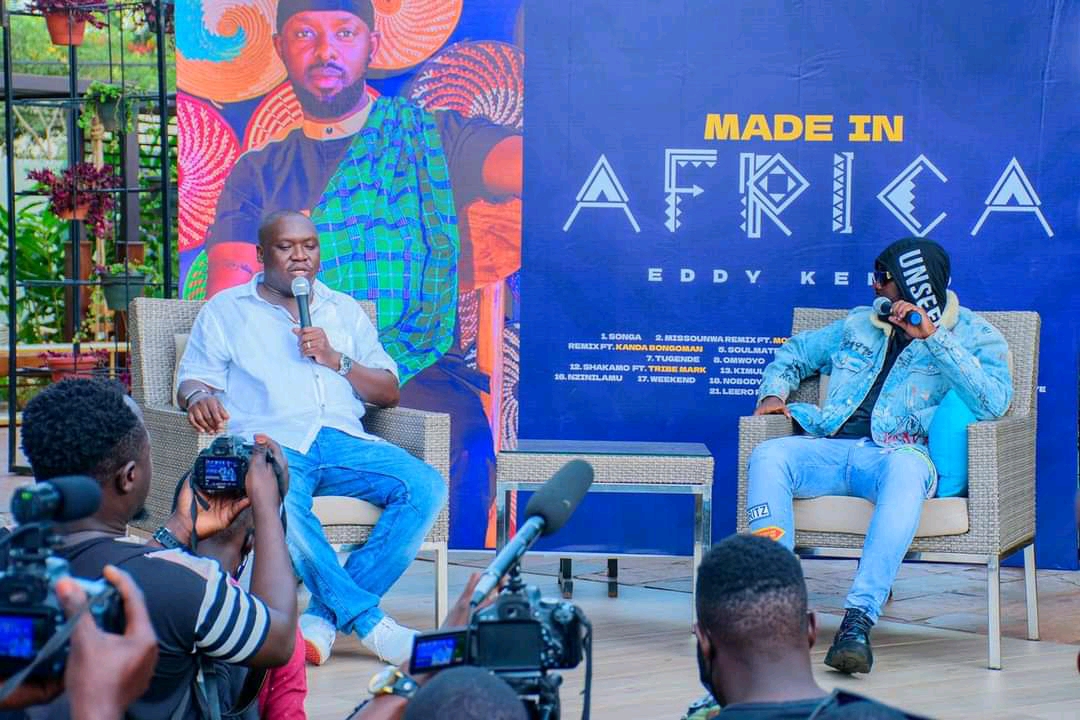 Comedian Salvado and Eddy Kenzo at the launch of Made in Africa album (PHOTO/Courtesy).
KAMPALA – Multi-award winning musician Edrisah Musuuza better known by his stage name Eddy Kenzo has unveiled his much anticipated album ‘Made In Africa’ for his fans to stream and enjoy.
The 21- track album comes after close to two years of silence from the singer. Despite having mega hit songs like Tweyagale and Ssemyekozo, Kenzo has not released much music due to the effects of the Covid-19 pandemic that saw him stuck in Ivory Coast for some time and the political situation in Uganda.
In what seemed as a sneak peek into the album, Kenzo unveiled track 17 titled ‘Weekend’ off his new album days ago that got people talking about what the album would actually look like in its entirety.
Made In Africa’s unveiling comes at a time when the entertainment industry is facing a lockdown that was instituted by the government in an attempt to control the spread of the coronavirus pandemic.
Prior to the unveiling, Kenzo shared that the album was inspired by three African legendary musicians; Kanda Bongoman, Philly Bongole Lutaaya, Mama Monique Seka.
Together with ‘Made In Africa’, Kenzo now has five albums Sitya Loss 2014, Zero to Hero (2016) Biology (2017) and Roots (2018).
Kenzo has over time released songs that have elevated Uganda’s music industry to the global stage. After his BET Award nod, Kenzo kept bagging more awards and soaring to win more fans in Africa and beyond.
Talking about his album, the Uganda Tourism Ambassador shared that while he was growing up, he was inspired by a lot of songs and legends that he wished to be like some day.
He explained that these legends inspired him a lot to be the musician he is today and always looked up to them.
“Some of these songs made our childhood so fun that we could dance till we all got covered up in dirt/dust. We decided to bring back the memories of three of these legends and keep their legacies moving,” he shared.
He added, “I want to start by thanking Mama Monique Séka for allowing me to re-do the all-time classic Missounwa. It was a very special moment with her in the studio, too much talent from her, the guidance and advice she gave me were so important to take me far thank you MAMA.”
Kenzo explained that Missounwa holds many memories in the African Music Industry. He affirmed that Congolese music has always been unique and has been identified in Africa and all over the world.

“I had a chance to meet the legendary Kanda Bongo Man and he was so welcoming and kept advising me over the years, Kanda Bongoman speaks to me as his own child and guides me on how to maneuver in the industry. I thank you Mzee Kanda Bongoman for the consent to remake MONI and for being such a great father figure in my career since I met you.”
Kenzo who also did a rendition of the late Philly Bongoley Lutaaya’s Born in Africa shared that the latter is a Ugandan legend who waved the flag so high in his time and still speaks to many even in his absence.
The Tweyagale singer stressed that Lutaaya championed the fight against HIV/AIDS when he came out as the first Ugandan to go public with his positive HIV status.
He described the fallen vocalist as the best of his time and his legacy has lived with people up to date.
“We sat with my team and thought of redoing one is best classics Born In Africa with the aim of extending his art and legacy to a wider range of audience, the story and life of Philly Bongoley Lutaaya is one that must be known far and wide. We thank the Lutaaya family, Madam @Tezra Lutaaya and Mr Lenon Lutaaya for welcoming the idea and giving us the support we needed, your father is proud of you guys wherever he is watching us from.”
Comments

Uganda’s Health Minister Jane Ruth Aceng speaking to the press (PHOTO/Courtesy). KAMPALA — Uganda on Friday banned all flights originating from India until further notice due to the surging number of COVID-19 cases in the...

DRC President Felix Tshisekedi (PHOTO/Courtesy). KINSHASA — President of the Democratic Republic of the Congo (DRC) Felix Tshisekedi declared late Friday a state of siege in the northeastern provinces of North Kivu and Ituri, due...

Allan Ssekamatte is a columnist with PML Daily (PHOTO/File). A Premier League Hall of Fame should ideally also embrace managers. On that account, Sir Alex Ferguson, who won 13 titles ought to have joined Shearer...