Brig Gen Mulindwa who died of Covid19, laid to rest

We’re in this together: candidates unite against police brutality

Museveni is no peacemaker, he destabilised Obote- Kabuleta

Real struggle: Amuriat against all odds

Burkina Faso to vote in shadow of jihadist threat 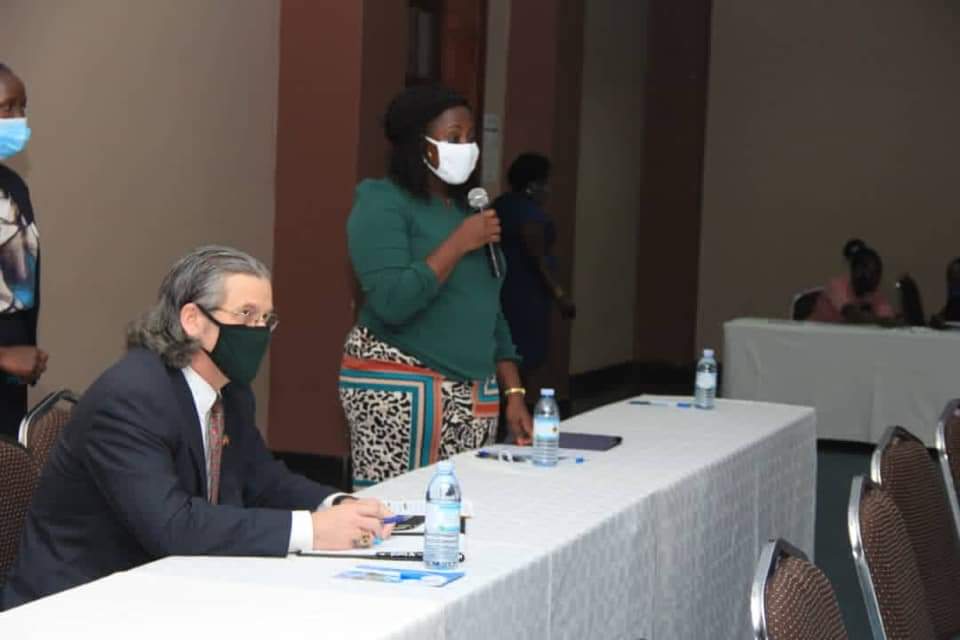 Judicial Officials in a group photo after a Court Users meeting at Silver Springs Hotel (PHOTO/Courtesy).KAMPALA – The leadership of the Family Division of the High Court this week held a Court Users meeting at Silver Springs Hotel, in Kampala to address some of the challenges affecting the administration of justice at the Court.
The meeting discussed several issues including; inter-country adoption proceedings, challenges affecting Administration Causes, agreeing on the best practices for the administration of family justice and improving inter-agency coordination.
In his communication to the stakeholders, the Head of Division, Justice David Matovu, appreciated the assistance and commitment rendered by Court Users in the administration of justice which has improved the returns for this year in spite the outbreak of the COVID-19 pandemic and its attendant effects.
“I would like to thank the Ministry of Gender and Social Development, the American Embassy, the Administrator General and National Identification Registration Authority for the great work you render to ensure the Family Court operates efficiently and effectively,” he said.
Ms Rose Aaca, the Principal Probations Officer at the Ministry of Gender, Labour and Social Development outlined the issues affecting the inter-country proceedings such as false information given by parents and children during legal guardianship proceedings, inefficient probation officers, child trafficking, failure of police to follow up on children referred there and inaccurate data about the number of adoption orders issued.
On his part, Mr Fred Ngabirano, a Commissioner at the Ministry of Gender appreciated Government support in ensuring that investigations for complex adoption cases are carried out.
He proposed that the Ministry be involved in the recruitment process of Probation Officers to ensure that the recruits are taken through the right procedures and orientation.He further added that special nine-member panels had so far been set up in 24 districts to guide parents and guardians on how to deal with guardianships.
Justice Ketrah Kitariisibwa Katunguka stressed the need for every child to have an Advocate. “I am surprised that some Probation Officers come appearing for the petitioner instead of considering the welfare of the child first. This is unrealistic,” she said.
She further clarified that the use of initials of parties in matters concerning children is a deliberate effort to protect their identities.
Mr Charles Kasibayo, the Administrator General, enumerated a number of challenges that his Office is grappling with. These range from; complicated laws especially those regarding separated widows and widowers, difficulty in determining parties to take over deceased’s property due to mixed marriages and lodging caveats.
He proposed that for effective service delivery; all Certificates of No Objection be computerised so that information can be shared among the stakeholders.
The Uganda Law Society, which was represented by Mr Twinobusingye Severino, appreciated the commitment of the Judges at the Division to ensure justice delivery.
Punctuality and commitment of the Division Judges to ensure that Justice is served but further outlined the challenges lawyers face which among others included hostile court clerks and delayed fixing of cases.
Justice Matovu reassured him that these issues will be handled by the Court’s Bar-Bench forum.
Justice Dr Joseph Murangira who made closing remarks shared that in efforts to improve service delivery, the Court’s management assigned Judges; Katunguka and Susan Okalany the responsibility of handling Adoption Orders.He agreed with the proposal of Ministry of Gender to oversee the appointment of probation officers.
It was proposed that the Ministry of Gender creates a Legal department to handle queries while the Division explores how to address the backlog of Administration Causes.
The meeting recommended that a case census be carried to establish jurisdiction of each case so that those that belong to other divisions be referred back to the right courts.
Notably present were Deputy Registrar, Festo Nsenga, US Embassy Consul Gene Arnold and his Assistant Naila Kigozi, Dr Katja Kerchbaumer from Austrian Development Cooperation, Mr Bashinyora John Bosco, the Makindye Division Town Clerk, among others.
Comments