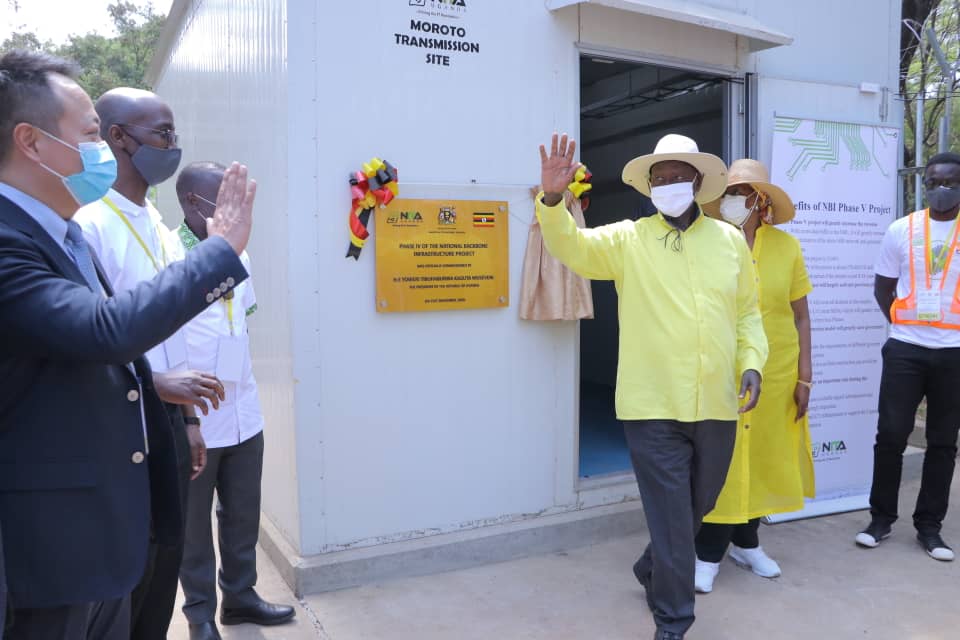 President Museveni commissions phase four of the NBI (PHOTO/Courtesy).MOROTO — President Yoweri Museveni has commissioned Phase four of the National Data Transmission Backbone Infrastructure and eGovernment Infrastructure (NBI/EGI) in Moroto.
The NBI is an internet carrying optical fiber cable that now runs across all the regions of the country.
Phase four project was launched on the 11th of May 2019 by President Museveni.
The project was successfully completed in March of this year and connected the Districts of Moroto, Napak, Katakwi, Moyo, Yumbe, Adjumani, Koboko, Maracha, Arua, Nebbi and Packwach onto the National Backbone.
Additionally, regional connectivity was achieved with the Democratic Republic of Congo with connections at Goli, Vurra and Mpondwe while with South Sudan Oraba was added to the existing connection at Elegu. With this, Uganda is now a fully-fledged communications hub with the seven major border posts of Uganda with its neighboring countries all connected to the NBI further strengthening regional ties.
Phase 4 of the NBI/EGI Project, implemented under the Regional Communications Infrastructure Program under the World Bank, has built onto the earlier implemented phases of the project to deliver a high capacity data network across the country specifically to the West Nile and Karamoja Region.
Key milestones achieved in the Project include building of the Optical Fibre Cable (OFC) Link from Kasese to Mpondwe, Karuma to Arua and Soroti to Moroto. Additionally, over 100 Ministries, Departments and Agencies (MDAs) were added to the National Backbone Infrastructure bring the current total of co to 603 MDAs.
NITA–U is currently implementing the Last Mile Project to extend connectivity to 700 MDAs across the country.
Comments

The Alliance for National Transformation(ANT) party headed by Maj Gen Mugisha Muntu has said there is no excuse for government’s...

A new ultra-deep oil and gas area with reserves of 1 billion tonnes has been discovered in Tarim oilfield in...