Bobi is large in presidential matters, Bebe is big in HiPipo awards

Museveni in Tanzania for Magufuli’s swearing in ceremony

‘Uganda Is at War,’ Says Lukwago at Dr Kaliisa Funeral

BURKINA FASO: Ras Simposh recognized for the height of his musical work. 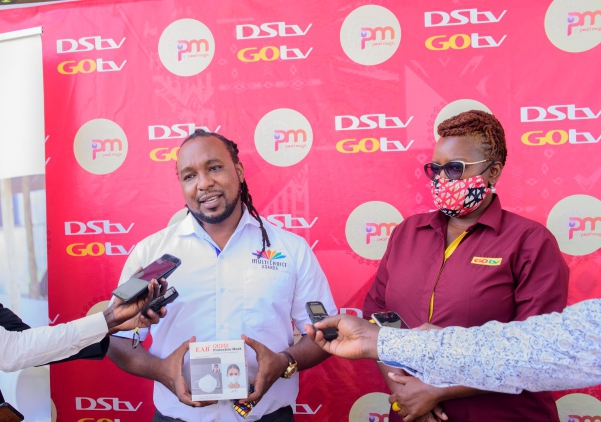 Colin Asiimwe (L), Head of Marketing at MultiChoice Uganda and Patricia Kiconco (R) Head of Customer Experience and Care at MultiChoice Uganda during a press engagement (PHOTO/Courtesy).KAMPALA — While marking its 2-year journey, MultiChoice Uganda’s Pearl Magic has continued to shape the growth of Uganda’s film industry by setting stage for showcasing local content and talent.
With over 145 Ugandan movie titles featured on the channel – two of these having been produced by our MultiChoice Talent Factory Students, 42 licensed TV shows, with some of these shows recurring up to the count of 25 seasons, and a growing number of Pearl Magic Original Productions. The local storyteller has created a platform to nurture talent on and off screen for casts and the supporting components in the film making processes.
Launched on 1 October 2018, the channel has a content mix of 100% Ugandan Movies, Dramas, Comedies, Music and Lifestyle shows which nourish the culture of family time in many households around Uganda.
The shows broadcasted on Pearl Magic DStv and GOtv channels including but not limited to; The Lukkas, Mistakes Girls Do, Sesiria, Tendo Sisters, Girl from Mparo, Mizigo Express, The Honorables, plus a musical show dubbed Jechili, resonate with the everyday life of Ugandans, and have guided the narrative of Uganda’s film industry.There is also a big push to ensure that we have a multitude of Original Productions with Our Perfect Wedding being the first of its kind. Other Original Productions include Story Yange, Date My Family Uganda, Sanyu, Mama@Me and Prestige.
Colin Asiimwe, Head of Marketing at MultiChoice Uganda observes that “Pearl Magic is positioned as a story teller with a blend of locally produced music and movie content premiered to ensure that there’s something for everyone, and Pearl Magic has set pace for this realization.”
“The movie industry has demonstrated positive growth from story-telling to the picture quality, sound and video effects, lighting by growing talents from actors, movie directors, film producers, sound engineers, art directors, costume designers among others and this has in the end attracted the viewers’ attention, Asiimwe notes.
He further explains that, “We have witnessed economies world-over grow, resultant of the film industry growth including Nigeria (Nollywood), Asia (Bollywood), South Africa not forgetting the big players like Hollywood, which I believe Uganda possesses the potential to grow to the same level,” Asiimwe explains.
According to Uganda Film Makers and Associates, globally, the movie industry generates over USD50 billion annually, and in Uganda, the film industry is estimated to generate about USD 50 million per year.
Asiimwe further commented that “As part of our investment into the industry, we launched the MultiChoice Talent Factory, which is among the projects MultiChoice Group has continued to cultivate through mentorship and talent development among individuals who wish to grow their careers in the film and movie industry.”
“For sustained growth in the industry, stakeholders in the movie sector need to forge meaningful collaborations that will steer the film industry to register the desired growth, and this calls for combined effort, and I believe we have continued to support in laying the right foundation through the different projects rolled out in Uganda and at regional level meant to enhance this initiative,” Asiimwe concluded.
Comments

By Stuart G-KhastVivian Tendo must be excited for Saturday night when she will make her maiden appearance and perhaps her biggest yet in her still short music career. Club Beatz concert this Saturday has added...

SHANGHAI — The China International Import Expo (CIIE), hailed as “an innovation in the history of global trade,” opened its third edition in this Chinese trade hub on Wednesday. As the world’s first import-themed...

Speaker Rebecca Kadaga in a meeting with members of the gym and wellness association after at Parliament (PHOTO/Courtesy).KAMPALA – The Gyms, Fitness and Wellness Association of Uganda has sought the intervention of Parliament in the...