Museveni turns down relief package for the vulnerable in Buganda – #ugnews24

Muhangi’s baby mama Prim not impressed with his singing

Police driver arrested for turning official van into a taxi

I Can Never Leave My Boyfriend — Chosen Becky 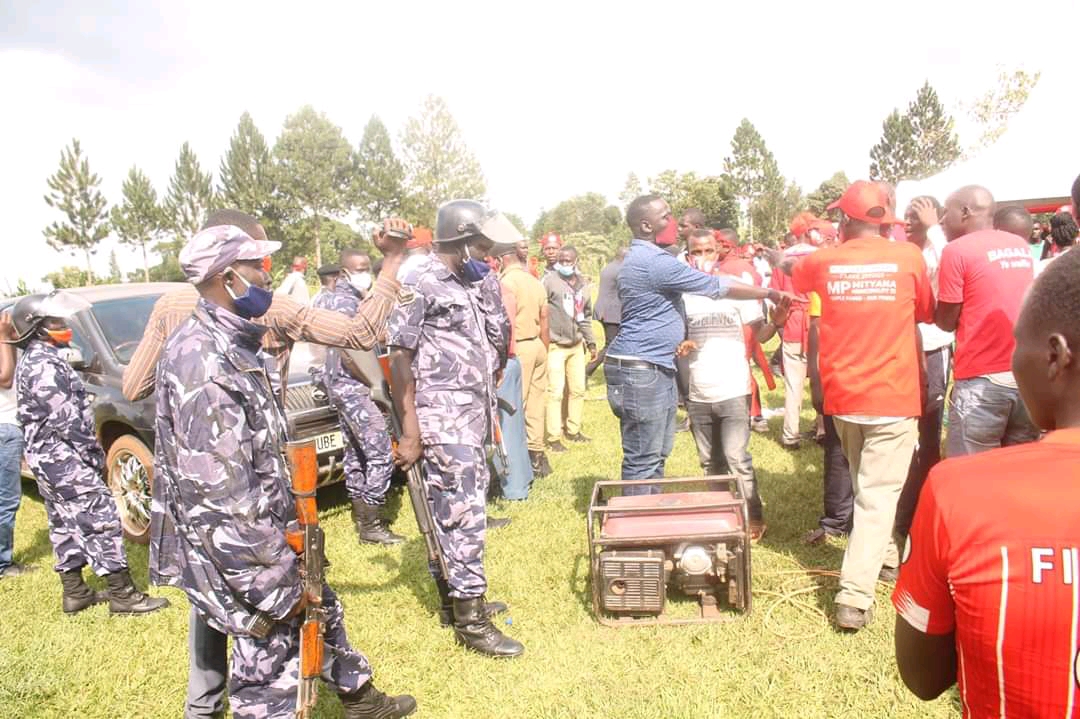 Police dispersing MP Zaake’s crowd as he launched his campaign in Mityana on Tuesday (PHOTO/Courtesy).MITYANA – Police in Mityana have blocked plans by Mityana Municipality MP Francis Zaake to launch his parliamentary campaign. Zaake had planned to launch his campaigns and manifesto at Naama village in Busimbi Sub County on Tuesday, November 17, 2020.
Police led by the Mityana District Police Commander Martin Okoyo restricted the launch to only 200 supporters and directed that they should practice social distancing to minimize the spread of COVID-19. However, more supporters continued gathering at the venue, overpowering the police.
Okoyo first ordered one of his policemen to turn off Zaake’s public address system, but Zaake instead used a megaphone to continue mobilizing his supporters. He also ordered Zaake to speak for only 30 minutes.
Angry Zaake supporters led by Faustin Lukongwe the contestant for Mityana Municipality Mayoral seat demanded the police to stop witch-hunting members of the opposition.
It was at this moment that the police fired tear gas for about 10 minutes to disperse Zaake’s supporters who were instead continuing to gather in big numbers. Ibrahim Ssekulima one of the residents who had turned up for the rally however condemned President Yoweri Museveni’s government for using the police to frustrate people’s efforts to peacefully change leaders.
Wamala regional police spokesperson Rachael Kawala says that they had allowed Zaake to hold the rally with not more than 200 people as required by the law but the number exceeded yet there were no efforts by the organizers to adhere to the covid-19 Standard Operating Procedures.
Comments

KABALE– The Police in Kigezi Region are mourning the death of a senior police officer D/Asp Turyasingura David who died...

Muhangi’s baby mama Prim not impressed with his singing

Portugal 🇵🇹  2 German 🇩🇪 4 Munich, Germany | THE INDEPENDENT |  Germany recovered from a goal down to lay down a real...

Read Time:2 Minute, 39 Second A national outcry by COVID-19 patients is still raging as hospitals run out of oxygen,...

Museveni turns down relief package for the vulnerable in Buganda – #ugnews24