The future of Uganda is very bright – Museveni – UGNEWS24

Tip Swizzy survived death as his car was vandalised

US speaks out on political persecutions in Uganda – Ekyooto Uganda 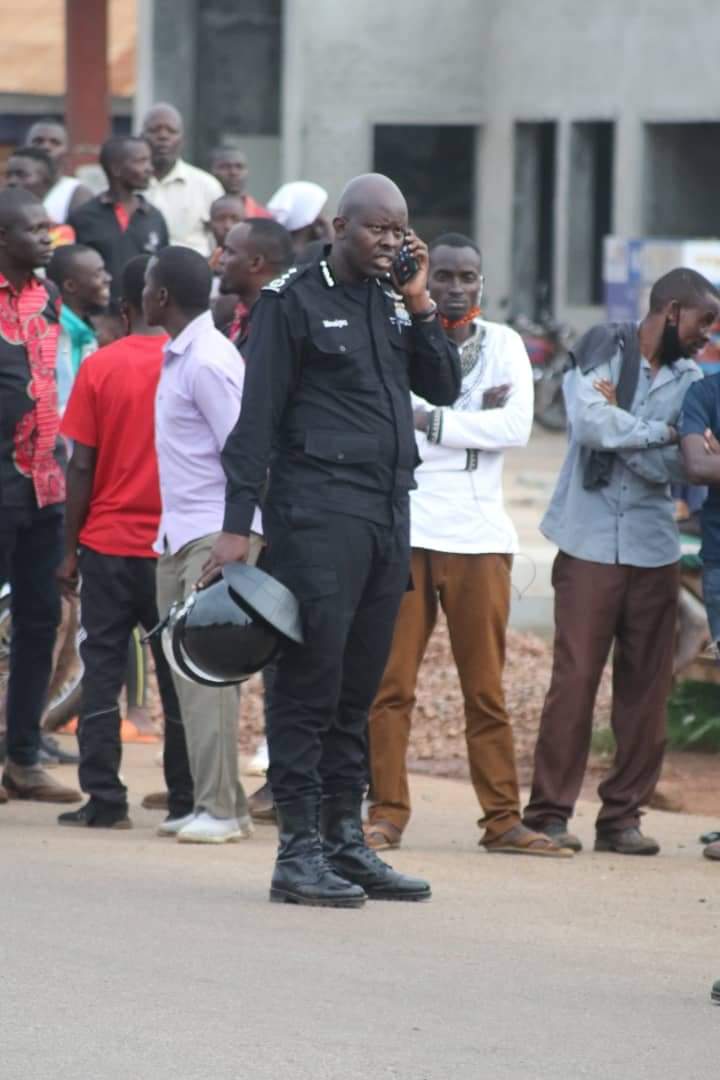 Frank Mwesigwa, one of the best trained Counter Terrorism officers in the country was dropped in 2018 and replaced by Moses Kafeero as Kampala Metropolitan Police Area commander ( PHOTO/Courtesy).KAMPALA— Commissioner of Police Frank Mwesigwa, Commandant Tourism Unit has come under fire for commanding brutal operation that saw presidential candidate Robert Kyagulanyi also known as Bobi Wine arrested.
Police and military on Wednesday in Luuka blocked a rally that Bobi Wine was slated to address — claiming his rally was in violation of guidelines issued by the Electoral Commission and the Ministry of Health, forbidding political gatherings of more than 200 people.
The Electoral Commission issued guidelines to curtail the spread of the Corona virus which has so far killed 158 Ugandans, while more than 1,714 are infected.
Videos circulating from Luuka show Bobi Wine being violently pushed into a waiting police truck as he protested.
He was later taken to Nalufenya police station in Jinja where he was being held by press time.
Bobi Wine’s arrest followed a press briefing called by the Police Director of operations, Assistant Inspector General of Police Edward Ochom, who announced that the Force would clump down on political aspirants who continued to flout the regulations of the EC. Mr Ochom told journalists that police had intensified enforcement of the EC guidelines. After the arrest, Mr Ochom claimed Bobi Wine’s rallies which started in West Nile and were now winding up the Eastern part of Uganda before he goes to Western Uganda, were likely to cause the spread of coronavirus.
Police spokesperson Fred Enanga stated that the police had ordered all “territorial commanders” to stop looking on as Ugandans, including presidential candidates flouted the measures to curb the spread of Covid-19.
Following the arrest of Bobi Wine, riots broke out in several parts of the country, with youth burning tyres in the roads and several people were attacked.
Security were forced to swing into action to quell the riots. The riots and ensuing security reactions caused several people to take to social media condemning the actions of security forces and violent rioters.
“Meet CP Frank Mwesigwa, the officer arrested and later sacked from Uganda Police Force in 2019. Today he is commanding police in Bugiri, Iganga and Mayuge, He’s stopped Bobi Wine rally in Bugiri. Criminality aside, why is a ‘Mwesigwa’ commanding police in Busoga” a social media post attributed to a page labeled ‘BM TV Africa’, reads.
In a phone conversation with this website, CP Mwesigwa dismissed his critics saying he has never been fired or committed any crimes.
He emphasized that he did not break any laws while taking Bobi Wine into custody. “It is absurd that certain politicians have for a long time tried to draw me into such wars and tarnish my name over the years. I was carrying out my mandate as a police commander, enforcing law and order.You can tell that the social media commentators are resorting to cheap methods to the extent of going tribal and attacking our families. But we shall not be derailed” CP Mwesigwa said.
He added that UPF does not deploy officers basing on one’s tribe but competence and capability. For the general elections, UPF leadership has divided the Country into fourteen zones headed by Senior Officers at the rank of Commissioner and above, CP Mwesigwa is in charge of Busoga region.
Comments

By ReporterSuspending campaigns as a form of protest over the brutal and mindless arrest of our colleagues Patrick Oboi Amuriat and Hon Kyagulanyi Robert can only serve the interests of one person — Museveni.Boycott would...

The Startup Act to be discussed at the Kampala Innovation Week

By ReporterThe global debate surrounding fostering an environment that nurtures sustainable innovation, research and development by starts up is slowly gaining momentum as discussions shift towards policy and government support of the startup ecosystem through...

Osasuna and Huesca have drawn only one of their past four meetings. (PHOTO/Courtesy)Osasuna vs HuescaEstadio El Sadar, Pamplona-IruneaFriday, 20-11-2020 @11pm Two consecutive losses in the league have pulled Osasuna down to the 13th spot in...

Hundreds of Bobi Wine supporters are protesting the arrest of their candidate (PHOTO/Courtesy).KAMPALA – Police have confirmed that 19 people have so far died from the protests that erupted in Kampala and other parts of...