Over 3,000 Jobs to Be Created! Museveni Set To Commission UGX25Bn State-of-Art Market in Soroti – UGNEWS24

Situation in Ethiopia is Under Control – Ambassador

Lauren Aquilina: The pop star who gave up singing

U-20 AFCON: Morley Byekwaso Sets His Sights On Zonal Final

A Tumour In The Brain – UGNEWS24

5 Bad Habits That Will Cost Your Business 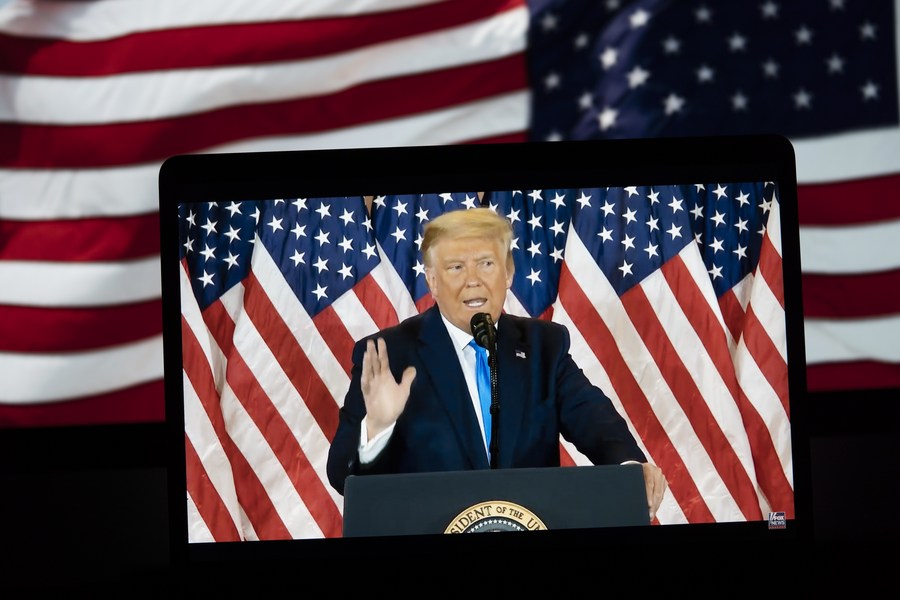 Photo taken in Arlington, Virginia, the United States, on Nov. 4, 2020, shows the Fox News live stream of U.S. President and Republican nominee Donald Trump delivering a statement in Washington, D.C., the United States. (Xinhua/Liu Jie)WASHINGTON — The presidential campaign of President Donald Trump would seek an expedited appeal after a federal judge in the state of Pennsylvania on Saturday dismissed a lawsuit filed by Trump campaign seeking to block millions of mail-in ballots.
Trump’s personal attorney, Rudy Giuliani, and campaign senior legal adviser Jenna Ellis, said in a joint statement that they would seek an expedited appeal to the U.S. Third Circuit Court of Appeals. They said the latest development will help quicken their effort to push the case to the U.S. Supreme Court.
The lawsuit claimed that some counties in Pennsylvania allowed mail-in voters to fix problems with the ballots by casting provisional ballots, which the campaign said were cast illegally for Democrat Joe Biden.
The ruling by U.S. District Court Judge Matthew Brann was made on the grounds that the lawsuit provided “strained legal arguments without merit and speculative accusations, unpled in the operative complaint and unsupported by evidence.”
“In the United States of America, this cannot justify the disenfranchisement of a single voter, let alone all the voters of its sixth most populated state,” wrote the judge, who was appointed by former Democratic President Barack Obama.
U.S. media have projected that Biden has won 306 Electoral College votes, surpassing the 270 votes needed to clinch the presidency. The watershed moment came on Nov. 7, when Pennsylvania was called for Biden, who now leads Trump in the state by over 81,000 votes, a margin believed to be insurmountable even if those erroneously cast ballots were excluded.
For Trump campaign, time is ticking away as Pennsylvania is scheduled to certify its election results on Monday, all but certain to grant its 20 Electoral College votes to Biden.
While Biden has claimed victory, Trump launched a slew of litigations challenging the results in states that, in addition to Pennsylvania, also include Michigan, Georgia, Nevada and Arizona. Most of those efforts have either been withdrawn by the campaign itself or rejected by the courts, which cited the lack of proof as the reason.
Comments

KAMPALA – A group of artists have hit the studio and recorded a song calling upon the president to open entertainment centers and bars so they can start working again. The song dubbed ‘Mzeei Tutte’...

ADDIS ABABA — The number of confirmed COVID-19 cases in the African continent has reached 2,043,462, the Africa Centers for Disease Control and Prevention (Africa CDC) said on Saturday. The continental disease control and...

An order was made to re-sentence all those who had been sentenced to mandatory death (PHOTO/File).MBARARA – The Court of Appeal on Friday delivered six judgments which were pending from the criminal session held at...

Lyon have won all the past three meetkngs with Angers. (PHOTO/Courtesy)Nantes vs Metz Stade de la Beaujoire, NantesSunday, 22-11-2020 @3pm Nantes come into this game in 14th and whilst their form has picked up before...

Napoli are unbeaten in their last 11 Serie A games against Milan. (PHOTO/Courtesy)Fiorentina vs Benevento Stadio Artemio Franchi, FlorenceSunday, 22-11-2020 @2:30pm Cesare Prandelli prepares for his first match since the announcement of his return to...

Freiburg vs Mainz O5 Schwarzwald Stadium, FreiburgSunday, 22-11-2020 @5:30pm These two teams are amongst the worst in the whole competition. In fact, the Breisgau have a single win to their name all through this campaign,...