NRM artists are like ticks and liabilities to Museveni

How Museveni has changed his names on ballot papers 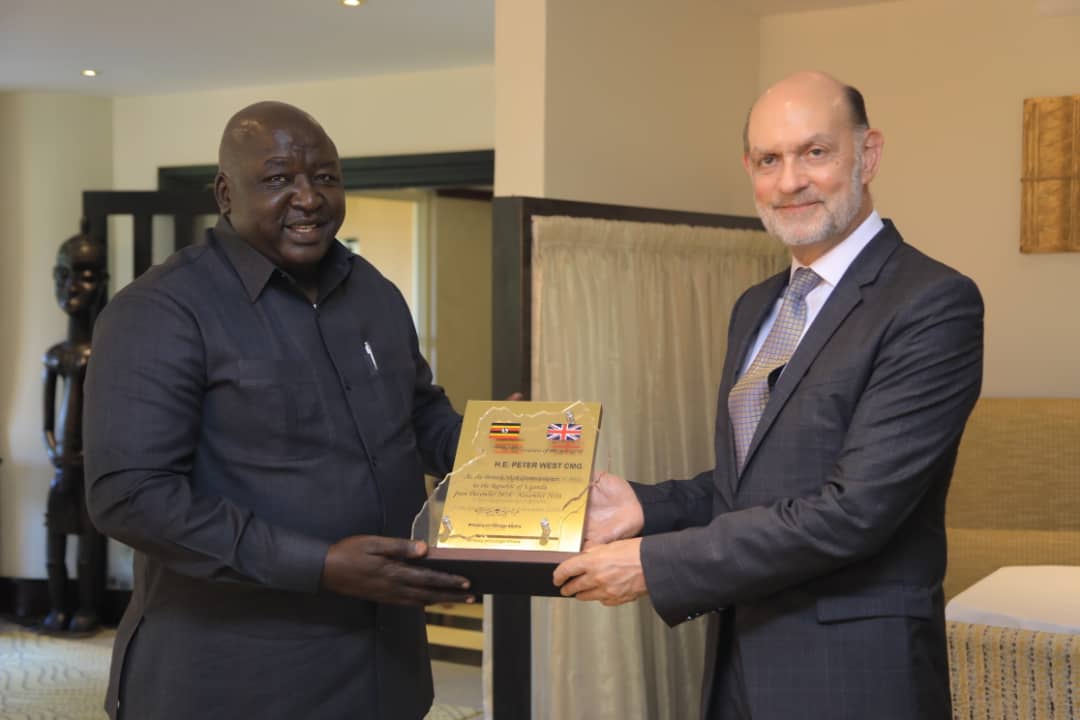 Uganda’s State Minister for International Relations and UK High Commissioner to Uganda Mr. Peter West (PHOTO/Courtesy).KAMPALA — Mr. Okello Henry Oyrem, the Minister of State for Foreign Affairs in charge of International Affairs has on Wednesday, November 4 hosted a farewell luncheon in honour of the outgoing UK High Commissioner to Uganda Mr. Peter West.
Minister Oryem paid an outstanding tribute to the High Commissioner for the significant role he has played in promoting the cordial bilateral relations between the United Kingdom and Uganda.
He also commended the UK Government’s long-term commitment to promoting and funding Uganda’s development initiatives including Recovery Programmes in Northern Uganda, Improving maternal and reproductive health, Driving growth through training, job creation, financial services and trade to mention but a few.
Oryem wished Mr. West a safe journey back and remarkable success in his future assignments.
In his response, the High Commissioner conveyed a message of gratitude to Ugandan administration for all the cooperation and facilities put at his disposal during his tour of duty.
Mr. West further reiterated that UKAID funding would continue to support intiativesand the different development Programmes focusing on poverty reduction, financial accountability, climate change and respecting human rights.
He further pledged to continue promoting the good relations between the United Kingdom and Uganda.
The luncheon was attended by a representative of the Diplomatic Corps, Mr. Kerem Alp, the Turkish Ambassador to Uganda , the Permanent Secretary Ministry of Foreign Affairs Ambassador Patrick Mugoya, Ag. Chief of Protocol, Amb. Charles Ssentongo, Amb. Paul Mukumbya, the Head of Regional Peace Department and Senior Officials from the Ministry of Foreign Affairs and the UK High Commission.
Comments

Mr. Fabian Kasi, the Managing Director of Centenary Bank (PHOTO/Courtesy).KAMPALA — Financial institutions have been commended for the key role they play towards the growth of Micro, Small and Medium Enterprise (MSME) businesses. This was...