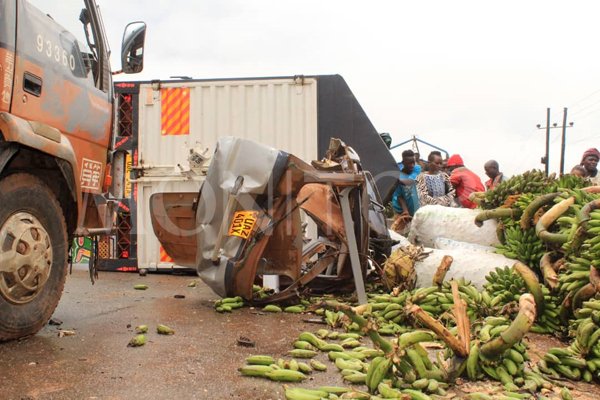 The number of deaths due to road crashes increased last week despite heavy and joint police and military crackdown on errant motorists.

At least 134 people were killed in road accidents in the last two weeks, according to police statistics. At least 77 people died last week and 57 died the previous week.

The Directorate of Traffic and Road Safety spokesperson, Ms Faridah Nampiima, attributed the cause of accidents to the rainy season, reckless driving and using wrong lanes.

“It is the rainy season and most people don’t know how to drive during [this] season. Some of them have not [replaced their tyres], and the wipers do not work making visibility hard, speeding and not respecting road signage,”  Ms Nampiima said yesterday at the police press conference at police headquarters, Naguru, Kampala.

Last week, the police launched an operation dubbed “Towa fujjo barabarani”, loosely translated as ‘we are removing impunity from the roads’.

Although the operation targets all motorists, the focus was placed on errant drivers of government vehicles, who use wrong lanes and break other traffic regulations with impunity.

She said 209 motorists were using wrong lanes while 524 had illegal lights.

Ms Nampiima said the operation would continue, adding that  they were now targeting buses, lorries and hearses that have illegal lights, and sirens.

“Motorists in that category should remove the illegal lights before we do it for them. If we do it, the vehicles will be taken to the Inspector of Vehicles [for examination],” she said.

“He has been seen in different footage from CCTV cameras on the roads and inside campus and these show the same person stealing students’ motorcycles while in the packing of specific buildings as the students are in for lectures or in the libraries,’’ he said.