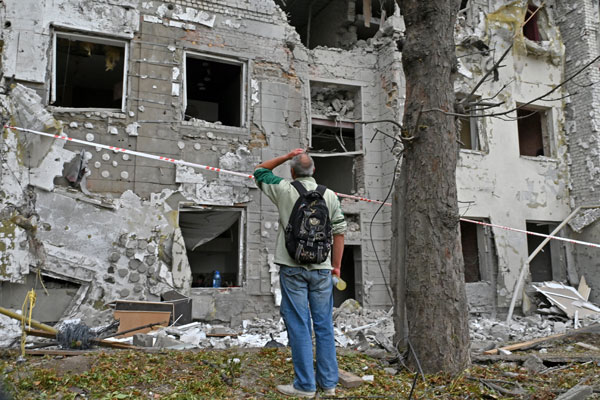 In the picture, Anastasaia and Elizaveta Grigoryeva’s father is faintly smiling, smartly dressed from head to toe in military uniform and holding a puppy to the camera.It’s an image of their father no longer recognisable to the 18-year-old twin sisters — not since he left to fight in Ukraine some six months ago and returned a “broken man”.”He was there for the most intense fighting, under shelling, everything,” Elizaveta tells AFP.

“He says himself, being shelled for six hours will change a man. And so many deaths. He needs medical help,” she adds.The psychological scars her father has brought home from the battlefield has built pressure on a family already at odds over whether the conflict is justified.And their story points to a broader issue, one uncomfortable for the Kremlin — that fighting in Ukraine is taking a harsh toll at home and tearing apart some families. Elizaveta believes many more veterans will return traumatised.The sisters, who are staunchly opposed to the military intervention in Ukraine, live in Pskov near Russia’s border with Estonia.

The medieval city of around 200,000 people is also home to the 76th Guards Air Assault Division — their father’s paratrooper unit.In January, Grigoryev told his daughters he was leaving just for a few days for military drills in Belarus. He wouldn’t return for six months. ‘War is a crime’ His unit took part in the calamitous assault for Kyiv that ended with the Russia’s withdrawal from northern of Ukraine in March.Investigative journalists have placed the unit around that time near the Ukrainian town of Bucha, where Kyiv and international investigators have accused Russian forces of executing civilians.

Russia denies harming civilians but Anastasia and Elizaveta wonder if their father could have somehow been involved.”He says he didn’t kill anyone,” says Elizaveta.”But war is a crime in and of itself,” Anastasia answers.”Yeah, so, supporting or taking part in the war is already a crime,” concludes Elizaveta.The sisters were shocked when Putin announced Russia’s military invention, and in early March took to the streets, carrying signs that read: “Peace in Ukraine, Freedom in Russia.”

Turnout was low at the protest in Pskov and  the sisters were immediately detained.They were threatened with jail time by police but eventually released.

Instead there were ordered to pay a fine equivalent to around 330 euros for “organising” an illegal gathering.While Anastasia and Elizaveta were entangled in legal problems at home, their father’s well-being was deteriorating.In May, the 43-year-old soldier asked his family to start the administrative process needed to return him from the front.He left the battlefield “for health reasons” in mid-June and is now going through the procedure to be discharged from the army after around 20 years of service.”That much stress has changed how he sees the world. He lost comrades. He saw corpses everywhere,” Elizaveta says.New legislation introduced in Russia against maligning the military means he could face jail time if he speaks publically about his experiences in Ukraine.

Need ‘democracy at home’ But in the privacy of his home and cottage in the countryside, his daughters said he spoke openly about what he witnessed.They say however that he sometimes becomes aggressive, and the three fight regularly. He is not seeking psychological help.The girls left the family home last month after the situation there had become untenable.A women’s rights organisation helped them find a flat to live in, and they are partly living off money they gathered from a crowd-funding campaign for their fine.Still, they do not want to break ties entirely with their family.

“We love our father. We’re not going to reject our own family,” Elizaveta says.But she and Anastasia say they avoid speaking about the conflict with their father and 38-year-old mother.Unlike their parents — who like many Russians of their generation stay clear of politics — the sisters are still politically active and became interested in politics from an early age.They said they had been drawn in by the sleek video investigations and political statements of Kremlin critic Alexei Navalny, who is serving a sentence for fraud. The sisters say they have no intention of halting their political activism despite their parents’ disapproval.They are “absolutely not afraid” of being imprisoned and even admire “the strength” of Ukrainian people who they say are facing extreme violence.  “We’re liberal,” says Elizaveta. “We criticise the government. We need to build democracy at home.”