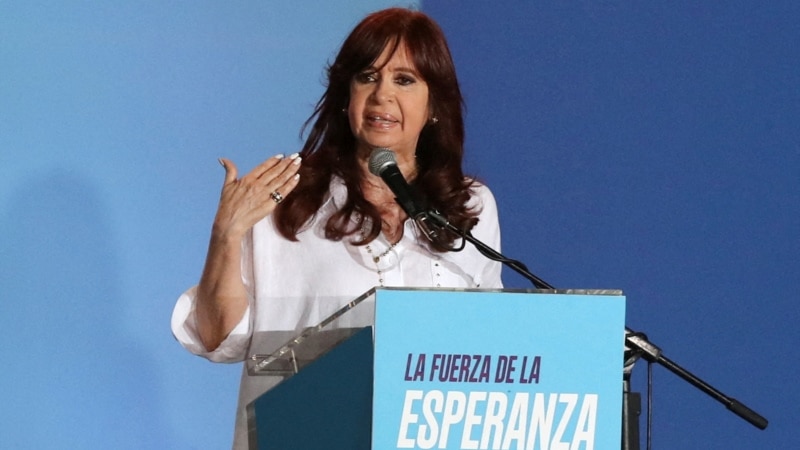 buenos aires, argentina —
Argentine Vice President Cristina Fernandez de Kirchner was convicted and sentenced Tuesday to six years in prison and a lifetime ban from holding public office for a fraud scheme that embezzled $1 billion through public works projects during her presidency.
A three-judge panel found the Peronist leader guilty of fraud, but rejected a charge of running a criminal organization, for which the sentence could have been 12 years in prison. It’s the first time an Argentine vice president has been convicted of a crime while in office.
The sentence isn’t firm until appeals are decided, a process that could take years. She’ll remain immune from arrest as long as she can keep getting elected.
Speaking after the verdict, she described herself as the victim of a “judicial mafia.”
Her supporters vowed to paralyze the country with a nationwide strike. They clogged downtown Buenos Aires and marched on the federal court building, beating drums and shouting as they pressed against police barriers.

Supporters of Argentine Vice President Cristina Fernandez de Kirchner, a former president, cry after hearing the verdict and sentence in a conspiracy and fraud trial against her in Buenos Aires, Argentina, Dec. 6, 2022.

Fernandez roundly denied all the accusations. Argentina’s dominant leader this century, she was accused of improperly granting public works contracts to a construction magnate closely tied to her family.
The verdict is certain to deepen fissures in the South American nation, where politics can be a blood sport and the 69-year-old populist leader is either loved or hated.
Prosecutors said Fernandez fraudulently directed 51 public works projects to Lazaro Baez, a construction magnate and early ally of her and her husband Nestor Kirchner, who served as president from 2003-2007 and died suddenly in 2010.
Baez and members of her 2007-2015 presidential administration were among a dozen others accused in the conspiracy. The panel sentenced Baez and her public works secretary, Jose Lopez, to six years. Most of the others got lesser sentences.
Prosecutors Diego Luciani and Sergio Mola said the Baez company was created to embezzle revenues through improperly bid projects that suffered from cost overruns and in many cases were never completed. The company disappeared after the Kirchners’ 12 years in power, they said.
In Argentina, judges in such cases customarily pronounce verdicts and sentences first and explain how they reached their decision later, but given the public pressure in this case, they could offer some details before the panel’s full decision is read out loud in February. After that, the verdict can be appealed to the Supreme Court, a process that could take years.
Cristina Fernandez, who last month compared her judges to a “firing squad,” characterizing the judiciary as a pawn of right-wing forces including opposition media and Mauricio Macri, who succeeded her as president, said Roberto Bacman, who directs Argentina’s Center for Public Opinion Studies.
“So we already know how she’ll be attacked and also how Kirchnerism will defend her, which is to consider her a victim of ‘lawfare,’ just like Lula (President-elect Luiz Inacio Lula da Silva) faced in Brazil or what the former president of Ecuador (Rafael Correa) currently faces,” Bacman said.
Either way, she remains the singular leader of the leftist faction of the Peronist movement.
Meanwhile, other cases remain pending against her, including a charge of money-laundering that also involves her son and daughter.