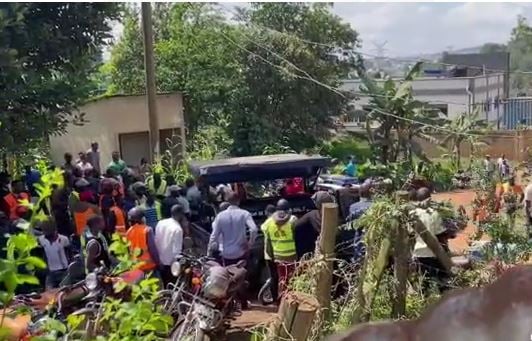 Police in Kampala said Friday that they have launched a manhunt for an armed driver in a UPDF Toyota Land Cruiser after he allegedly shot and killed a boda boda motorcyclist at Kawanda Senior Secondary School in Nakisangye Zone, Nabweru Division in Wakiso District.

“Preliminary investigations into the matter indicate that Ssali was leaving the school when he met a number of motorcycles and cars at the gate. The road being narrow, this prompted him to squeeze on the side where the deceased had parked. This caused an altercation after Waligo complained to the driver of being squeezed which attracted a big group of riders that also condemned his action,” ASP Owoyesigyire said.

Ssali later went to his car and picked an AK47 which he used to shoot at Waligo before he fled the scene.

“We have been able to identify the vehicle with the help of CCTV cameras. The number plate of the said vehicle has been identified by the police as H4DF 1939.  The police was invited at the scene where they noted that Waligo was shot on the left shoulder and the bullet came out from the right shoulder, something that killed him instantly. We also recovered a motorcycle Bajaj Boxer UEG 721c that belonged to the deceased at the scene of crime. The territorial Police at Kampala Metropolitan will liaise with the UPDF to help identify the driver for statement recording and Prosecution.,” the police publicist added.

Waligo’s body was taken to the city mortuary at Mulago National Referral Hospital in Kampala for postmortem as investigations continue.“We condemn such acts of road rage which have led to this shooting and murder and we appeal to members of the public to always look for alternative ways of solving such small issues instead of turning violent,” ASP Owoyesigyire urged.