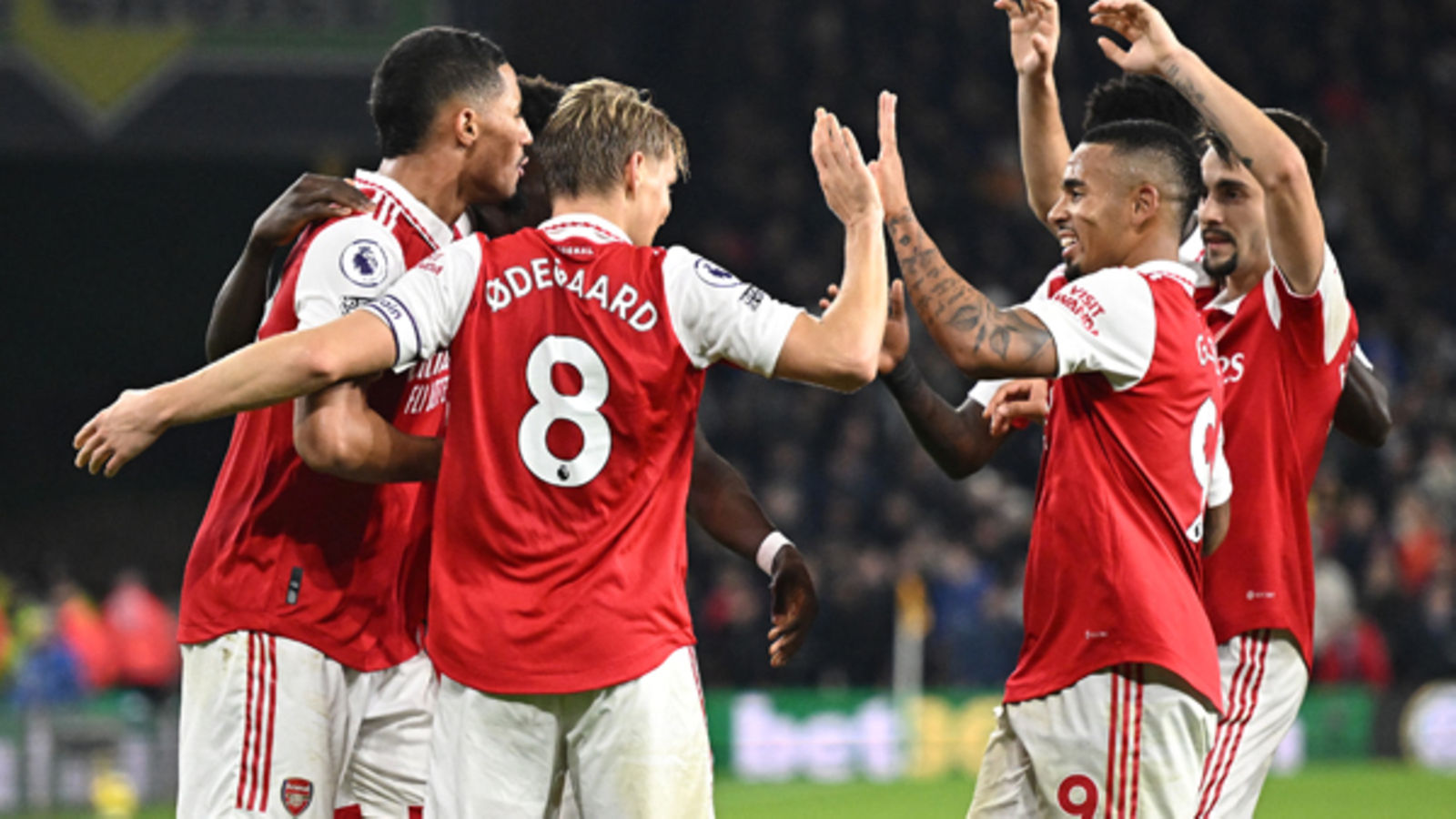 Arsenal head into the World Cup break five points clear at the top of the Premier League after they beat Wolves 2-0 on Saturday as Manchester City suffered a shock 2-1 home defeat to Brentford.

Newcastle remain in third after inflicting Chelsea’s third consecutive league defeat 1-0 at St. James’ Park, while Tottenham scored twice in the final 10 minutes to win a 4-3 thriller against Leeds.

City had not lost at the Etihad since February, but were stunned by Ivan Toney’s response to being left out of England’s World Cup squad.

The Brentford captain headed in his 10th goal of the season to give the Bees an early lead, but City responded before half-time thanks to Phil Foden’s sumptuous strike.

Pep Guardiola warned ahead of the game that his side might have one eye on the World Cup with 10 of the City starting XI heading to Qatar.

A lacklustre City performance was punished in the eighth minute of time added on when Brentford cut open Guardiola’s men on the counter-attack and Toney tapped in Josh Dasilva’s cross.

“The better team won,” conceded Guardiola. “We had a lot of problems and we could not press as they didn’t allow us.”

Thomas Frank hailed the result as perhaps Brentford’s best ever as they moved up to 10th in the Premier League.

“Speaking to some people from the club, this is probably the single biggest ever result,” said Frank. “Against one of the richest clubs in the world and we have one of the lowest budgets in the division.”

Arsenal took full advantage to set up an intriguing title battle when the Premier League returns from a six-week hiatus on Boxing Day.

Martin Odegaard led by example for the Gunners as the Norwegian fired home twice from close range in the second half.

New Wolves boss Julen Lopetegui was in the crowd before officially taking charge on Monday and has work to do in the second half of the season with Wanderers now bottom of the table.

Tottenham once again had to come from behind after goals from the in-form Crysencio Summerville and Rodrigo either side of Harry Kane’s equaliser put Leeds in front at half time.

Jesse Marsch’s men won 4-3 against Bournemouth last weekend, but were this time on the receiving end of a thrilling comeback.

“I feel like someone has ripped my heart out,” said Marsch.

Tottenham have made a habit of late fightbacks this season and rescued the three points as Rodrigo Bentancur scored twice in the final 10 minutes.

The Magpies are just two points adrift of City after a run of 22 points from a possible 24.

“I feel immense pride at how the players have performed consistently,” said Newcastle boss Eddie Howe. “Now the challenge is to maintain and enhance that.”

Liverpool signed off until Boxing Day on a positive note as Darwin Nunez struck twice against Southampton.

Roberto Firmino’s header opened the scoring inside six minutes at Anfield, but in Nathan Jones’ first game in charge, the Saints responded immediately through Che Adams.

Nunez has been erratic since his 75 million euro ($77 million) signing from Benfica, but the Uruguayan is already up to eight goals in his debut season at Liverpool after two cool finishes before half-time.

Leicester’s rise up the table continued but there were fears it could come at a cost for England.

James Maddison’s stunning form forced his way into Gareth Southgate’s World Cup squad and he opened the scoring with his seventh goal of he season.

The midfielder hobbled off shortly after, but played down the seriousness of the problem.

“Injury isn’t too bad!” Maddison tweeted. “A small problem that was causing a bit of soreness. Can’t wait to meet up with the lads Monday.”

Harvey Barnes added a second for the Foxes 12 minutes from time to leave West Ham one point above the relegation zone.

Everton are also only a point above the bottom three after a 3-0 thrashing at the hands of Bournemouth.

Marcus Tavernier, Kieffer Moore and Jaidon Anthony were on target for the Cherries and there were angry confrontations between the Everton players and travelling support at full-time.

Nottingham Forest moved off the bottom as Morgan Gibbs-White scored the only goal of a 1-0 win over Crystal Palace.