Bees will give you more

Bees will give you more 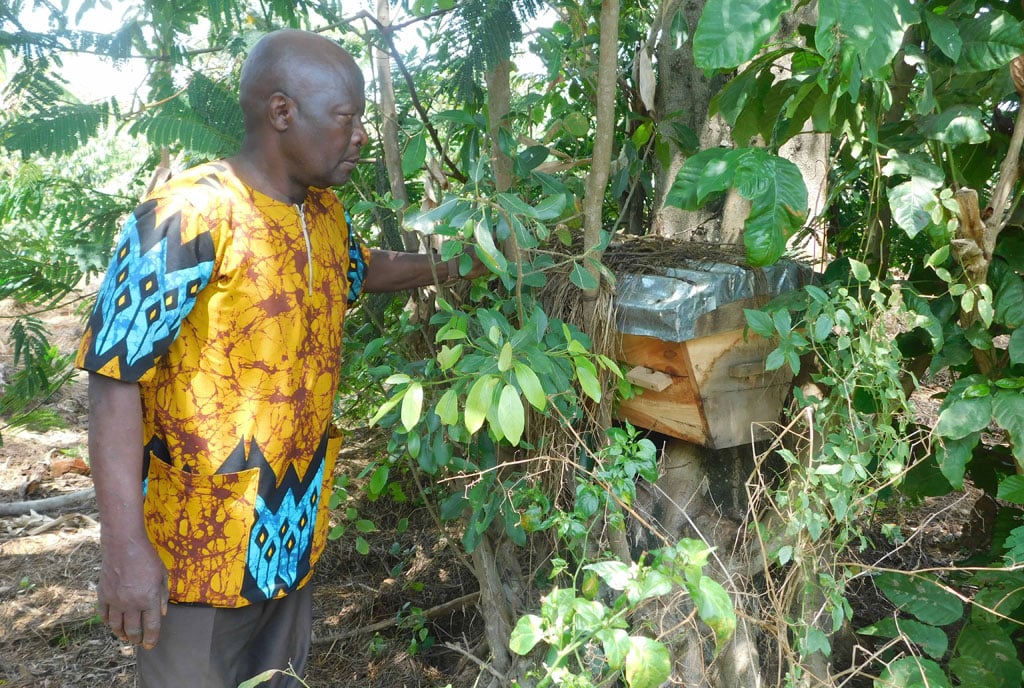 “Any effort towards promoting agriculture should begin with increasing the population of bees,” he says.

Nyanzi, a resident of Bulayi Village in Mukungwe Sub-county, Masaka City has been a bee keeper for nearly 15 years after abandoning growing crops in the nearby swamp as he told Seeds of Gold in an interview recently.

“Ms Rose Nakyejwe, the District Environment Officer who persuaded us to stop growing crops in the swamp told us to go back to our gardens up-hill and dig water trapping trenches across the fields because the soil fertility in the wetland is taken there from uphill by the runoff water. She also told us to get into well-paying economic activities such as bee keeping before subjecting all of us to bee-keeping training sessions,” says Nyanzi.

He has since learned that bees play a key role in pollination of both food and cash crops and that without them agricultural production will be greatly hampered. “It is therefore strange that many of the poverty alleviation programs, such as Operation Wealth Creation (OWC), give out such items as fertilisers, coffee seedlings, fruit tree seedlings, banana suckers, and livestock, to poor farmers. OWC should start talking about apiary as something that can bring money to the farmers,” he says.

He says beekeeping should take the biggest share of the national agriculture budget because bees are not only important for honey production which is a big source of income but they are also pollinators of crops. Successful agriculture is difficult to achieve without honey bees.

Another bee keeper in Masaka, Charles Rwewundiza, who is also MIBA secretary for information, says that increasing urbanisation and crowded human settlement are driving away bees and reducing their populations. “When forests are cut down the bees must relocate,” he says. “When land is cleared for housing or road construction the bees must go elsewhere. And when farmers carelessly apply pesticides and herbicides the bees are killed. The irony is that the agrochemicals are used to boost crop production yet they kill the bees which are essential for crop pollination,” says Rwewundiza.

He illustrates his point by mentioning the number of beekeepers per sub-county in Masaka District. Bukakkata Sub-county which is most sparsely populated in the district has 300 bee keepers and the others follow as indicated here: Buwunga Sub-county 170, Kabonera Sub-county 140, Mukungwe Sub-county 85, Kyannamukaaka 76, Kyesiiga Sub-county 37, and Katwe-Butego Sub-county 36. He disclosed that together with other bee keepers he is pushing for the formation of a parliamentary motion to pass a law for heavy punishment of people who poison bees by careless usage of agro-chemicals or burning bees or mistreatment of bees of any kind, whether wild or farmed. One of the reasons Rwewundiza wants farmers to desist from using pesticides to kill weeds is that even weeds provide nectar and pollen to the bees.

“If honey is found to be medicinal it is because the bees visit so many different herbs, some of which are medicine,” he says.

He said the advent of climate change has compounded the problem of reduced honey bee populations. “When drought sets in there are no flowers and therefore the bees cannot collect nectar and pollen which are turned into their food. When we harvest the honey and wax we are actually stealing their food which they must restore in the next rainy season. And if the rains fail to come the bees can die,” he says.

He is however encouraged by the new interest large scale coffee farmers and eucalyptus tree planters have taken in bee keeping.

“We do not have them as members of our association, but they are turning to us to help them place hundreds of bee –hives in their farms and eucalyptus forests —- a job for which we are well paid,” he says.

He says coffee flowering seasons are the best for pollen and nectar collection for the bees.

The Karamoja region is estimated to be producing 368,380 kilogrammes.Entomologist Godfrey Ssenkaayi, says most people in the central region are not yet aware that a household can make good financial progress just by keeping bees.

“They believe in other farming enterprises that are not so well paying,” he says.

“For example, to get Shs3m a beekeeper sells only six jerricans of honey which can be obtained from 15 beehives. However it would require a large space of land for the farmer to grow beans or maize to get that much money. Moreover the farmer growing maize or beans can still place beehives in the garden and kill two birds with one stone,” Ssenkaayi explains.

Both Nyanzi and Rwewundiza are grateful to Ssenkaayi for training farmers in modern apiary practices including harvesting and handling. They now have modern equipment such as protective gear, smoker pump, and a honey refractometer to ensure good honey quality.

A litre of honey costs Shs25,000. From five beehives a farmer can harvest at least 24 litres of honey. Harvesting is done twice a year according to Ssenkaayi. The apiary farmer does not have to worry so much about inputs because there are not so many after purchasing the beehives, the harvesting equipment, and protective gear.

Bees can be kept alongside other farming enterprises such as coffee growing, banana growing, or maize growing, not to mention tree farming.  A beekeeper sells wax apart from honey. Some people also make wine from honey combs after squeezing out the honey.

From five beehives a farmer can harvest at least 24 litres of honey. Harvesting is done twice a year according to Godfrey Ssenkaayi an entomologist.