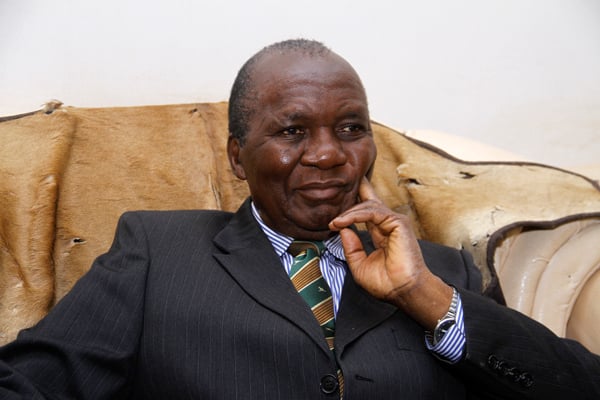 Several distinguished leaders and politicians in Uganda have paid tribute to former Democratic Party president and two-time presidential candidate Dr Paul Kawanga Ssemogerere who died at his home in Rubaga Division, Kampala on Friday morning.Ssemogerere who has been unwell for a long time died at around 4am on Friday at the age of 90.Among the people who have eulogized the pro-democracy icon is Speaker of Parliament Anita Among who described him as a statesman and distinguished leader who dedicated his life to the serving Uganda.

“On behalf of  Parliament, I send heartfelt condolences to the family of the Hon Paul Kawanga Ssemogerere , the Democratic Party fraternity and the Country at large upon the loss of a statesman and distinguished leader who dedicated his life to the service of Uganda,” Ms Among tweeted moments after Mr Ssemogerere wa announced dead.

According to former presidential candidate, Dr Besigye, Dr Ssemogerere has been Uganda’s leading icon of struggle for democracy and good governance.”Never rested; never got discouraged; never got bitter; never lost his gentle smile…till this morning. What a loss at a most demanding time! Our thoughts and prayers are with his family and friends,” the former Forum for Democratic Change (FDC) president tweeted.
The National Unity Platform (NUP) leader, Mr Robert Kyagulanyi popularly known as Bobi Wine said Dr Ssemogerere stands tall amongst the giants of history.“Today is a very dark day. Words cannot describe this loss. Mzee Paul Kawanga Ssemwogerere stands tall amongst the giants of history. May his legacy live forever,” Mr Kyagulanyi said of the man many politicians, including Kampala Lord Mayor Erias Lukwago considered their mentor.

Earlier, Mr Lukwago told journalists that Dr Ssemogerere dedicated his life on uniting forces of change in the country with hope that he would live to see a better Uganda.“He was a strong man and has been pursuing unity. It’s really sad that he has not lived to see the moment he worked so hard for. He’s been a true statesman and a godfather to many of us. He’s been our mentor. Since I cut my political teeth, I have been in his hands and he has always molded us,” Mr Lukwago told journalists at Ssemogerere’s home on Friday.

“I have just learned of the passing of Dr. Paul Kawanga Ssemogerere! We have lost a great statesman. I had the privilege of drinking from the well of his wisdom. I admired his intellect and humility. Blessed are the peacemakers!,” Mr Mpanga tweeted.To the ruling National Resistance Movement (NRM) Secretary-General Richard Todwong, Dr Ssemogerere was a good steward to the Democratic Party.”We have learnt with sadness about the demise of one of our historical leaders Dr Paul Ssemogerere who was one of the founding members of the Democratic Party(DP).We thank him for the stewardship he offered to the DP and the country at large. May his soul rest in perfect peace,” he said.

More tributes National Unity Platform party “We have learned about the untimely death of Dr. Paul Kawanga Ssemogerere. We are alive to the fact that we stand on the shoulders of freedom fighters like him who came before us in resisting this dictatorship.  We send our deepest condolences to his family for such a tragic loss”.Former Presidential Candidate John KatumbaJust learnt of the death of former Former Democratic Party president-general Paul Kawanga Ssemwogerere. So sad RIP

Bukoto Central MP Richard SebamalaIt’s such VERY SAD news for the loss of a Great man, Mentor, former Presidential candidate in the early 1980s and DP Guru. Your contribution in the politics of this country will always be remembered.

NRM partyWe mourn the death of Dr. Paul Kawanga Ssemwogere, former Minister and President General of the Democratic Party. We extend our condolences to his family, friends and fellow citizens.

Secretary to the Treasury Ramathan GgoobiMy deepest sympathy goes to my economics teacher Prof Germina Ssemogerere and the entire family. Wishing you peace, comfort, courage, and lots of love at this time of sorrow. May the Soul of the old man rest in eternal peace. Inna Lillahi…

Chief Opposition Whip and Bududa district John Baptist NambesheWith the passing of Mzee Dr Paul Kawanga Ssemwogerere, the cruel hand of death has robbed us of a selfless leader & mentor who was a role model to many of us. Mzee PK’s hand in the unyielding hope he had for democracy & the prosperity of Uganda will always be with us. R.I.P

I & a myriad of others truly regret the demise of Dr Ssemogerere.A genuine,respectable, iconic nationalist whom I had the privilege to engage in impassioned, stimulating &intellectual political debates that pointed to the future direction of our country.What a [email protected]