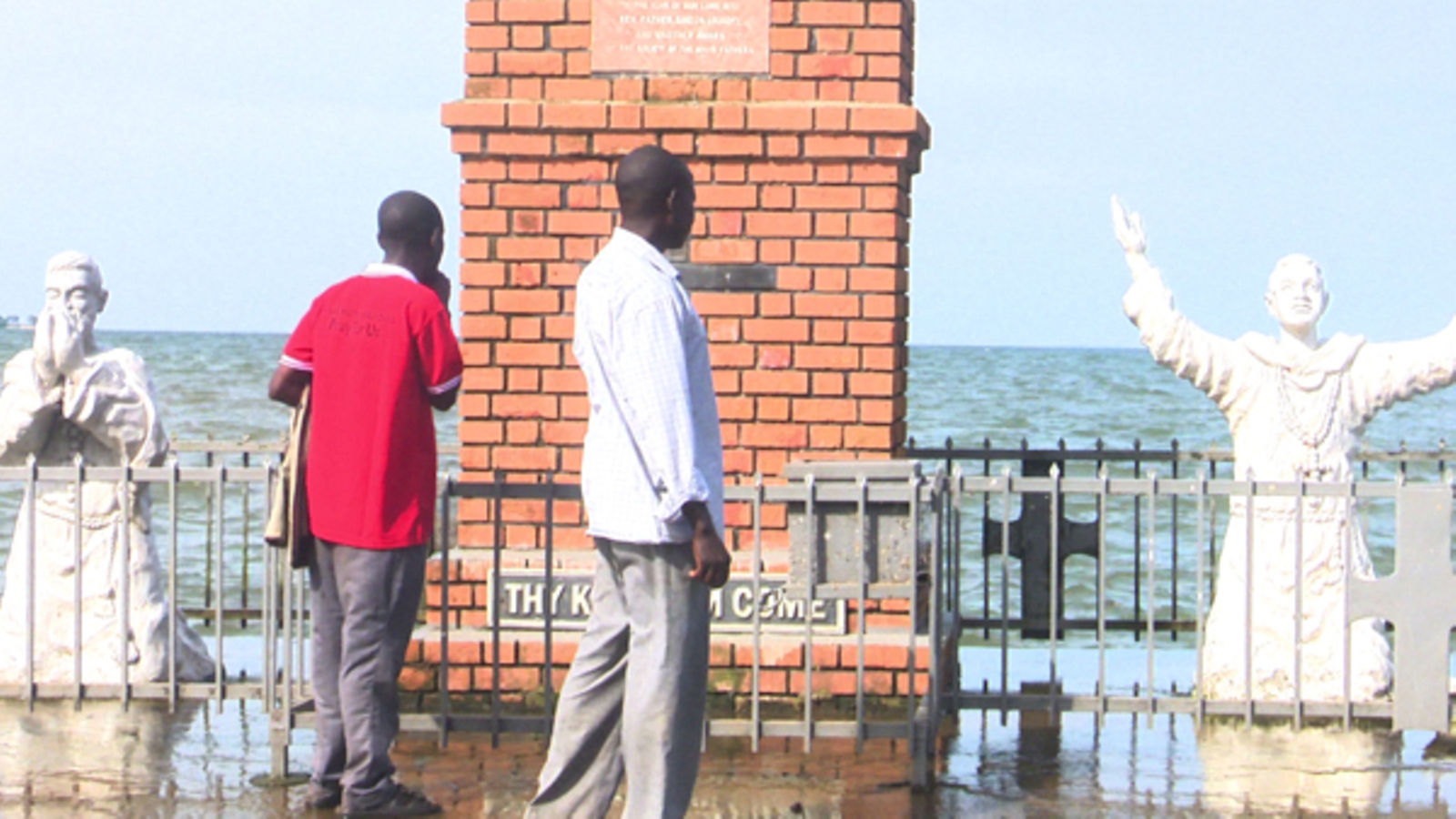 In June of 2020 as Uganda grappled with its first metaphorical coronavirus wave, a literal wave was threatening trouble of its own at Kigungu peninsula. The waters of Lake Victoria bobbed up and down against Kigungu Missionary Landing Site. The ferocity was probably similar to the waves that forced the stricken canoe of two French missionaries—Fr Simeon Lourdel (alias Mapeera) and Brother Amans—to dock at the peninsula on February 17, 1879.

The Lake Victoria Basin Commission had revealed that months of intense rain ballooned the lake to the point that its water levels scaled a height of 13.4 metres (44 feet), shattering the previous 1964 record. The rising waters also visited their wreck upon Kigungu Catholic Church.

“When the wind is too much, the water tends to pass through the ventilators and fills the church,” Robert Segawa, a church leader, described the trail of destruction back then.

A disorderly pile of pews showed that the church leadership opted to outpace mother nature’s challenges instead of denying their existence. Success, though, was a glacial process.

The church was built in 1933 to pay homage to Father Lourdel and Brother Amans. The two were the only members of the First Caravan of a Roman Catholic society known as the White Fathers that dared to cross from Tanzania to Uganda via Lake Victoria. A challenging journey, by any measure.

When they docked at Kigungu peninsula, their arrival marked the birth of Catholicism in Uganda. A plaque on the monument at Kigungu Missionary Landing Site says as much.

It reads thus: “On this spot landed the first Catholic missionaries of Uganda on the 17th day of February in the year of our Lord 1879; Reverend Simeon Lourdel and Brother Amans of the society of the White Fathers.”

The ebb and flow and Lake Victoria’s waters continue to buffet the monument to this day, posing an existential threat to it and indeed the church. This—in a twisted way—makes the statues of two men either side of the monument apt. Both in a kneeling posture, one of the men is in prayer; whilst the other raises their arms toward the heavens.

The church, which essentially squats rather awkwardly on the birthplace of Catholicism in Uganda, could do with divine intervention.

“You cannot access the church if the wind is striking the lake repeatedly and violently,” Mr Mutebi Nyasio, a local parishioner, told Saturday Monitor.

While the shrines at Namugongo have over the years been beneficiaries of the odd fresh coat of paint, Kigungu Catholic Church can barely scrape by. This is much to the chagrin of local parishioners and community leaders alike.

“There would be no Namugongo if Father Lourdel and Brother Amans were not able to take sanctuary in this place,” Mr Richard Ssekyondo, the chairperson of Entebbe Division B, said bluntly.

Father Lourdel and Brother Amans are believed to have recuperated in Bugonga for a week before travelling to Kampala on foot. There, they would meet Kabaka Muteesa I at his capital of Banda-Kampala. With hindsight, local parishioners in Bugonga say it beggars belief that their backyard is nowadays worthy of mention only as an afterthought.

“The late Archbishop Cyprian Kizito Lwanga had promised to work on this church, but his death has left us with no answers,” Mr Vincent Seremba, a youth leader at Kigungu Catholic Church told Saturday Monitor, adding: “Whether this will ever come to pass remains to be seen. For now, the conversation on the church has gone silent.”

At least one thing that Father Lourdel and Brother Amans left in Bugonga before they departed for Banda-Kampala still stands. Along with their passion for missionary work that would soon distinguish them in Uganda, Father Lourdel and Brother Amans loved nature. They brought with them seedlings from Tanzania, one of which was planted in Bugonga. The tree is now aged 143.

“Our believers use it as medicine to heal many diseases, including malaria,” revealed Rev Fr Gerald Mpanju, the parish priest of Bugonga.

There remains vestiges of hope that some day the birthplace of Catholicism in Uganda will rise like some phoenix from the ashes. For now, though, it firmly remains Namugongo’s second cousin.