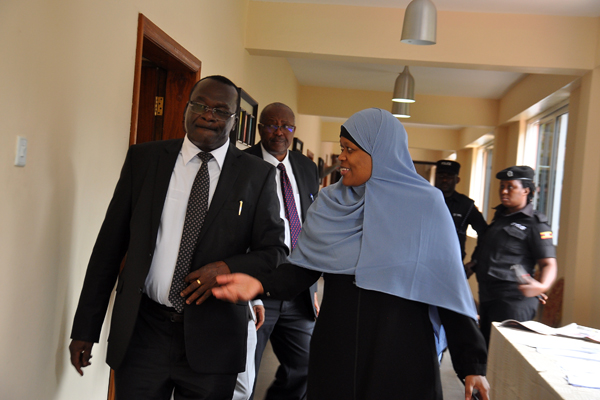 The Chief Justice of Uganda, Alfonse Owiny Dollo has revealed that there’s a need for over 2,000 magistrates and over 150 judges in order to solve the problem of case backlog in courts of law.

“The target is to have a chief magistrate in every district and a grade one magistrate per sub-county because without numbers we can’t go far and if we can achieve this, then there’s no reason why a matter should stay in court for more than one year,” he said.

The Chief Justice made the remarks while opening a two-week induction of 17 judges that have been elevated to the High Court. The event took place at the Imperial Golf View Hotel in Entebbe on Wednesday.

He also warned lazy and corrupt judicial officers to quit if they are not willing to perform their duties in the existing environment.

“For lazy judicial officers who seem not to understand the law, we will try to help them through training but corruption, no that’s beyond the red line. It’s a no-go area because the door for corrupt people to leave the judiciary is so wide and the door for entry into judiciary is so narrow,” Justice Owiny Dollo noted.

The Principal Judge Dr Flavian Zeija in his speech read by the High Court judge Musa Ssekaana, said: “Our collective prime responsibility is to dispense the justice needs of the people in our respective boundaries of service, in accordance with the law. The exercise of judicial power is both an opportunity and a privilege which comes with an overwhelming need to exercise great responsibility and commitment.”

He added: “The faithful performance of our judicial duties will determine the level of community confidence in the integrity and capacity of the judiciary. It is when the community has confidence in the fairness of the judicial system that ultimately the rule of law will be embraced. Freedom, peace, order and good governance which are the essentials of the society we treasure derive their fruition from our faithfulness and commitment as Judicial Officers.”

He further appealed to them to always consult their colleagues and seek guidance from their seniors and supervisors when they are not sure about something and the errors will be minimal.

She added that IDLO through financial support from the Embassy of Sweden in Uganda is committed to supporting the Judiciary through the Judiciary Training Institute to enhance the capacity of its judges and thus develop globally recognised and best jurisprudence emanating from Uganda.