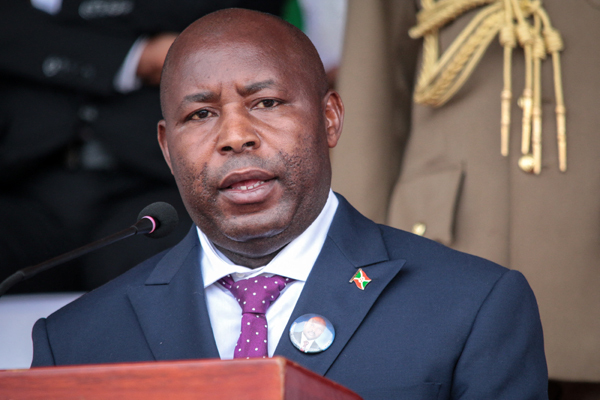 Burundi’s President Evariste Ndayishimiye has faced a tricky balancing act to bring change to the troubled nation while accommodating the elites who helped put him in power, even as activists warn that his government’s human rights record remains dire.

But he has been praised for ending the country’s global pariah status, prompting the United States and the European Union to lift sanctions.

Since he took power in June 2020, the former army general has taken some high-profile steps to distinguish his regime from that of his predecessor Pierre Nkurunziza, whose brutal crackdown on political opponents in 2015 left 1,200 people dead.

But his talk of a “coup” plot against him, followed by a purge of top officials, including former prime minister Alain Guillaume Bunyoni, was a reminder of his authoritarian roots.

Handpicked by the ruling CNDD-FDD party to run in the 2020 elections, Ndayishimiye, 54, was expected to remain under the wing of Nkurunziza, who was known as Burundi’s “eternal supreme guide” until his sudden death in June 2020.

At first, there was little sign that Ndayishimiye would depart from his predecessor’s policies.

His maiden speech as president featured a long homage to Nkurunziza as he vowed to follow in his footsteps, lambasting the international community for interfering in Burundi.

But he soon began to chart a different course.

He declared the coronavirus pandemic “the greatest enemy of Burundians”, sharply breaking with Nkurunziza who denied the gravity of Covid-19.

Whereas Nkurunziza had closed off the country — feuding with neighbours, expelling diplomats, and blacklisting UN investigators — Ndayishimiye ventured abroad, slowly putting Burundi back on the map.

Earlier this year, the United States and the European Union resumed aid flows to the impoverished landlocked nation of 12 million, despite warnings from rights campaigners.

“He would like to go further, but faces stiff resistance.”

According to analysts, the real levers of power in Burundi are operated by a cabal of military leaders, known as “the generals”, which was forged underground when the CNDD-FDD was a Hutu rebel movement.

The president himself alluded to his isolation during a speech in 2021.

“There are those who tell me I will die of exhaustion trying to flush out wrongdoing from top to bottom,” he said.

But, he added, “how do you expect me to do that when I haven’t found anyone to help among my staff?”

Described by those who know him as more open-minded than many in the CNDD-FDD, Ndayishimiye, widely known by his nickname “Neva”, is not associated with the worst abuses carried out by his predecessor’s regime.

But neither did he stand out for trying to rein in the violence that erupted after the 2015 election, when Nkurunziza won a third term seen by many as unconstitutional.

The killings sparked an exodus and a UN commission accused the government of gross abuses including summary executions, rape and torture.

Ndayishimiye “gives the impression of a real sincerity in wanting to improve things,” said one diplomat in Bujumbura, the country’s economic capital.

But others point out that Ndayishimiye has himself spent years as a high-ranking ruling party cadre, and question how far he is willing to change the status quo.

“After Nkurunziza, we are moving into a phase of decompression, but that doesn’t change the DNA of the regime,” said Thierry Vircoulon, a specialist in Central Africa at the French Institute of International Relations.

“The power remains the same, that is to say fundamentally authoritarian.”

Ndayishimiye had only just begun his studies at the University of Burundi when civil war broke out in 1993, costing at least 300,000 lives.

He was in his second year of law school when extremists from the Tutsi ethnic group massacred dozens of Hutu students on campus. He narrowly escaped, putting down his pen to take up a gun.

He rose through the ranks and became the CNDD-FDD’s main negotiator in ceasefire negotiations that ended the bloodshed in 2006.

In the post-war years, Ndayishimiye held several high-tier positions, including minister of the interior and public security, and as Nkurunziza’s military and civilian chief of staff.

Those who know Ndayishimiye personally describe two sides to him — he is seemingly open to consensus, as well as fiery and quick to lose his temper.

“He’s a rather open-minded man, easy at first, who likes to joke and laugh with his friends,” said one friend who spoke to AFP on condition of anonymity.

“But unlike Nkurunziza… Evariste Ndayishimiye can be quite angry and gets carried away very easily, and risks becoming infuriated.”