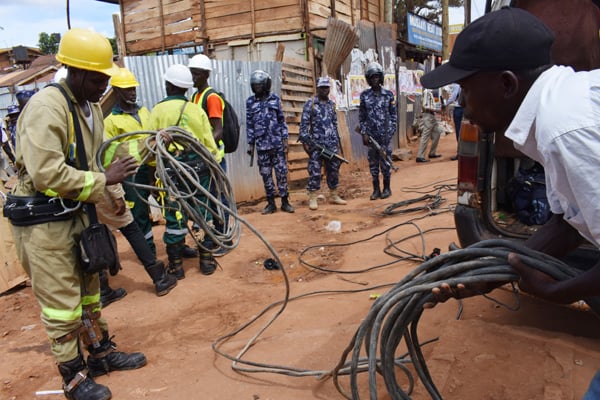 The debate is raging on what should be done to curb vandalism of utility infrastructure as the vice reaches worried levels despite the new laws that impose heavy punishment on culprits.

On Saturday, vandalised towers of Uganda Electricity Transmission Corporation Limited (UETCL) on the Jinja-Lugogo line collapsed leaving many parts of eastern part of Kampala Metropolitan in a black out at the weekend.

The UETCL managing director, Mr Michael Taremwa, attributed the power loss to vandalism of their two towers in Buikwe District.

In a statement issued on Sunday, UETCL attributed load shedding to the vandalism of their infrastructure. It will  continue until they are done with the repairs.

Vandals have also targeted railway, telecom and road infrastructure, leaving the government, companies and their customers in huge losses.

Experts in protection of utilities say the current methods to protect the infrastructure are no longer sustainable.

Dr Lammeck Kajubi, the president of Process Control and Automation Engineers Ltd, said the electricity companies should establish real time security monitors on their towers to be able to detect vandals before they damage the infrastructure and then alert the security agencies.

“There should be an intelligent system. There is SCADA (Supervisory Control and Data Acquisition system) at Lugogo in Kampala City. It should be integrated with the line system. With technology, the tower will vibrate if the device detects a human being near it,” Dr Kajubi said.

The electricity companies are yet to install such equipment because of the cost that comes with them.

Mr Taremwa said on his Twitter handle that it is one of the issues that he would follow up on.

A few telecom companies have installed real time monitoring gadgets on the masts and they have changed the design of their towers to get rid of steel bars that are easy to steal.

Mr Yasin Ssekamatte, a security analyst and former chief security officer of a telecom company, said vandalism of telecom base stations, generators batteries and regional switches are high and they have incurred a lot of losses including lives.

Mr Ssekamatte said the telecom companies have bought thousands of these batteries and they are stolen.

Telecom firms and local authorities also have to deal with vandals that have stolen most of their manhole covers.

Many of the manhole covers are made of cast iron or steel. Cast iron is used in making saucepans and it is in high demand in areas like Kisenyi and Katwe townships, where local smiths are based.

The local authorities and telecom companies have resorted to using plastic manhole covers and concrete, which are less valuable.

The Uganda Railways Corporation has lost 20,300 metres of track in the last six months, according to official statistics. According to statistics, the Jinja-Iganga line was the most affected followed by Tororo-Nagongera and Busembatya sections.

Mr Linon Ssengendo, the spokesperson of Uganda Railways Corporation, said the government has deployed the army to protect the railway line.

“We are also partnering with the local leaders to monitor the lines and report to us when there are incidents. We are going to get rid of steel sleepers for concrete ones. The first concrete type sleepers will be built on the Kampala-Mukono section,” Mr Ssengendo said.

Most of the road furniture, guard rails on major highways and the fence on Entebbe Expressway that were erected to protect and guide motorists have been stolen. Uganda National Roads Authority hasn’t yet quantified the cost incurred,  but it is estimated to be in billions of shillings, according to the spokesperson, Mr Allan Ssempebwa. The fence on Entebbe Expressway has also been vandalised despite the presence of armed guards. Road construction companies have resorted to using signs made of plastic to curb  the vice. Kampala Capital City Authority solar lights have also not been spared. The vandals dug out the batteries, which had been hidden in the concrete. The authority has put the batteries at the top of poles, where vandals would find it difficult to climb.