Experts speak out on Ebola in schools

Experts speak out on Ebola in schools 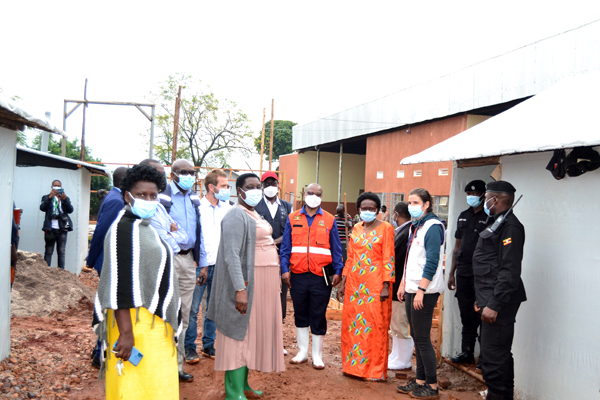 The Minister of Health, Dr Jane Aceng, on Wednesday announced that six children from three schools in Rubaga Division, Kampala, tested positive for Ebola and were undergoing supportive treatment at the Entebbe treatment unit.  The children are said to have been infected by their uncle who came from Kassanda District and slept over at their home in Rubaga, before he was taken to Mulago National Referral Hospital for treatment from where he succumbed to Ebola. The news of the children contracting Ebola received mixed reactions from members of the public, with some suggesting that the schools be closed to contain the spread of the virus among learners.

Dr Munir Safield, the United Nations International Children’s Emergency Fund (Unicef) country representative, said there was no need to close the affected schools but emphasized the importance of schools implementing the standard operating procedures (SOPS) to contain the spread of the disease. “Check the temperatures of all children, teachers, and all people accessing the school. Those with high temperatures should be taken for medical checkups,” Dr Safield said. He added that the school administrators should ensure that children presenting Ebola-like symptoms do not come to school before seeking medical attention and advice.Dr Safield said Unicef, in partnership with the ministries of Education and Health, is distributing temperature guns in all schools where Ebola cases have been reported.

“We started with five districts where the Ebola transmission started including Mubende and Kassanda. This morning (Wednesday) we also distributed the same in the three affected schools in Kampala,” he said. Dr Safield said contacts of confirmed cases will take about 21 days to present symptoms. He added that until they start presenting symptoms, contacts cannot spread the disease. “The Ministry of Health has a very clear policy. Any contact must be isolated. [If the contacts do not present symptoms of the disease] after a recommended number of days, it will take a decision. If the contacts present any signs and symptoms of Ebola, they will be subjected to laboratory tests,” he said.

Dr Samuel Oledo, the Uganda Medical Association (UMA) president, said: “I don’t think the children [with Ebola] exposed their fellow learners to Ebola since they were isolated before reaching a level of being infected.” He added that the incubation period for Ebola ranges between two to 21 days but such patients are highly infectious starting from eight to nine days after exposure.  Dr Oledo urged city dwellers and traders to embrace SOPs, saying if cases keep rising, a lockdown will be instituted.Mr Filbert Baguma, the secretary general of Uganda National Teachers’ Union (Unatu), said closing the schools would be detrimental to learners, especially candidates who are sitting the national examinations. “It is a tricky situation. It is not ideal to close to close the schools where there are no serious cases. The ministries of Education and Health must work together to support schools to stick to SOPs. Closing schools will be detrimental to learners who lost two years to Covid-19-induced lockdown. The only thing to do is to tighten safety measures and enable learners to continue with their studies,” he said.  The chairperson of the Parliamentary Committee on Education and Sports, Mr John Twesigye, said health teams should work closely with school administrators to continuously monitor children in affected schools.    On why government did not close schools after confirming Ebola, the State Minister for Higher Education, Mr John Chrysostom Muyingo, during an interview yesterday said:

“Ebola is easier to manage than Covid-19 if people cooperate and from the lessons of the past experience of dealing with Covid-19, individuals are expected to be more cautious.” Covid-19, according to Dr Muyingo, was complicated [to handle in schools] because it was a new virus and people hardly knew what to do hence the closure of schools. “We are working together to tone down on the spread of Ebola and if they have not mentioned anything like shutting down schools, then, we find no need to. For now, we [schools] continue to enforce the standard operating procedures from the Health ministry,” Mr Muyingo said.