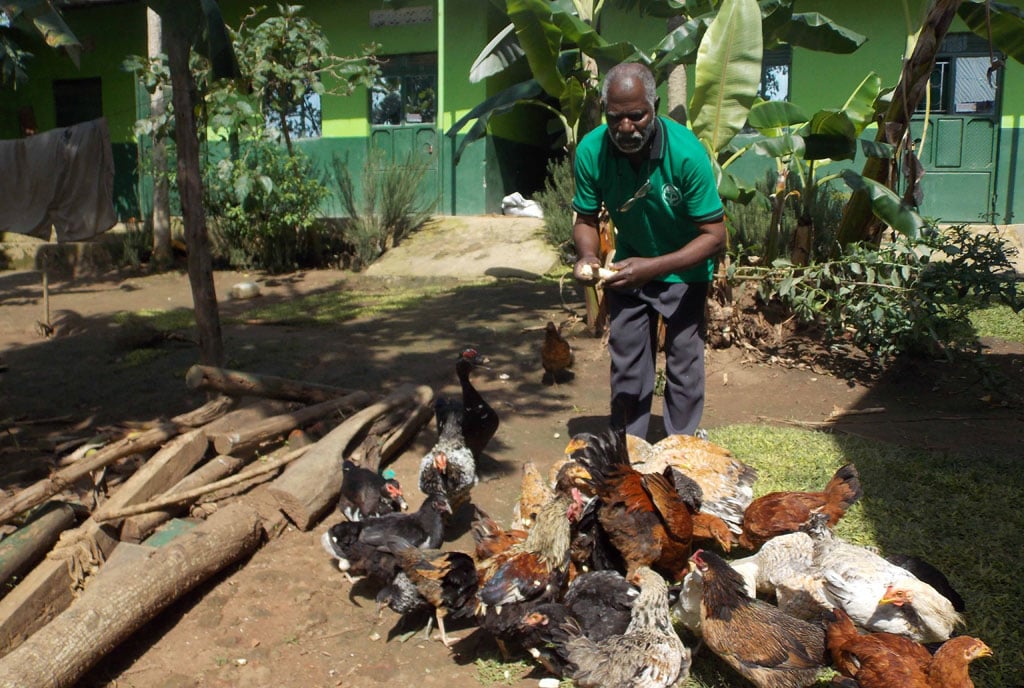 Hundreds of farmers are expected to attend today’s Seeds of Gold Farm Clinic at National Fisheries Resources Research Institute (NaFIRRI). During the clinic, farmers will get new skills on fish farming and poultry management. The article below guides on the management of indigenous chicken farming.

Commercial indigenous (local) chicken farmers for a long time have thought that keeping this type of chicken on free range is just enough. They therefore avoid taking care of them properly and still expect good earnings from them. This is not recommended. Generally chicken require good feeding, housing, protection against diseases and predators in order to give good return.

Indigenous chicken have over time proved to be more profitable both in their meat and eggs as compared to hybrid types and any farmer keen to make more money out of them should go an extra mile just from free range.

A good chicken house should protect the chickens from the cold and wind and keep away predators such as the mongoose, dogs, wild cats or snakes.

The house should be spacious enough to reduce congestion, which causes stress in chickens and even cannibalism and pecking. Ideally, each chicken requires at least two square feet of space. In this 100 percent more floor space is fine. If space allows, ensure that you leave an open area where the chickens can be released in the evenings (this is called a chicken run) where they can run, pick insects and eat vegetative matter such as grasses and plant vegetables such as kales. This should also take care of ventilation for natural breeze.

A chicken house should also be constructed facing East to West direction to reduce wind or draft that can affect chickens.

“Chickens should be provided with clean water at all times for food transport to all parts of the body and to maintain their health. Farmers can also add two or three tea-spoonfuls of Effective Microorganisms (EM1) and Aloe Vera solution in the water to improve digestion and provide immunity from diseases,” says Ochieng’ Ouko, poultry research assistant.

Indigenous chicken, just like any other breed should be vaccinated against the most common diseases such as fowl pox, Newcastle, Mareks and coccidiosis diseases.

Poultry farmers should keep an eye on their chicken for any sickness. They should ensure that all the chickens are vaccinated against the most common diseases such as fowl pox, Newcastle, Mareks and coccidiosis diseases.

Coccidiosis’ global impact is estimated at $300m causing poor performance, morbidity and mortality. Coccidiosis is a disease caused by a parasite that affects the gut wall of chickens. The parasite lives in the gut and is transferred to others chickens when it is released through feaces from an infected chicken in the form of a cyst.

The cycle of infection continues when it is then eaten by another chicken thus spreading the disease. Depending on the number of cysts eaten a chicken may not be affected especially if they are few. If too many are eaten the chicken will succumb to Coccidiosis.

Early signs of Coccidiosis include loss of appetite among the flock which eventually stop eating. They then become hunched over with ruffled feathers. The damage to the gut wall reduces the ability of the gut to absorb nutrients resulting in weight loss and diarrhea with bloody chicken droppings.

The best way to prevent the disease is by poultry farmers ensuring that chickens are exposed to very low levels of the disease (oocysts) as well as building their immunity. Chicken pens should be cleaned well and extremely thoroughly between flocks. If a pen is not cleaned properly after the flock leaves the pen then the next flock is exposed to high levels of Coccidiosis.

Poultry farmers with infected birds can treat them using an anti-coccidial medication that prevents the spread of the disease. If the disease is already in the gut then farmers should treat their birds using strong antibiotic therapy. Ensure that the flock has access to multivitamins and probiotics.

In order for one to guard their flock against any outbreaks that in most cases result in immense losses, experts advise farmers to embrace high standards of hygiene by keeping the poultry pen clean and dry. In addition, disinfect the pen regularly; ensure good ventilation in and around the pen. A vaccine is available commercially, however, its administration can be complex and needs the correct environment to work, realistically this is not currently practical for backyard chicken holdings.

Coccidiosis is a disease caused by a parasite that affects the gut wall of chickens. The parasite lives in the gut and is transferred to others chickens when it is released through feaces from an infected chicken in the form of a cyst.