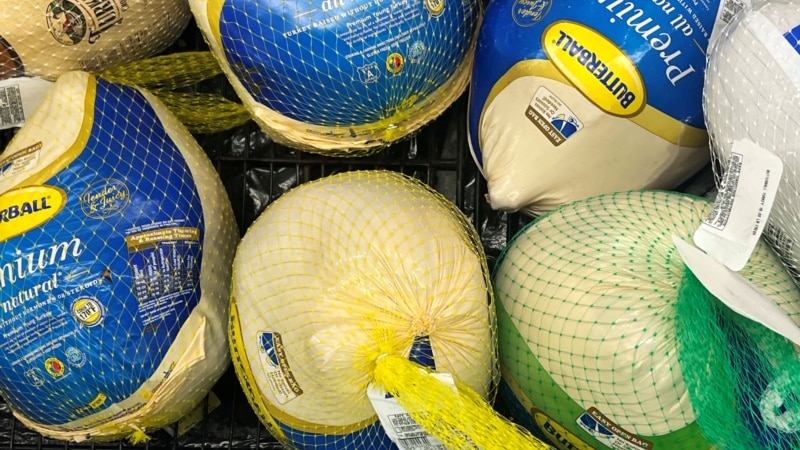 Washington —
Skyrocketing food prices due to soaring inflation are taking a bite out of this year’s feast on Thanksgiving, a national holiday in the United States on November 24. People traditionally share a big meal and give thanks for their blessings.
Thanksgiving dinner often includes turkey and trimmings, such as cranberries, sweet potatoes and pumpkin pie.
A survey by the American Farm Bureau Federation indicates Thanksgiving dinner costs are up 20% from last year. And the cost of a turkey alone is up 21%.

A woman and her son at Food for Others in Fairfax, Virginia, Nov. 16, 2022. The center, just outside Washington, is providing Thanksgiving provisions and a gift card to buy turkey or additional food items.

Some people say they plan to pare down their big holiday feast.
“I will not have as much food this year. I used to have too much food anyway,” said Cynthia Walsh, who lives in Alexandria, Virginia, outside Washington. “What is more important is that my family is together to appreciate what we have.”
For those in need, food banks across the country are lending a hand. But with donations down, and a huge influx of clients, they are feeling the pinch.
Millions of people are reaching to the food banks for help.
Among them is Marguerita Vicencio, who came to the U.S. from Chile six years ago.
“My husband just lost his job, and this is the first time I’ve come to a food bank for help,” she said as she picked up supplies at Food for Others in Fairfax, Virginia, a Washington suburb.
Her 11-year-old son, Tomas Arancibia, said his family combines their Chilean roots with American Thanksgiving traditions.
“We’re going to celebrate with a turkey and the food we get here with my brothers and sisters and friends of our family,” he said.
Annie Turner, executive director of Food for Others, told VOA that high food prices are making it challenging for the nonprofit to support the clients.

Leo Delgado, warehouse manager at Food for Others in Fairfax, Virginia helps with packing food boxes for Thanksgiving, Nov. 16, 2022.

“We’ve not only seen an increase in our food costs, but our donors are giving less money, so we have to buy more food ourselves,” she said. “Meanwhile, the number of families that are coming here has increased 60% over this time last year.”
“We get many families who come to get food for Thanksgiving, and we hand out stuffing, potatoes and other fresh produce,” she added. “Instead of providing a turkey, we give them a gift card to buy food, so they can get a turkey or other food they would prefer.”
In the Midwest, food service organizations in cities like Chicago and St. Louis are also getting inundated with clients.
“The number of people turning to our food programs is up 42% compared to last year,” said Greg Trotter, director of marketing and communications at Nourishing Hope, a social services group in Chicago. “Our donations have not been enough to keep pace with the increase in the number of people we serve, which includes a lot more families with children.”
“Even though we had to pay twice as much as we did for turkeys this year, we try to provide turkeys and other holiday food to anyone who comes in the door,” he said.
At the St. Louis Area Foodbank in Missouri, the organization is holding their “Thanksgiving Together” for the fifth year.

The Food on the Move program by the St. Louis Area Foodbank, Feb. 28, 2022. The program brings supplies to people in different locations in the area, which includes churches and high schools.

“We are distributing Thanksgiving meals to over 4,000 families, the highest we’ve ever planned for,” Meredith Knopp, the president and CEO of the foodbank, told VOA. “Since this area has such a diverse population, which includes people from Afghanistan and large Bosnian and Asian populations, we are also providing foods that they are more accustomed to since not everybody celebrates Thanksgiving.”
In Los Angeles, the second-largest city in the U.S., the Los Angeles Regional Foodbank through its partner agencies reach 800,000 people every month.
Michael Flood, the CEO of the food bank, said a major problem is “we’re having supply issues getting enough turkeys for Thanksgiving.
“Besides turkeys, we’re bringing in truckloads of chickens for people during the holiday,” he said.
At St. Mary’s Food Bank in Phoenix, Arizona, the number of people who come in continues to skyrocket, said Jerry Brown, the director of public relations.

These turkeys from St. Mary’s Food Bank in Phoenix, Arizona are being distributed in a rural area in northern Arizona, Nov. 16, 2022

“We’ve had twice as many people than this time last year — 7,000 of them came to our two main locations in one week, which we’ve never had happen before,” Brown said. However, “donors are cutting back, so we’re spending more money on food and we’re giving out more food than we ever have before.”
Despite the obstacles, Brown said the food bank is determined to give families a good Thanksgiving.
“We’re anticipating we will be able to send 12,000 people home with food boxes before Thanksgiving,” Brown said. “We have prided ourselves at St. Mary’s for decades that the last car leaving us before Thanksgiving will have a turkey in the back seat.”