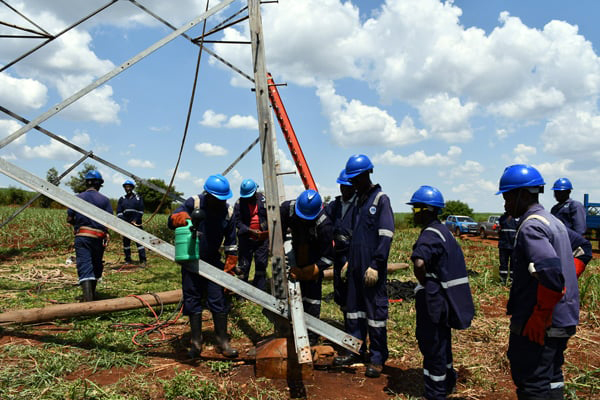 The government needs more than  Shs1b to replace five electricity transmission towers in Mukono District that were vandalised a week ago, the State Minister for Energy, Mr Sindronius Okaasai, has said.

Mr Okaasi said each transmission tower costs Shs200m. The minister warned of likely extended power blackouts in metropolitan Kampala and the western region after 104MW were taken off the grid by the vandalism.

The tampering led to the collapse of five transmission towers, officials said.

Mr Okaasai said the government has been forced to power on the 50MW Namanve thermal plant to plug some of the electricity supply shortfall.

“We had to resort to the 50MW Namanve thermal power plant as an emergency standby to provide electricity. Uganda Electricity Transmission Company Limited is constructing temporary structures to restore the faulted transmission lines, this is estimated to be completed by November 18,” he added.

Mr Geofrey Okoboi, the acting executive director for Electricity Regulatory Authority (ERA), asked the government to ensure that the punitive measures in the Electricity (Amendment) Act 2022 are implemented to stem rising vandalism.

“Electricity consumers are the most affected by the vandalism because they incur the costs in the end. Therefore, the stringent penalties for vandalism-related offences as laid in the Electricity (Amendment) Act 2022 should be implemented to save the consumers,” he said.

Under the revised law, any person convicted of vandalising, or being in possession of vandalised electricity materials is liable to Shs1b fine or a 12-year jail sentence, or both.

A repeat offender faces 15 years’ imprisonment or Shs2b penalty, or both.

Mr Martin Erone, the UETCL head of corporate communications, said Owen Falls-Mukono North-Mulago Transmission Line was restored on Monday and it is able to supply electricity to industrial areas in Mukono and Namanve.

“We shall need at least five days to replace Owen Falls-Lugogo Transmission Line which was badly hit, with four towers vandalised,” he added.

Mr Erone said they would bolster collaboration with security agencies to investigate, arrest, and prosecute vandals.

The government has established a multi-sectoral ad hoc security coordination committee comprising Energy ministry and its agencies, their Defence counterparts and officials from police and intelligence agencies to secure power lines and tackle vandals. In order to suffocate market for stolen electricity material, the Trade ministry has been tasked to make regulations for the scrap industry after investigations found the materials end up in the hands of scrap dealers.