From Fort Portal to Namugongo

From Fort Portal to Namugongo 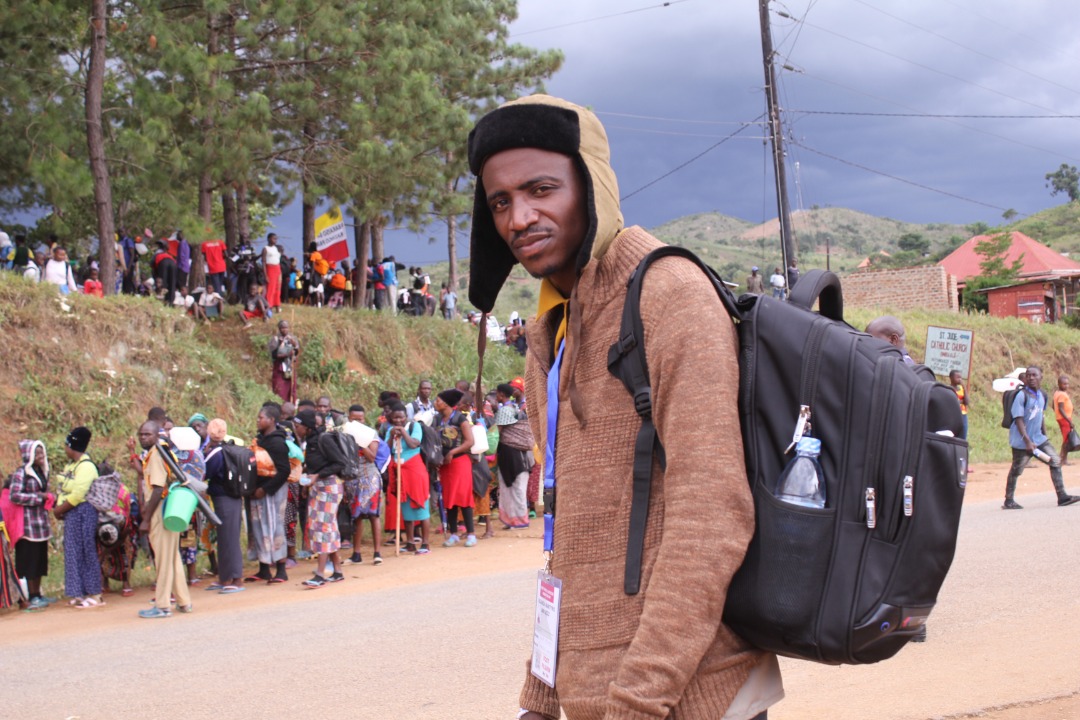 One had to prepare early enough spiritually and physically to trek 303 kilometres in nine days. The journey was from Virika Cathedral in Fort Portal City to Namugongo Catholic Shrine in Wakiso District to celebrate Martyrs’ Day on June 3.

My plan to make a pilgrimage started early this year after the Archdiocese of Mbarara was selected to host this year’s celebration. Fort Portal Diocese had been chosen to lead the Holy Mass.

In the Catholic faith not everyone can make a pilgrimage before saying the Novena, a nine-day supplication, before setting off. I had to look for my peers who wanted to be part of the pilgrimage and tick off the Novena.

Being my maiden pilgrimage, I did not know how to go about the journey on the same road I always drive a car.

I made up my mind to trek after spending close to two weeks praying to God to use me and grant me the energy and strength accomplish my mission. As the diocese was busy with their final preparations, my peers and I started our Novena at 3pm on May 13 from St Charles Lwanga Church. During the Novena, our leaders briefed us on how to prepare.

Before setting off on May 23, I had to buy one pair of the walking shoes (crocs), a hat to protect my head, two sports trousers and body wrap (leesu) to cover myself for warmth. One travels light because at stopovers, you wash one cloth and wear another.

On the morning of May 23, I packed three pairs of trousers (two for the walk and another for the celebrations at Namugongo), one pair of shoes, four pairs of stockings, four shirts, and toiletries.

For easy identification, everyone was given a tag bearing a name and parish. This helped me to identify an 80-year-old woman, Rose Zahura who kept encouraging us. Zahura was our chief walker.

At 5pm, the Fort Portal Diocese bishop, Robert K Muhiirwa flagged off the pilgrims at Virika Cathedral after Mass. We set off as the UPDF brass band and other Christian devotees escorted us out of Fort Portal City to Kitumba, about three kilometres away.

At Kitumba, the pilgrims had to stop for Bishop Muhiirwa to pray for the final blessings amid cheers from Christians and onlookers at around 6pm.

Our first stopover was in Kaihura, Kyenjojo District after a 41-kilometre trek. This felt doable because I was fresh and energetic but we had to rest after every 10 kilometres.

The first 10 kilometres felt like a walk in the park because of fresh energy, and for the remaining distance, we had to slow down because it was getting dark. We had to walk through part of Kibaale National Park that took us about an hour.

To keep awake, we had to chant praise songs about the Uganda martyrs as well as reciting the rosary in pairs.

We got to Kagorogoro at around midnight in the company of police patrol that was escorting us for security. By that time, most pilgrims had started complaining of pain in the legs and feet, and as such, we were forced to rest for about an hour. At this point, my legs got numb. I felt my joints aching too.

We had carried pieces of tarpaulin for sleeping on. We would use jackets as bedsheets or for covering ourselves. However, at the first three resting points, I refused to sleep fearing that I would oversleep and be left behind.

At our first stopover point at Kaihura, I arrived at 4am yet several of my fellow pilgrims had arrived four hours earlier. Before sleeping, I freshened up and bought myself a cup of porridge because it was getting cold yet we had to sleep under a tree.

From every stopover, the journey would resume at 4pm with Mass and end between midnight and 4am depending on one’s pace.

Walking in the night was the most challenging because darkness seemed to stimulate sleep and whenever I felt tired I would rest for 20 minutes by the roadside as I waited for others.

Since we were more than 2, 000, finding a resting place before the stopover was challenging because it would have required a playground which was not easy to find by the roadside. At times we would rest in groups of 100 to 400 while others continued walking. While resting, we would sleep in open space, in a nearby church or school compound.

Whenever we made a stopover, pilgrims would jostle for water for bathing and washing clothes before resting.

Every pilgrim was required to carry a jerrycan, a plate and a cup. At some stopover points, some pilgrims who wanted to join the trek next day would prepare lunch for us and ensure our comfort.

My first time to eat food prepared by fellow pilgrims was in Rwibale in Kyenjojo District. I bought a plate at Shs 2,000 because we had previously walked more than 40 kilometres and I was too exhausted to look for food vendors nearby.

However, our diet comprised matooke, posho with beans and maize porridge. Those who could afford bought food from vendors. At the start of every journey, I first had to buy a bottle of water for rehydration but, at some point, our leaders offered us water. Some of my peers packed food they were served at stopovers and ate it while walking.

At Rwibale in Butunduzi Town Council, Kyenjojo District, the number of pilgrims with body aches overwhelmed the Red Cross medical personnel. They were however, boosted by reinforcement sent from Mubende and Mityana.

From Fort Portal, we had an ambulance to evacuate pilgrims who failed to walk part of the distance. Those evacuated would be dropped off at our next stopover. Medical personnel would massage those with foot and muscle aches and attend to those who needed any other treatment.

“I have been walking to Namugongo for more than 10 years. We have never been escorted by police or ambulances. I am surprised that many people were complaining of body ache. I believe they never prepared themselves well by reciting the Novena,” Teddy Kemigabo, a pilgrim from Kagote said.

When we reached Mityana District after walking more than 200 kilometres in seven days, I started feeling pain in my right foot. I had to abandon my walking shoes for sandals and also slow my pace for the next two days up to Busega.

From Rwibaale in Kyenjojo up Kakabara in Kyegegwa District we goat drenched in rain. However, pilgrims enjoyed walking in rain because they believed it was a blessing from God.

If you asked any pilgrim who walked to Namugongo, they would confess that the most challenging distance was; from Matiri Forest Reserve in Kyenjojo District, then Mityana to Nswanjere in Mpigi District because of  many hills.

“When you reach Nswanjere you know that you have completed the journey to Namugongo. That section of the road has many hills and most pilgrims say they slowed down and kept in conversation to surmount the hills,” John Katwesige, a pilgrim from Katoosa in Kyenjojo District said.

By May 31, at around 4am we had arrived at Mount Carmel Catholic Church in Busega to prepare for the grand entry. We had remained with only 25 kilometres to Namugongo.

I had to take a nap up to 10am and use the rest of the time to do final exercise to prepare for the final journey.

Nine days had elapsed and we were left with hours to Namugongo. Short as it seemed, it took us six hours to reach the shrine. The only resting points we had involved standing in the middle of the road to take some water as motorists gridlocked up to Namugongo.

The police brass band led us as we trekked in the heat from Northern Bypass and later Bishop Muhiirwa and other leaders from Fort Portal joined in. The journey that usually takes five hours by bus from Fort Portal to Kampala took us nine days. On May 31, at exactly 6pm, we entered the gate of Namugongo Catholic shrine.