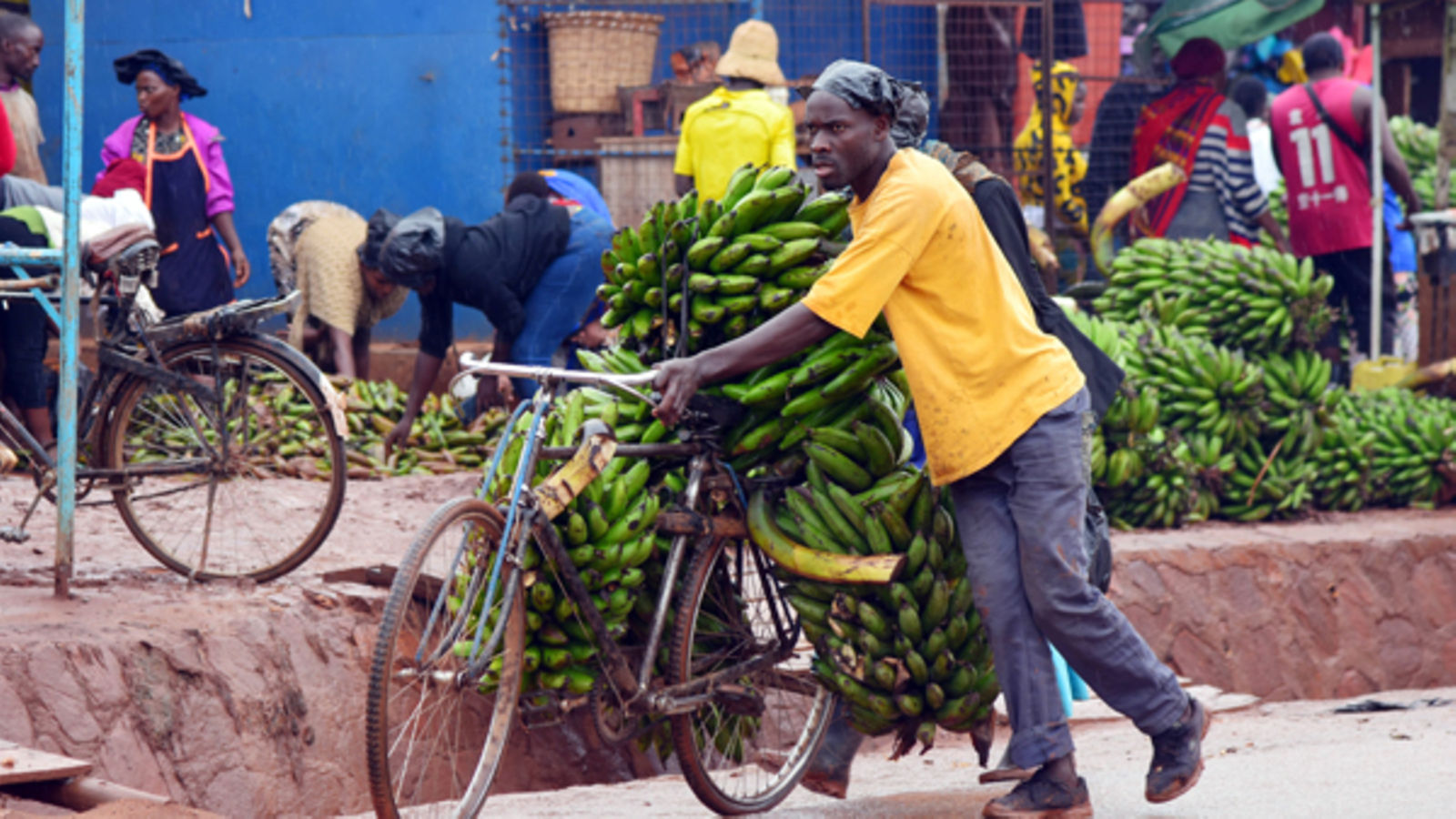 The cost of matooke has more than doubled over the last six weeks, with an average-sized bunch of the banana food going for between Shs35,000 and Shs40,000, and the bigger bunches going for as much as Shs80,000.

The increment in prices for the banana food crop has been fuelled by a sharp rise in demand, thanks to shortages precipitated by decline in production of matooke in parts of the central region.

Shortages in the supply of other food items such as maize flour, cassava and the different potato varieties that constitute major parts of the local menu, haven’t helped matters.

A survey carried out in markets in the Greater Kampala Metropolitan Area and other cities and urban centres revealed that most consumers have resorted to purchase of fingers of matooke as opposed to purchase of clusters and bunches.

That, however, does not mean the fingers come on the cheap.

Ms Noreen Nakimera, a resident of Bweyogerere in Wakiso District, told Sunday Monitor that Shs1,000 will get a consumer between five and six fingers of matooke.

“We do not understand what is happening. It is unbelievable that one can only get five or six fingers of matooke for Shs1,000, but there are days when you will be given only four fingers. It is tough given that matooke is the only food that some of us enjoy,” Mr Nakimera said.

Mr Stephen Ndyabagye, who deals in matooke in Jinja Central Market, attributed the increment in the cost of the price of matooke to a spike in the farm price.

“The price of matooke in western Uganda where most of it comes from has been on the rise over the last couple of months. The lowest prices range from Shs20,000 to Shs30,000, depending on the size,” Mr Ndyabagye said, adding, “If you factor in the cost of transport, then you have what you see on the market today.”

Dr Priver Namanya Bwesigye, a senior researcher and plant biotechnologist at Researchers at the National Agricultural Research Laboratories (NARL) in Kawanda, attributed the increment in the cost of matooke to developments on the economic landscape.

The latest prices on the market outshoot figures captured in the Uganda National Bureau of Statistics’ October Consumer Price Index (CPI). The statistics body reported an increase in food crops and related items inflation of 3.3 percentage points, rising from 30.3 percent in September to 33.8 percent in October.

Inflation for a bunch of matooke was reported to have increased by 15.6 percentage points, soaring to 75.4 percent in October 2022 up from 59.8 percent in September.

Mr Ndyabagye pointed out that the increment in the cost of matooke at the farm has been precipitated by demand driven by shortages of other locally grown food crops like rice, cassava, potatoes, maize and beans, which usually complement matooke on food tables.

The delays in the arrival of those items on the markets has been blamed on the delayed rains and prolonged droughts in some parts of the country.

“The rains have started, but they came late … in Busoga, maize is still young, potatoes and cassava are not yet available. Most parts of Uganda do not have any food at all. That exerts a lot of pressure on the few farms and crops available,” Mr Ndyabagye reasons.

Matters have not been helped by the fact that local production of rice has never been able to meet demand.

A report of the probe conducted by the parliamentary Committee on Tourism, Trade and Industry into alleged unfair trade practices in the rice sector, which was released in August, puts rice production in Uganda at 220,000 metric tonnes per year against a total consumption of 450,000 metric tonnes.

“This, therefore, leaves a deficit of 230,000 metric tonnes that need to be covered by importation of rice from other countries,” the report reads in part.

Figures from the Rice Millers Council of Uganda indicate that in the last financial year, Uganda imported 423,226 metric tonnes, with the vast bulk (408,636 metric tonnes) coming from Tanzania. That still left a deficit of 27,000 metric tonnes.

Local production could, however, not be boosted to meet demand as many actors in the local rice production chain had earlier been forced to quit the rice business in 2020. Most of the actors quit after the then Trade minister, Ms Amelia Kyambadde—on July 15, 2020— issued an import permit to Ms Gotovate Uganda Limited. The permit allowed it to import tax-free 50,000 metric tonnes of rice from Tanzania.

Mr Phillip Idro, the chairperson of Rice Millers Council of Uganda, in a previous interview, told this newspaper that many rice farmers in places such as Nwoya and Bulambuli had—as a result of the flooding of the market by cheap rice from Tanzania—switched to cultivation of fruits and vegetables.

Ms Rachel Mbabazi of the Rice Association of Uganda, in another previous interview, said the impact of the July 2020 decision was such that it forced farmers “to store their paddy hoping for better prices in the future.”

She added: “This has also led to a reduction in business for local millers. The entire rice industry and the livelihoods of nearly three million people who depend on small-holder production is in distress because of this decision.”

The 2018 Annual Agricultural Survey carried out by Uganda Bureau of Statistics (Ubos) and released in May 2020 indicates that matooke was by 2018 grown in 47 percent of agricultural households in western Uganda, central region and parts of eastern Uganda.

The survey report indicates that the total production for the crop that was grown on about 579,000 hectares of land in 2018, was 6.5 million metric tonnes.

It was not possible to obtain the latest production figures.

Mr Godfrey Nabongo, the head of the department of local government statistics at Ubos, told Sunday Monitor that the statistics body has not yet conducted any other agricultural survey since the one that was done in 2018.

While the unprecedented demand-driven price increments suggest a shortage of production, Dr Bwesigye said there are no figures to back talk of shortages in production. She, however, acknowledged that some parts of the country are not producing as much as they used to.

“In the ‘1970s and the ‘1980s, the central region and the Lake Victoria basin used to be predominantly banana growing, but the amount of bananas that used to be produced in those areas is now much lower,” Dr Bwesigye said.

She attributed the decline in production in low altitude places to higher incidences of pests and diseases, which is not the same with plantations in higher altitude areas like parts of western Uganda and the Rwenzori, as well as Elgon mountains areas.

“The number of pests is higher in places that are low altitude, so disease pressure is a lot higher,” she revealed, adding, “You have a lot more disease pressure in Kayunga, Mukono, Masaka, Rakai, the cattle corridor, Jinja along the Lake Victoria basin. That means plantations are over time heavily affected. Their lifespan becomes shorter. In four to five years, the plantation is completely wiped out.”

Which goods have risen most in price?

Datapoints from the Uganda Bureau of Statistics’s October Consumer Price Index (CPI) underlined the fact that households continue to come under pressure from spikes in food prices.

Ubos said the consumer prices index rose to 10.7 percent on the back of soaring prices for food.

Food was the biggest driver behind the jump, with an annual rise of just under 24 percent. A breakdown indicates that the average price of everyday items has shot up over the past year.