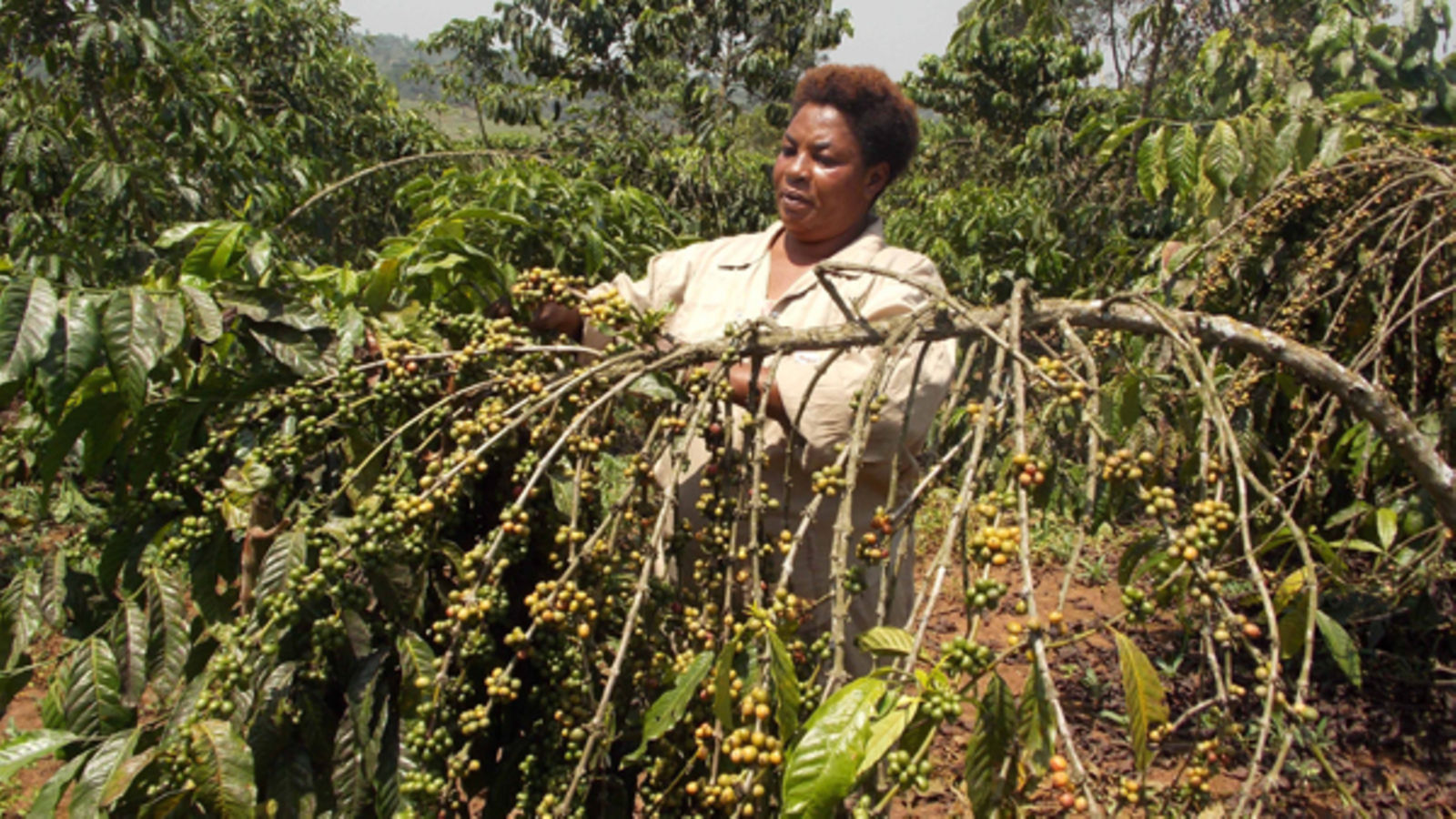 In that building Sowedi Sserwadda, chairman of the cooperative society occupies an office and supervises more than 60 employees in the different other offices on the block working as accountants, managers, clerks, technicians, quality controllers, coffee tasters, laboratory assistants and field assistants among others.

“Both of them are ours,” says Sserwadda. “To be a member of Kibinge Coffee Farmers Cooperative Society one must also be a member of the Sacco. A members’ Sacco account number is also the coffee farmers’ cooperative society number. We deposit all farmers money earned from their coffee on their Sacco accounts. We are a member-owned organisation that buys coffee from the member farmers at a slightly higher price than what is offered locally, then export it, and finally share the profits among the member farmers by depositing the money on their individual accounts in the Sacco.”

The Sacco also helps develop the saving culture among farmers. The farmers who want to expand their plantations can be given coffee seedlings on credit and pay later after selling their coffee.

They can always borrow from their Sacco to fix such issues as tuition fees for their children, buying land, or purchasing building materials for home improvement, and other needs. They cannot therefore be tempted to sell their coffee when it is still in the garden even if they have pressing financial issues.

According to Sserwadda, Kibinge Coffee Farmers Cooperative Society, which now has a membership of more than 2400 in the districts of Bukomansimbi, Kalungu, Lwengo and Sembabule, began as a simple idea in 1995, when three farmers, Joseph Kamulegeya, Livingstone Mpimbe, and Mustafa Sserubugo chose to jointly market their coffee harvests.

They discovered that they had much bigger coffee volumes to sell which attracted better prices and more farmers joined them.

It was also around that time that farmers were encouraged to turn to planting cloned Robusta coffee to come up with the preferred Screen 18 bean size.  By 2008 they were a big group of farmers with their administrative office at the home of the biggest farmer among them, Kamulegeya.

“It was around that time when we reached out to them and introduced the idea of forming an association,” Joseph Nkandu, executive director of NUCAFE (National Union of Coffee Agri-business and Farm Enterprises) told Seeds of Gold.

NUCAFE also assisted them to get UTZ certification (UTZ is a Guatemalan language abbreviation which means Good Inside). This meant they had to emphasise good quality coffee production in order to attract higher prices for their product. In 2009 they got registration as Kibinge Coffee Farmers Co-operative Society together with its sister organisation, Kibinge Coffee Farmers Sacco.

In 2011 Kibinge Coffee Farmers Cooperative Society became Fair Trade certified. “This means that we had to observe all fair trade obligations such as not using child labour on our farms, correct and honest weight measurements, prompt payment of wages among other good practices,” Sserwadda explains. “And Fair Trade certification comes with lots of benefits including some money given out as corporate social responsibility to the producing communities by large coffee trading companies. In fact this double storied office building where we are seated is the result of such donations. We also use that money to construct school buildings where there is need.”

In 2012 they were registered as coffee exporters. The operations manager, Ashraf Ssekyayi Lusiba, disclosed that since 2012, when they obtained their export license, they have been exporting coffee to the Netherlands, Belgium, and Japan. They export between 400 and 600 metric tonnes of Robusta coffee annually. Recently they got orders from the UK and they have also began selling powder coffee to a restaurant in Istanbul, Turkey.

Quality controller, Faridah Namubiru, who is in charge of coffee grading, roasting and packaging, went on to reveal that the cooperative society has a lot of hope that hundreds of other restaurants in Turkey will find Ugandan coffee irresistible, and also make their orders.

Currently, the cooperative society has a truck for transporting packaged roasted coffee beans and powder coffee packets and tins to thousands of shops and supermarkets all over the country.

“Regularly our overseas buyers make trips to our offices not only to familiarise themselves with what we are doing but also to ensure that we follow the internationally recommended production procedures especially for those that want organically grown coffee,” explains Namubiru.

“The coffee we produce and export is entirely our own product, prepared to meet the requirements and demands of our customers in Uganda and abroad,” says production manager, Holix Yiga Muwonge.

“Their preferred coffee bean size is Screen 18 and we strive to give them exactly that. It is the reason that we have got our own nursery gardens of Robusta coffee varieties bred to yield the large coffee bean size (Screen 18). That is also why our extension officers go all over inspecting farmers and teaching them about good coffee production practices, postharvest and storage practices,” he says.

He expressed surprise that the now condemned Uganda Vinci Coffee Company (UVCC) agreement was committing farmers to channel their Screen 18 coffee beans through a single foreign investor instead of the farmers marketing it themselves when it took them so much trouble to produce the commodity.

Sserwadda also expressed similar sentiments about UVCC saying that they have come to be where they are through honest hard work, paying for electricity and fulfilling all tax obligations without the generous favours and exemptions that the government had given to the foreign investor. “I think we deserve government support too,” he says.

Namubiru told Seeds of Gold that she and some members of her team have received training sponsored by UCDA in coffee testing, grading, and roasting. “We ensure that the coffee produced by our farmers has no strange smell and foreign objects. It must also be within the recommended moisture range. If the coffee brought to us by a farmer does not meet those standards it is rejected,” she says.

She is responsible for roasting and grinding coffee which is ground, and packed in sizes of 250g, 100g, 50g and 10g, and labelled before being loaded on trucks and taken to shops and restaurants across Uganda.

They also prepare crunchy roasted coffee beans in 25g packs for chewing. They roast and grade coffee for export too.

Namubiru, however, said they have challenges. “We have no control over the weather and the climate and when it rains for too long our farmers have difficulties with drying the crop to the required moisture standards. And when it does not rain for a very long period the production and quality of the crop deteriorates. We also sometimes do not have access to affordable credit. We are looking forward to the time when all our farmers will be in a position to carry out irrigation during dry periods,” she says. She went on to mention incurable coffee diseases such as the coffee wilt disease (CWD) and pests such as the coffee twig borer which are stifling production as another challenge. Low local coffee consumption levels are an additional big problem. “Our farmers have a misguided conviction that coffee consumption leads to high blood pressure, yet there is no scientific or medical proof for it. You will notice that in most homesteads people only drink tea,” Namubiru notes.

Ruth Ssemanda, a coffee farmer at Kiyoka A Village, in Kibinge Sub-county, is proud to be a member of Kibinge Coffee Farmers Cooperative Society. “Every year we get dividends which boost our shares and savings at Kibinge Coffee Farmers Micro-finance. They also give us support by supplying us with inputs such as cow dung as fertiliser and tarpaulins on which to dry the coffee and we pay later after selling the coffee.”

Faridah Namubiru told Seeds of Gold that she and some members of her team have received training sponsored by UCDA in coffee testing, grading, and roasting. “We ensure that the coffee produced by our farmers has no strange smell and foreign objects. It must also be within the recommended moisture range. If the coffee brought to us by a farmer does not meet those standards it is rejected,” she says.

Before being taken to the market, the dried coffee beans are processed as follows: Hulling: Hulling parchment coffee involves removing the dried husk; exocarp, mesocarp and endocarp. Polishing: Coffee polishing is an optional step that is skipped by some millers. It involves getting rid of any sliver skin that may have found its way through hulling. Polished beans are considered to be of a higher quality than unpolished ones.