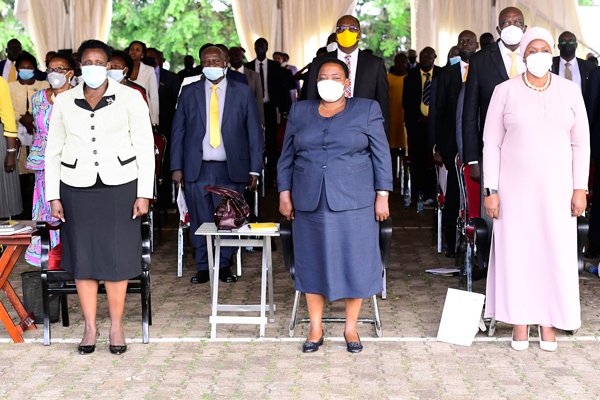 He spotlighted the problem of soaring commodity prices, which is eating away the purchasing power of households, but he offered no immediate relief.

Like in the past, he said no to tax cuts and subsidies, both of which he argued would haemorrhage expected government revenues, stalling planned infrastructure developments, including paving roads.

So, where does the country go from here? Produce more of agro-commodities in global short supply so that Ugandan can cash in on the food crisis.

He disclosed his involvement in diplomatic efforts to broker talks and an end to the Ukrainian war that has choked global supply chains.

Mr Museveni did not address the likely impact of the upcoming August elections in Kenya, Uganda’s biggest import-export route, and what the country was doing to buffer itself in the event of a problematic end as it happened in 2007.

Despite an apparent thawing of relations with Rwanda, marked by reopening of the border after a two-year closure, and his counterpart Paul Kagame’s visit, the President offered no new insights into whether all is now settled between the neighbours.

He also avoided the touchy subject of First Son Muhoozi Kainerugaba, an active-duty military general and commander of the Uganda People’s Defence Forces (UPDF) Land Forces, who has through tweets and at spreading birthday parties made utterances about Uganda’s politics and international relations — things that in past landed other officers, among them Lt Gen Henry Tumukunde, in jail.

Lt Gen Muhoozi has also referenced “taking power”, without specifying how, a reopening of the taboo subject of succession discussion.

President Museveni said nothing to answer the longings by supporters and detractors about the meaning of Muhoozi’s manoeuvres, which has included tweets to side with Tigrayan rebels fighting the Ethiopian government or promising Uganda would fight anyone against Rwanda’s Kagame, who he repeatedly fondly calls “my uncle”.

He revisited the divisive proclamation to pay scientists more than humanities counterparts, restating that science and innovation is at the centre of society’s and human progress.

On security, his pet subject, Mr Museveni, a former guerrilla leader and retired army general, spoke about the benefits of regional cooperation in diminishing the threat and menace of the Allied Democratic Forces (ADF) that the UPDF and Congolese army have been pursuing jointly in North Kivu province in Dr Congo since November last year.

At home, the continuing insecurity plaguing Karamoja caught his attention and, like in the past, the commander-in-chief promised that his government was working to ensure that cattle rustlers in the region “lose appetite for the gun”.

On corruptionPresident Museveni touched on the subject of official graft, which is undermining government service provision as unearthed by the State Minister for Economic Monitoring Peter Ogwang, but he offered no new solution.