How Amin spared teacher in Soroti

How Amin spared teacher in Soroti 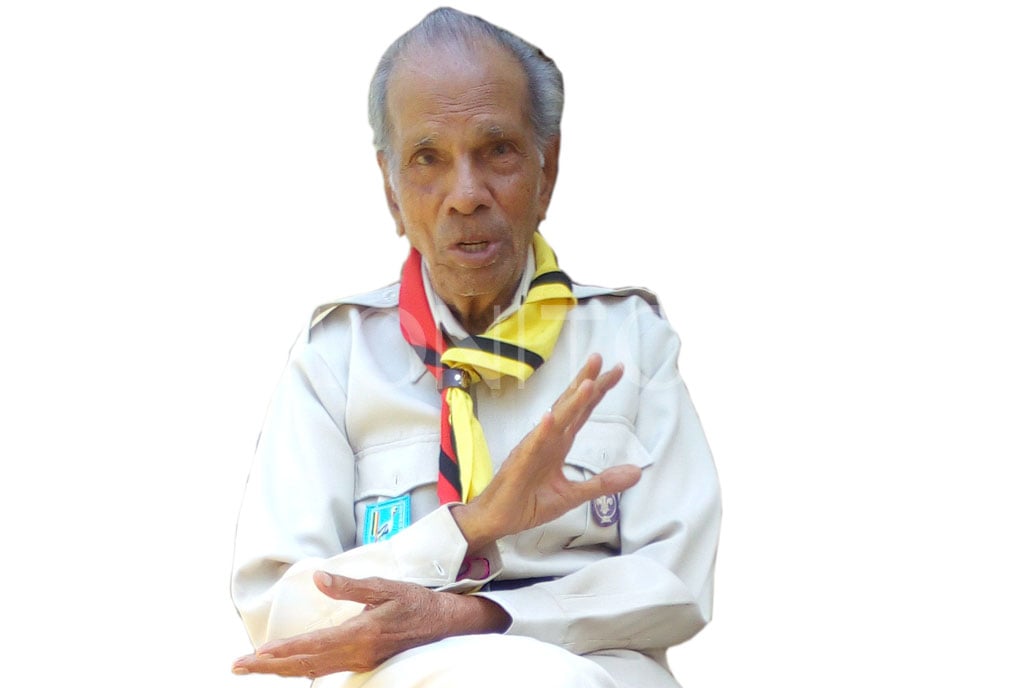 Bhatt Saraswati Chandra Ambalal is 94 years-old. He may not be agile and have the exuberance of his youthful days but he is possessed with intellect, probity and a razor-sharp memory, and his face in repose is reflective of the past built from the clay of his youthful days. Smartly dressed in his boy-scout uniform peppered with a tie, he sat on a chair soaking in the questions at his house on the margins of Soroti Town.

Bhatt’s long winding journey across the rough seas to Uganda started in June 1956, at the age of 28, when the imperial British government recruited him to come and teach in Soroti, north-eastern Uganda. This is his personal account of events during the expulsion and how he summoned the courage to stay in Soroti as his wife and children returned to India.

As a young graduate with a diploma in education, fairly curious and eager to explore the world, I harboured an ambition of making exploits in my profession as a teacher.

So with the call by the British government, I departed India aboard the Bombay state-owned ship for Mombasa, Kenya. My final destination and home to be, was Soroti.

Seven days later, on June 7, the ship docked at Mombasa port, the major link between India and mainland East Africa.

It is from here that in the later days, I would embark on another journey that would shape my future, by train I managed to reach Soroti on May 15, 1957. Sir Andrew Cohen was the Governor of Uganda.

I settled in Swaria Primary School in Soroti Town as the head-teacher.

Five years later, I lived to witness a transition from the colonial government to Ugandans taking over power on October 9, 1962, with Milton Obote as the first prime minister.

On that day, it was all merry. People gathered in their hundreds at Soroti independence square, they drank and performed the traditional folk songs until the next dawn.

It was all rosy under Milton Obote I. As prime minister, he championed unity.  I saw a sense of belonging among all Ugandans, until later on when things seemed to fall apart— that is during the Buganda Crisis of 1966 that saw the abolition of kingdoms.

As the crisis alienated Obote from the Baganda, Amin exploited the situation by overthrowing Obote on January 25, 1971 while he was away in Singapore.

The merrymaking among some Ugandans who wished for political change was not long-lived as they aspired it to be. The most infuriating was Amin’s announcement in  August 1972, for all Asians to leave the country within 90 days.

To Amin, the Asians had obliterated the economy to the disadvantage of the black people, which literally wasn’t true, but as a man who ruled by decree, his words were final. Asians of Indian origin and those of Pakistani origin without Ugandan citizenship had to leave.

It was terrifying, it was dehumanising; leaving all property that you worked hard to get and leaving with less than $5. People of Asian origin…a majority who looked at Uganda as their home, [wailed].

At the conference centre in Kampala, where all Asian professionals in the field of engineering, medicine, and teachers were summoned, Amin through his emissary lifted the expulsion for experts of Asian origin in civil service, which meant, I as a teacher had the leverage to stay.

Idi Amin poses in a photo with Asians who stayed in Uganda after 1972.PHOTO/FILE

This wasn’t convincing enough for my wife, she opted to go back to India with our children, as I carried on with the teaching profession at Swaria Primary School here in Soroti District, where over time I have had the opportunity to be christened names such as Mr Opio, and Mr Okello.

After the 90 day grace period elapsed, it was all gloom in Soroti, a town of basically two streets then. All the shops were closed, and what followed was a state of desolation. Soroti turned into a ghost town with barely any outlet to buy the very simplest of commodities.

I watched in tears as Asians rolled the very smallest of their belongings in suitcases, they crowded the railway station in Amukaru in Arapai as they sought refugee in Kenya, where some with imperial British passports and citizenship had the chance to be repatriated to the United Kingdom. Others got asylum in Canada, USA, German, and Australia.

As the days passed, the impact was worse for the black natives. There was no place to buy sugar, salt became scarce, among other items. This gave birth to smugglers in the country at that time popularly known as Magedo, which was decisively dealt with by the regime of the day.

Life became hard, people had to do without basics in life. Bata was the only outlet selling shoes. To buy a shoe, one had to be vetted, and so the people had to queue for the limited supply of shoes, items they would otherwise find easily in the Asian shops before the expulsion was effected.

Even when Amin’s government handed over the former business entities of Asians to blacks, who had to formally applied for them, replenishing stock was their nightmare. Uganda was seemingly isolated, given the fact that most of the trade passed through India, life was so miserable.

Back in Soroti, we were hardly six Asians in civil service who remained. That solitude and negative sentiment created at the time was overwhelming.

People lived in self-pity but never complained to the state for fear of reprisal. There were some notable disappearances of prominent Iteso during Amin’s time. For some of them, their remains have never been found. That was life then!

Even his overthrow in 1979 was a pain. His retreating soldiers looted and killed people in Soroti Town and it took the advancing Tanzania soldiers to restore sanity.

With a tired and battered economy in place, the people looked at Yusuf Lule’s government as God-given, to fix the economic lapses at play, but it was never to be. There was no restoration of law and order— the economy instead degenerated for the worst. As the country struggled to come to terms with the government of the day, Lule was replaced by Godfrey Binaisa.

Like Lule, Binaisa offered little, or no economic incentives to the plight of the day, the rest is history. At 94, I appreciate the good memories which I have lived to witness in Soroti. I have grown up here, nurtured a number of children until I retired in late 1980s after serving as a head teacher. Today, I am a proud Ugandan citizen, a pensioner, and above all, one of the few elders left in this town, which has emerged from a two-street town, to an environment with emerging suburbs.

I am now restricted by age— the good scouting activities that shaped my life right from childhood are no more. I hang up my scouting boots in 2017 when I handed the baton to a young lawyer in town as the patron of the scouts association for Teso. All I am left with is my scout’s regalia, which I occasionally put on.