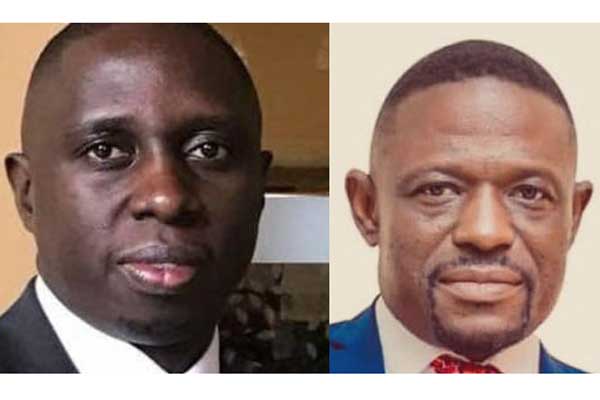 There is a palpable sense of injustice that has gone unchecked for a long time. “These are matters we have argued. The purpose of service is for the person you are suing or the respondent to know there is a case against them but there are instances when a person comes to court to challenge that they were not served,” said Samuel Mulindwa Muyizzi, a lawyer, who was recently appointed the chairman of Kampala Capital City Authority (KCCA) Valuation Court.

Muyizzi’s anger stems from 2006 when Godfrey Nyakana Amooti, of the ruling National Resistance Movement (NRM), caused an upset when he edged Democratic Party’s (DP) Charles Sserunjogi Musoke by 444 votes to take the Kampala Central Division chairmanship setting up a bitter rivalry that went on for years.

Nyakana’s victory rocked the city in the context that not only the capital is known for being an opposition bastion but also Nyakana had just swapped professional boxing for politics thus he was considered a novice who couldn’t outclass Musoke, a veteran politician.

While Nyakana was declared the winner by the Electoral Commission (EC) having polled 15,925 votes, Musoke who got 15,479 votes found the marginal difference too hard to stomach – and decided to take the matters to the High Court.

Musoke wanted Nyakana’s victory to be annulled on grounds that the elections were marred with gross irregularities, malpractices, violence, acts of intimidation and torture, lack of freedom and transparency, unfairness, and commission of electoral offenses.

Particularly, Musoke levelled a catalogue of accusations against the EC – which was attached as the second respondent –  including disenfranchising voters by deleting their names from the voter’s register; carrying out an election on a day that was neither published in the Uganda Gazette nor widely announced in the media, failing to ensure freedom and fairness during the election by allowing Uganda Peoples Defence Forces (UPDF) personnel and militia groups to torture and intimidate his polling officials, agents, and supporters, inter-alia.

In fact, Musoke claimed he never escaped the wrath of goons led by Nyakana as they subjected him to what he termed as inhuman treatment and torture to near-death by stabbing him in the stomach and left-hand thumb.

If Musoke thought the case would be determined on the grounds he had presented in the petition was in for a shock.

Once the case came before High Court’s judge Remmy Kasule, who has since retired having served at the Court of Appeal, Nyakana’s legal team predictably denied the allegations contending election was properly conducted in accordance with the electoral laws.

Musoke’s agents, they said, had signed the Declaration of Results Forms for all polling stations without any of them raising any complaint.

Any incidents of violence, Nyakana maintained, were caused by the Musoke’s supporters and that police acted and the law took its course.

Though Didas Nkurunziza, Nyakana’s lawyer, was present in court, the ultimate reason he fronted for the petition to be thrown out was that Musoke hadn’t served Nyakana with the petition.

Though he wanted the petition throughout, Nkurunziza admitted that they had come to know about Musoke’s petition and filed a reply in protest.

Musoke’s team insisted that Nyakana had been served but he rejected the court papers.  Frank Owere, a court process server, explained how after serving the EC he proceeded to serve Nyakana at Kampala Central Division Headquarters, where he found his secretary who never disclosed her name to him.

Owere explained to the secretary the purpose of his visit and served her with notice of presentation of the petition together with a copy of the petition attached. The secretary read, understood, and delivered the same to Nyakana; who, according to Owere, was in his office reading newspapers.

Nyakana, Owere said, read through and understood the same, but declined to acknowledge receipt, stating he would first consult his lawyer.  Owere’s evidence landed in trouble when it came to Justice Kasule’s attention that the court process server swore another affidavit that seemed to contradict his earlier evidence.

Section 141 of the Local Governments Act, Cap. 243, made it mandatory that service be effected upon the respondents, in person, by the petitioner within seven days of the filing of the petition and Justice Kasule dismissed Musoke’s petition on grounds of non-service.

“The petitioner and his lawyers have themselves to blame for having handled this vital issue of service in such a cavalier and careless manner in this petition,” Justice Kasule ruled.

Curiously, Justice Kasule, in the judgment, admitted that Musoke had satisfied him that 476 registered voters of Kitante Courts DMI (A-L) polling station were disenfranchised when the votes at this polling station were not considered because EC conducted and organised polling at this station in such a defective way that, at the end of polling, there were more votes cast than the registered voters at the station but still went ahead to dismiss the petition.

“Were it not for the nullity of the petition by reason of non-service, the second respondent [EC] would have been held to have conducted the election in such a deficient way that there was failure and non-compliance with the provisions and principles of the result of the election substantially,” he said.

A man casts his vote at a polling station on Luwum Street in the city centre on January 14, 2021. PHOTO/FILE

Besides the Local Government Act, Section 62 of the Parliamentary Elections Act states that for effective service, “a notice in writing of the presentation of a petition accompanied by a copy of the petition shall within seven days after the filing of the petition be served by the petitioner on the respondent or respondents as the case may be,” and has proven contentious over the years with people whose parliamentary victories are being contested accused of hiding in order to defeat the court process.

In retrospect this judgment is now seen as illegal in itself. “The judge here was being subversive and tyrannical and he knew it. When courts create scenarios where those who have problems shouldn’t be heard and those who created problem benefit because the court has a rule to debar litigants. It means everybody who has the means would get away with it,” said Isaac Kimaze Ssemakadde, a lawyer with Centre for Legal Aid.

Sixteen years after Justice Kasule’s judgment, last week, the Court of Appeal didn’t only put the political career of Kampala Central Member of Parliament (MP) on the line when it ordered for retrial of an election petition challenging his 2021 victory, but it also moved to end the debate surrounding what effective service means in parliamentary petitions.

“This is a historic ruling and I think it is important for two reasons:  First, it’s a triumph of common sense and progress over the idiocy and tyranny that had long dashed our hopes in a functional Judiciary,” says Ssemakadde. “The Court of Appeal deserves credit for seizing this historic moment to burnish its brand. All cases should be decided on the merits, not the technicalities.”

The ruling that has excited legal practitioners stems from an electoral petition filed by Fred Nyanzi, of the National Unity Platform (NUP) challenging Nsereko’s victory.Nyanzi, who was beaten by Nsereko by a difference of 1,023, challenged the results on grounds that it was not conducted in accordance with the electoral laws and this non-compliance affected the results of the election in a substantial manner.

Nyanzi, like many other petitioners, soon discovered that serving Nsereko to comply with the law was proving hard. He filed an application seeking, among other things, for the MP to be served through substituted service as personal service had failed.

Justice Philp Odoki of the High Court’s Civil Division declined to grant the prayer for substituted service, but granted the prayer for the enlargement of time within which to serve Nsereko, and later Justice Margaret Apiny threw out the entire petition on grounds that Nsereko had not been served.

Though Nsereko had all a long-feigned ignorance of the petition, when Nyanzi’s appeal came before Justices Geoffrey Kiryabwire, Stephen Musoke, Christopher Gashirabake the legislator who has been in the House since 2011 asked Eric Sabiiti, the EC’s lawyer to also represent him triggering protests from the NUP member.

Nyanzi’s lawyer Justine Ssemyamba contended that Nsereko having been duly served and failed to file a defence had put himself “out of court” and had no “locus standi.” The judges, however, overruled Nyanzi, saying that it was legal for the EC lawyer to represent Nsereko who had said he was never served.

The tide was turned, nevertheless, when the three judges started scrutinising if at all Nyanzi had effectively served Nsereko.

Nyanzi insisted that the service of the petition was actually affected to Nsereko by placing it on his gate at home and also electronically via WhatsApp, but the MP opted not to file an answer to the petition.

Sabiiti, on the other hand, submitted that the service that is envisaged by the law is affecting it personally to Nsereko, and not by depositing the notice of presentation of the petition at his gate or electronically.

Though Justice Apiny had ruled that there was no effective service, the Court of Appeal found that Nsereko had been effectively served when Jackie Mirembe, a court process, on April 12, 2021, went to serve the petition at the MP’s home in Bugolobi before leaving another copy of the petition at Parliament where he works.

The evidence of Mary Tumushabe, Nsereko’s LC1 chairperson, was also helpful to the Court of Appeal.

Tumushabe said she was given a petition by Mirembe to deposit it at Nsereko’s home but on reaching Nsereko’s gate she met a police officer who chased her away. This police officer, she said, followed her to her home and told her that Nsereko had told him to inform her to stay away from those matters.

“We don’t think the police officer could have followed the chairperson to her home without the express permission of the third respondent [Nsereko]. This evidence is corroborated by the affidavit of Benson Kato, a process server of the High Court,” the three judges ruled.

When she dismissed Nyanzi’s petition last year, Justice Apiny insisted that attempts to serve Nsereko at Parliament, the Chief Magistrate’s Court of Mengo, his Bugolobi residence, and via WhatsApp did not amount to personal service envisioned under Rule 6(3) of the Parliamentary Election (Election Petitions) Rules but the Court of Appeal said she was wrong.

“We disagree with this finding. We find that service on the third respondent [Nsereko] was effective because he was made aware of the case in court. It may not have been personal as envisaged in the law but it was effective. He chose not to file a defence of his own volition. We therefore also find that it was enough for the appellant [Nyanzi] to leave a copy of the petition in a conspicuous place at his residence,” they ruled before ordering retrial under a different judge who shouldn’t be Odoki or Apiny.

Former Speaker of Parliament Edward Kiwanuka was saved by High Court and Court of Appeal on grounds that he had not been served personally by his perennial rival Jude Mbabaali as they tussled for the Bukoto Central seat in 2006.

Justice Paul Mugamba, who is now at the Supreme Court, but then a High Court judge, was the first to rule that the court process server taking the petition to Ssekandi’s law firm, Ssekandi and Company Advocates, wasn’t effective.

When Mbabaali appealed, Court of Appeal panel of justices – Alice Mpagi Bahigeine, Galdino Okello, and George Engwau – confirmed the High Court’s judgment saying leaving the documents with Ssekandi’s secretary at the law firm wasn’t effective service, as per the law.