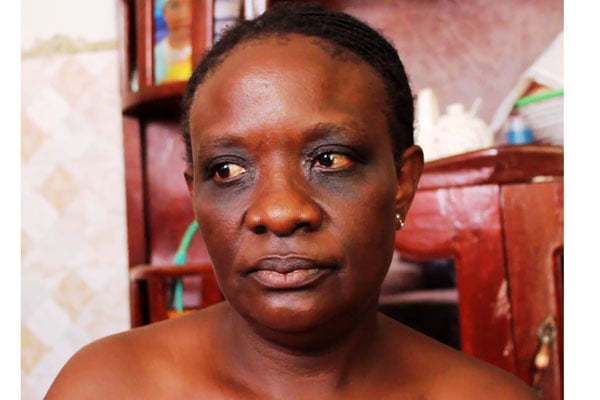 The horrific events that unfolded in Aisha Namara’s life on April 1, 2022 are still engraved on her memory like a daily nightmare.

On the fateful day, the 38-year-old bar proprietor in Lyantonde town council in Lyantonde District who has been bedridden for over two months now experienced what later turned out to be one of the most painful experiences in her life.

The widowed mother of four narrates that at around 3am on the said day, she heard someone knocking on her bar door accompanied by a male voice demanding that she opens and sells him beer. However, after peeping through the window, she saw an armed man in private security uniform.

She says she told the armed man to go away because it was too late for her to entertain new clients at the time, let alone armed ones.

“In this bar, we do not entertain someone with a gun because we do not know your motives. Besides, it is too late for me to open for you,” Ms Namara recounts having told the armed man.

Instead, she says the armed man, who days later was identified by police and his employer, Security Group Africa (SGA) as Benjamin Turyamureeba, shot her through the closed door.

Namara’s leg rotting away  after she was shot by a security guard.

“I heard a bullet sound. The door was closed and I only saw my leg bleeding profusely. Upon looking down, I realized that I had been shot through my right ankle,” Ms Namara narrates.

She was rushed to hospital and reported the case to police. However, Turyamureeba who at the time of her shooting had been deployed to man one of the banks in Lyantonde town council, has never been arrested two months after the incident.

“I was rushed to Mbarara hospital where I have spent over Shs7 million to treat the leg but no one from the security company has since offered any help despite numerous efforts I have made to ask them for financial support,” she added.

Ms Namara says she informed the coordinator of the security company, one Mr Daniel Arinaitwe about her situation but she’s yet to get receive any support.

“Whenever I call him, he says he will come and check on me in hospital but it’s now two months without anything,” Ms Namara said adding that she no longer has money for her medication.

Ms Namara who was referred to Nsambya hospital in Kampala after Mbarara hospital reportedly failed to handle her wound, is now nursing her leg at her home in Lyantonde because she ran out of money for her medication.

Namara’s brother, Mr Edward Miiro accuses police of failing to trace the person who shot her. It’s against this background that he appealed to well-wishers to help his sister get justice and medication.

Mr Miiro says police officers involved in investigating his sister’s case seem reluctant about following up the matter and arresting the suspect.

“We heard that the SGA officers went to the police demanding for their gun. Police should have arrested those ones to lead them to the suspect since he’s their employee,” Mr Miiro said.

Mr Daniel Arinaitwe, the SGA coordinator for Greater Masaka, told this publication that he was aware of Ms Namara’s situation but advised her to be patient as the company mobilises money to cover her medical bills.

He also refuted allegations that the relatives of the victim approached his office about Namara’s situation and claimed that he was on leave by the time of the shooting, although he got to learn about one of their employees’ offence.

The Southern regional police spokesperson, ASP Muhammad Nsubuga told this publication that police are still looking for Turyamureeba who is reportedly on the run.

“We recovered the gun, an AK47, which was used to shoot the victim and it is at Lyantonde police station but we think the suspect is hiding in Kiruhura District. We ask anyone with information on his whereabouts to give us so that we arrest him and charge him accordingly,” ASP Nsubuga said.

But as Ms Namara whose husband died recently in a road crash, waits to get justice and medical support promised by the security company, her leg continues to rot away