I’m pleased with how you’ve managed to unite MPs, Ssekandi tells Among

Sudanese protesters call for the end of military rule – #ugnews24

I’m pleased with how you’ve managed to unite MPs, Ssekandi tells Among 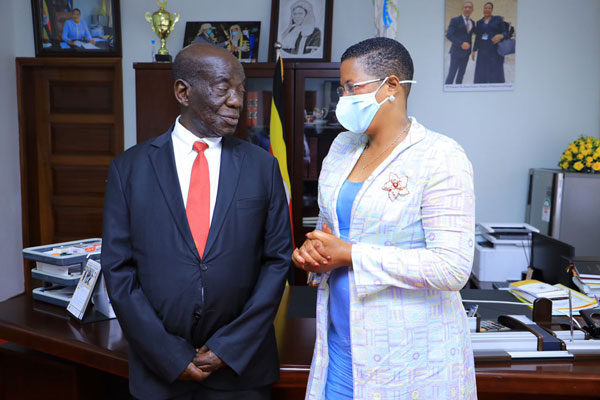 Former Vice President Edward Kiwanuka Ssekandi has lauded the Speaker of Parliament Anita Among for “exceptionally handling business and administration of Parliament” since she rose to the leadership of the August House.

‘’I am pleased with how you have managed to unite Members of Parliament to deliver on their mandate and I will continue supporting and praying for you,” he said during a meeting with the Speaker at her chambers at Parliament this afternoon.Ssekandi, who once served as Speaker, also commended Ms Among for expeditiously handling business and excising good judgement during the last session which saw many bills being passed by the August house.

Speaker Among on the other hand thanked the former VP for maintaining a close relationship with Parliament and for offering wise counsel to the leadership.

Mr Ssekandi served as Deputy Speaker of Parliament and Speaker before he was appointed Vice President, a position he held for 10 years.Bills passed by the 11th Parliament One of the key roles of the Parliament is to pass laws for the good governance of Uganda.  These are done through pre-legislative scrutiny of Bills referred to Committees of Parliament.

Five months into its term, the Parliament passed its maiden Bill- the Administration of Parliament (Amendment) Bill on October 5, 2021.Less than a month later, President Museveni assented to the Bill, making it a law.Parliament followed this with the passing of the National Social Security Fund (NSSF) Amendment Bill a month later. The Bill allowed beneficiaries, who are 45 years and above and have saved for 10 years and more, to receive mid-term benefits.

Parliament is a supposed to process both private members Bill and government business. Even though some private members have attempted to table new Bills, the government has dragged its feet in issuing certificates of financial implications to the members.While the Legislature seems to have set a record in the number of Bills so far passed, questions have been raised on whether many understood the content of the Bills they were passing, especially regarding the Mining and Minerals Bill.