Imbalu fete: Why boys face the knife in Bugisu

Imbalu fete: Why boys face the knife in Bugisu 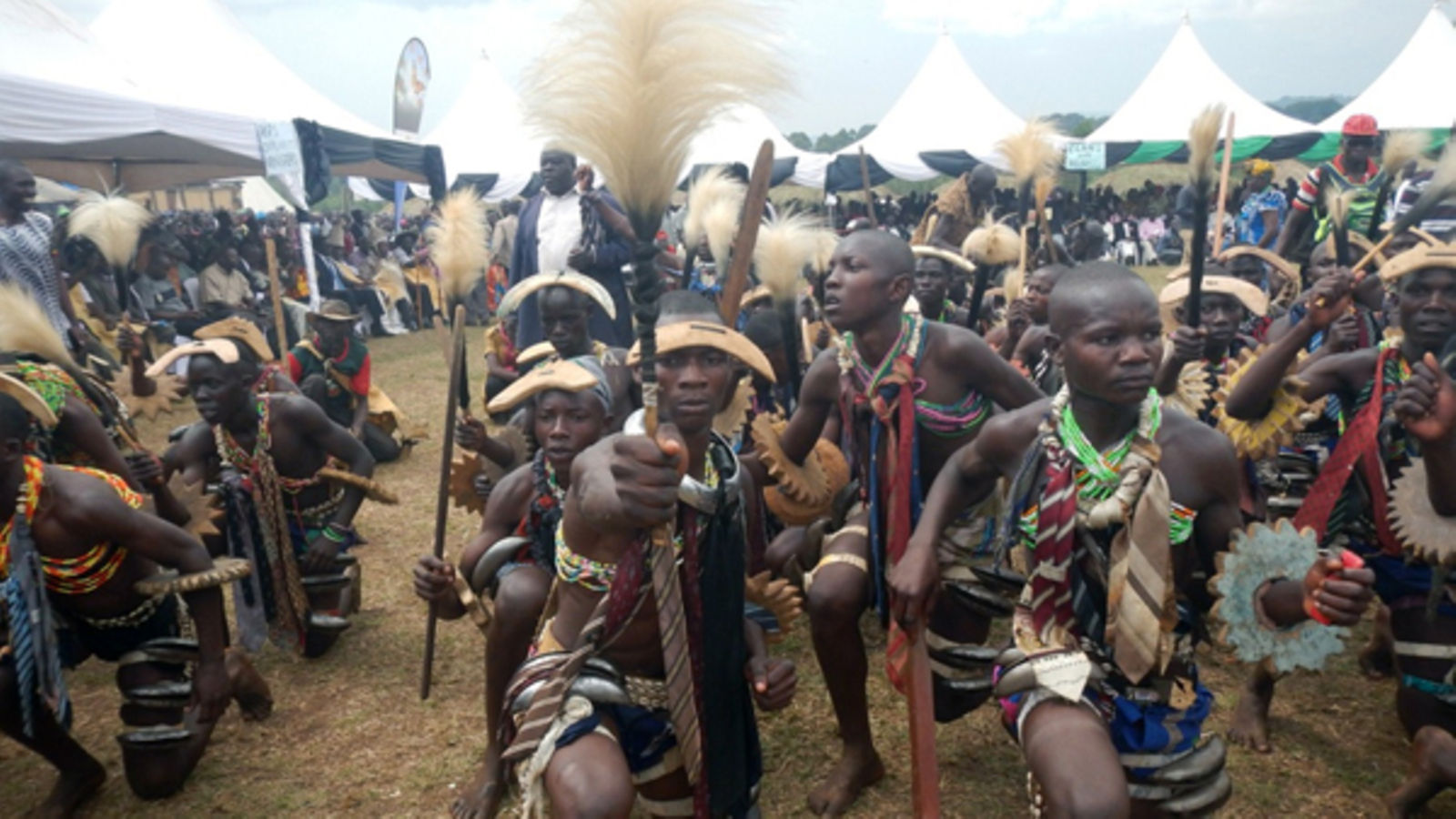 On a chilly Saturday morning, Yasin Wafuba, palpably charged, steps out of his father’s house donning traditional beads and bells fastened to his thighs.

On the horizon, a rainbow lingers and the Wanale hill, which overlooks Wafuba’s home, is covered with clouds and mist while the circumcision candidate stamps the ground.  With his eyes partially glued on his son and on the clouds, Ibrahim Wasukira, says this is a sign that his son is blessed by the gods as he kicks off his trials to face the knife.

“This is his first rehearsal and with such a sign of a spectacular clouds hanging over us, it shows that  the gods are pleased,” Wasukira says with a smile.

Wafuba, who hails from Mayira Village, Bukikoso Parish in Bubyangu Sub-county, Mbale District, is one of the thousands that have been selected in Bugisu to undergo imbalu (male circumcision), which will kick off officially in August at Mutoto Cultural Grounds in Mbale City.

Legend has it that Mutoto is where the first Mugisu [Mumasaba] male was circumcised and it has hence become the traditional ground for the ritual. The ritual is held every even year among the Bamasaba (Bagisu), who hail from different  districts, including Mbale, Sironko, Manafwa, Bududa, Bulambuli, Namisindwa, and some parts of Kenya.

At Mutoto, the imbalu candidates are organised in clusters from different districts. They perform varying dances such as the isonja and ineemba as they wait for the Umukukha, the cultural leader of Bamasaba. The former is the preparatory dance for intending candidates. It is believed that the dance helps the boys acquaint their thighs with bells (bitsetse).Then Ineemba, is usually performed at the end of year, but its main purpose at imbalu is to confirm the newly circumcised as full members of the society.

The recent crisisWafuba,20, in Senior Five at Nkoma Secondary School, had been lined up for  Scientific circumcision in 2020 in line with Covid -19 restrictions but his family refused.Majidu Wabomba, an elder brother of Wafuba, says it would have been a shame to circumcise their brother without going through the requisite rituals just because the government ordered otherwise.

“We must circumcise as we were ordered by our ancestors. It is not mere cutting of the foreskin of the penis, it’s a sacred  process as it was conscripted by the gods,” he says with anger.The government banned public gatherings to curb the spread of the coronavirus and this left the Bagisu   two options, to either go for  ‘scientific’ circumcision or wait for another even year. Many families opted for the latter.

John Mafabi, one of the elders and a resident of Link Cell in Northern City Division, says imbalu cannot be a ritual without dancing and singing the traditional songs, visiting relatives and practicing Isonjo dance.

During the rituals, the blowing of horns and playing of kadodi take over Bugisu. The candidates wear dance outfits including bells (bitsetse), beads (zisukhusukhu), skin belts (Lihabi) cowries, and head-dress (ijirubisi).Mafabi says such  activities climax with the candidates facing the knife, starting from the month of August after the official launch.

“That is how our culture is and we must practice it as our ancestors did, not any other way,” he says.It is unfortunate, Nathan Masaba, another elder, says a section of Bamasaba are supporting campaigners who want to modernise the tradition.“Our sons are abandoning our ritual and taking their children to be circumcised in hospitals at an early age,” he says.

One must get readyBamasaba elders say when the boy is ready for circumcision, he first announces his intention to the mother.“The mother will tell the boy’s father. The couple will then discuss the matter and then start preparing the requirements which include ensuring the millet and animals to be slaughtered are ready,” says Fred Mudebo, a resident of Bulambuli Village in Buyobo Sub-county, Sironko District.

It is said some Bagisu, who in fear try to flee the knife and take refuge in other districts, are usually followed up and circumcised.Sarah Nambozo, a resident of Makudui village in Namanyonyi Sub-county says women are also taught to secretly report their uncircumcised husbands or lovers to elders.“As Bugisu women, it’s also our responsibility to report uncircumcised husbands or lovers to the elders,”  Nambozo says.

Recently, a 34-year-old mechanic in Mbale main garage had hidden for  years but his wife reported him and he was nabbed on January 1. He was circumcised forcibly, and made news.

Imbalu as  identityImbalu is a very old custom with mysterious and varied tales of its origin. One of them, according to Omar Njofu, the chairperson of cultural council in Bamasaba Cultural Institution, is that circumcision was introduced to the Bamasaba through intermarriage with Kalenjin women.

“This initiation into manhood ceremony has no equivalent and remains a myth to many people across the globe,”  Njofu says.John Musila, an elder and former spokesperson of Inzu Ya Masaba,says the imbalu is the only identity of Bamasaba.Musila  says Bamasaba calendar has two years categorised as; the female and male year.

“The male year is to initiate a boy into manhood. You are not a man until you are circumcised,” he says.He estimates that imbalu has taken not less than 500 years since the circumcision started.Prof Timothy Wangusa, in his book Upon This Mountain, circumcision (known as Imbalu, among the Gishu) is for strength, valour and manhood.

“We love our culture. We have registered with the Uganda Tourism Board (UTB) as a marketing strategy to popularise our imbalu,” says Musila, also MP for Bubulo East .He emphasises that they have great surgeons who circumcise the candidates in less than one minute unlike the medical surgeons.

Jude Mike Mudoma, an elder, says it is difficult to detach Bagisu from imbalu because it is their identity.“It represents courage and signifies a boy’s respect for his family and clan. It also aims at strengthening our cultural continuity,” he says.

After circumcision, elders talk to the newly initiated boys, encouraging them to work hard, get married and continue with their education, if they are still in school.

MeaningSteven Masiga, a cultural researcher, says among the Bagisu chopping off the foreskin of a candidate penis is fulfillment of one of the conditions to adulthood.“In Bugisu, the love for sex or marriage is designated as the origin of imbalu among bamasaba,” Masiga says.

He says imbalu has undergone a series of reforms, from the use of crude instruments such as razor blades and sophisticated blades including hospital circumcision.“Some aspects that made circumcision then including rubbing of ash and red pepper in the manhood of a candidate have been abandoned to some extent,” he says.Mathias Nabutele, deputy prime minister, Inzu Ya Masaaba, says other tribes that live in Masaabaland have also adopted male circumcision.

“This ritual is also for  social economic empowerment because  the candidates are given land and animals to start their own life,” Nabutele, says.

Bagisu live on the slopes of Mt Elgon. They  speak one distinct language, but with several dialects spread among three families of Mwambu, Mubuya and Wanale.