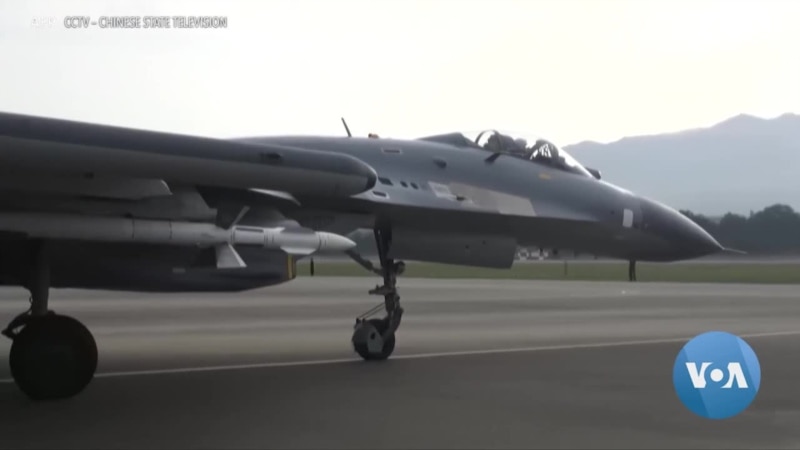 TOKYO —
Western allies in the Indo-Pacific region have voiced alarm at China’s military exercises surrounding Taiwan and are seeking to bolster links with the United States, Europe and NATO in response to Beijing’s actions.
China began five days of live-fire military drills in seven zones surrounding Taiwan on Thursday, in apparent retaliation for the visit of U.S. House of Representatives Speaker Nancy Pelosi to Taipei earlier this week. China claims Taiwan as part of its territory. China’s People’s Liberation Army said the drills would rehearse imposing a naval and air blockade.
Missiles
Japan said five missiles landed in its exclusive economic zone around islands it claims close to Taiwan.
“To have five Chinese missiles fall within Japan’s EEZ like this is a first. We have protested strongly through diplomatic channels,” Japanese Defense Minister Nobuo Kishi told reporters Thursday.
Pelosi arrived in Tokyo on Friday on the last stage of her Asian trip, along with several other U.S. lawmakers, and met with Japanese Prime Minister Fumio Kishida. The two allies pledged to work together to maintain peace and stability in the Taiwan Strait, a key shipping route.
Fallout
There is nervousness in Japan over the fallout from Pelosi’s visit to Taipei, the highest-level visit by a U.S. official in 25 years, according to Ryo Sahashi, an associate professor of international politics at the University of Tokyo.
“I really think the situation is really serious. And my point is first, do we really need this crisis? Is this really a strategic benefit for us? I don’t think so. And second, the Japanese government might not predict correctly about the Chinese response,” Sahashi told VOA.
Strengthening ties
Japanese defense forces are taking part in this month’s Garuda Shield military exercises in Indonesia for the first time, alongside the United States, Australia and Singapore, signaling strengthening ties with regional and NATO allies.
Meanwhile Japan, South Korea and Australia took part in the June NATO Summit in Madrid.
“We have to make a big partnership, not only to push back against Russia, but also to push back against Chinese ambitions,” Sahashi said. “So from that perspective, our partnership with NATO has a really, really big importance for our own Indo-Pacific strategy. And I think it is unstoppable, and this direction will not change.”
Taiwan defense
While visiting Japan in May, U.S. President Joe Biden said he would be willing to use force to defend Taiwan, a comment that drew fury from Beijing and appeared to stretch the limits of the U.S. policy of “strategic ambiguity” toward the island.
“We made a commitment. We support the One China policy. That does not mean that China … has the jurisdiction to go in and use force to take over Taiwan. So we stand firmly with Japan and other nations to not let that happen,” Biden said at the time.
The White House did not endorse Pelosi’s visit to Taiwan but defended her right to travel there. In July, Biden told reporters “the military thinks it’s not a good idea right now” for Pelosi to make the trip.
Europe ties
The threat from China is also driving closer links between European NATO members and their Asian allies, said Tetsuo Kotani, a professor of global studies at Meikai University and senior fellow at the Japan Institute of International Affairs.
“I think China’s massive military exercise will further connect Asia and Europe in the face of China’s provocation,” Kotani told VOA. “Here in Asia, Japan of course, Australia and New Zealand welcome Europe’s stronger commitment to this region. And more recently, after the change of government, South Korea also is seeking stronger ties with Europe.”
Ukraine invasion
Visiting Washington last month, Japanese Foreign Minister Yoshimasa Hayashi said Russia’s invasion of Ukraine has focused minds on threats in the Indo-Pacific region.
“Even in this region, the logic of brute force is gaining more traction over the rule of law, and the strategic balance in the region is increasingly challenging for Japan and the United States. … We are facing a watershed moment. What is happening in Ukraine must never be allowed anywhere in the world, including especially in the Indo-Pacific,” Hayashi said.