Kadaga tells CEC to back off speaker race

Kadaga tells CEC to back off speaker race 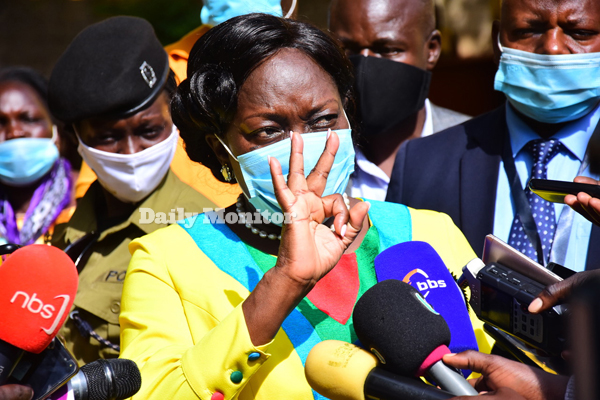 Kamuli District Woman Member of Parliament Rebecca Kadaga, who has been Speaker of the dissolved 10th Parliament, yesterday said “it is undemocratic” for members of the National Resistance Movement (NRM) top organ to predetermine the party’s flag bearer for speakership.
Ms Kadaga was responding to journalists’ questions at the party’s electoral commission at Plot 10, Kyadondo Road, an upscale neighbourhood of Kampala, after expressing her interest to the party to retain the speakership job in the 11th Parliament.The journalists had asked Ms Kadaga to explain why she subjected herself to a party organ (the NRM Central Executive Committee) she had previously pigeon-holed as “undemocratic.”
In response, Ms Kadaga yesterday repeated the attacks on CEC and threw a dagger, questioning why President Museveni goes back to the party after every five years and asks them what they can do and wondered why the party now wants to ring-fence the position of speaker. “You don’t listen, you don’t listen. I said it would be undemocratic for CEC to sit five years early and say five years later so and so will be our speaker. Why don’t you do that for the President? Every five years, he comes back and says elections are here, what do we do?”  she said.
“We cannot sit here even in my constituency in Kamuli, you cannot say in five years you will be our MP.  When five years come, you must go back and subject yourself to them. It will be undemocratic for them [CEC members] to say [that nobody should contest for the position [of the speaker] since CEC already selected a candidate. You have selected! Are you selecting your cattle?”
Ms Kadaga is facing challenge from, among others, Omoro MP-elect and NRM vice chairperson for northern Uganda Jacob Oulanyah, who has been Deputy Speaker in 10th Parliament, and is reported to have been endorsed by CEC in 2016 for Speaker in the 11th Parliament.  In March when the issue of Speaker first emerged on the floor of Parliament, Ms Kadaga clashed with former Kiboga District Woman MP Ruth Nankabirwa over the 2016 CEC resolution.
Kadaga, Nankabirwa face offTrouble started after Ms Nankabirwa reminded Ms Kadaga about the proceedings in the CEC when she faced off with Mr Oulanyah for the same position in 2016. “I am the chair of the NRM Caucus and that position makes me a member of the CEC of NRM. I attended CEC when we were handling the candidates who had contested at that time for Speaker and Deputy Speaker… What I posted was a reminder of the CEC decision of 2016 where CEC persuaded Hon Oulanyah to step down for Right Honourable Rebecca Kadaga,” Ms Nankabirwa said.

Ms Kadaga accused Ms Nankabirwa of importing issues of CEC into the discussion on matters that are internal for Parliament. “I don’t think CEC has a right to bind a future Parliament before even they are elected. That is totally undemocratic.  Stop talking about CEC here,” she said.Ms Kadaga was a beneficiary of the 2016 CEC resolution she now contests, which was used to force Mr Oulanyah, then her deputy Speaker, to step down to allow her return for the five-year second term that just ended.
Sources said the decision was reached after Ms Kadaga made a case that it would be unfair to her to lead Parliament for one term yet her former boss Edward Ssekandi served two terms (2001-2011) before he was appointed vice president.CEC members, including President Museveni, bought the argument and backed Ms Kadaga’s second term. CEC has a strong say in determining who becomes the Speaker and Deputy.
Ms Kadaga and Mr Oulanyah both expressed interest in the Speaker job although the latter hasn’t picked the forms as he will be sworn in today.  As the two principals gear up for what is expected to be a divisive contest in CEC and Parliament, their relationship remains frosty to the extent that they no longer talk to each other.Mr Oulanyah is determined to unseat Ms Kadaga, who was elected Deputy Speaker in 2001, a position she held until May 19 2011, when she was elected Speaker of 9th Parliament.
The President has on several occasions tried to reconcile the two but the bad relationship has persisted.Mr John Kyalimpa Kijjagi, the NRM electoral commission vice chairperson, yesterday said they had received three applicants; one from Ms Kadaga, who is interested in the speaker job, and two others; Ruhinda North MP Thomas Tayebwa and Bukedea Woman MP Anita Among, who are competing for deputy speaker.
The party electoral commission asked their members on Tuesday to express interest in writing for either positions so that they are first vetted internally to pick their flag bearers when Parliament finally votes on Monday who will be the next speaker and deputy speaker.Mr Oulanyah and other party members have up to Friday this week to pick and return nomination forms after which the names will be sent to CEC on May 22 for vetting.  CEC will forward their preferred candidate(s) to NRM caucus on Sunday.
On Monday, May 24, the NRM flag bearer will face off with FDC’s Ibrahim Ssemuju Nganda (Kira Municipality) and DP’s Richard Ssebamala (Bukoto Central).Parliament is expected to convene next week at Kololo to elect Speaker and Deputy Speaker of 11th Parliament.The party leadership said they will receive applications from only registered members who have been sworn in as MPs in the 11th Parliament. Parliament concludes the four-day swearing-in of the last batch of the 529 MPs today.

A Kenyan politician harboring presidential ambitions has to do some soul searching before he considers running come 2022. A video...