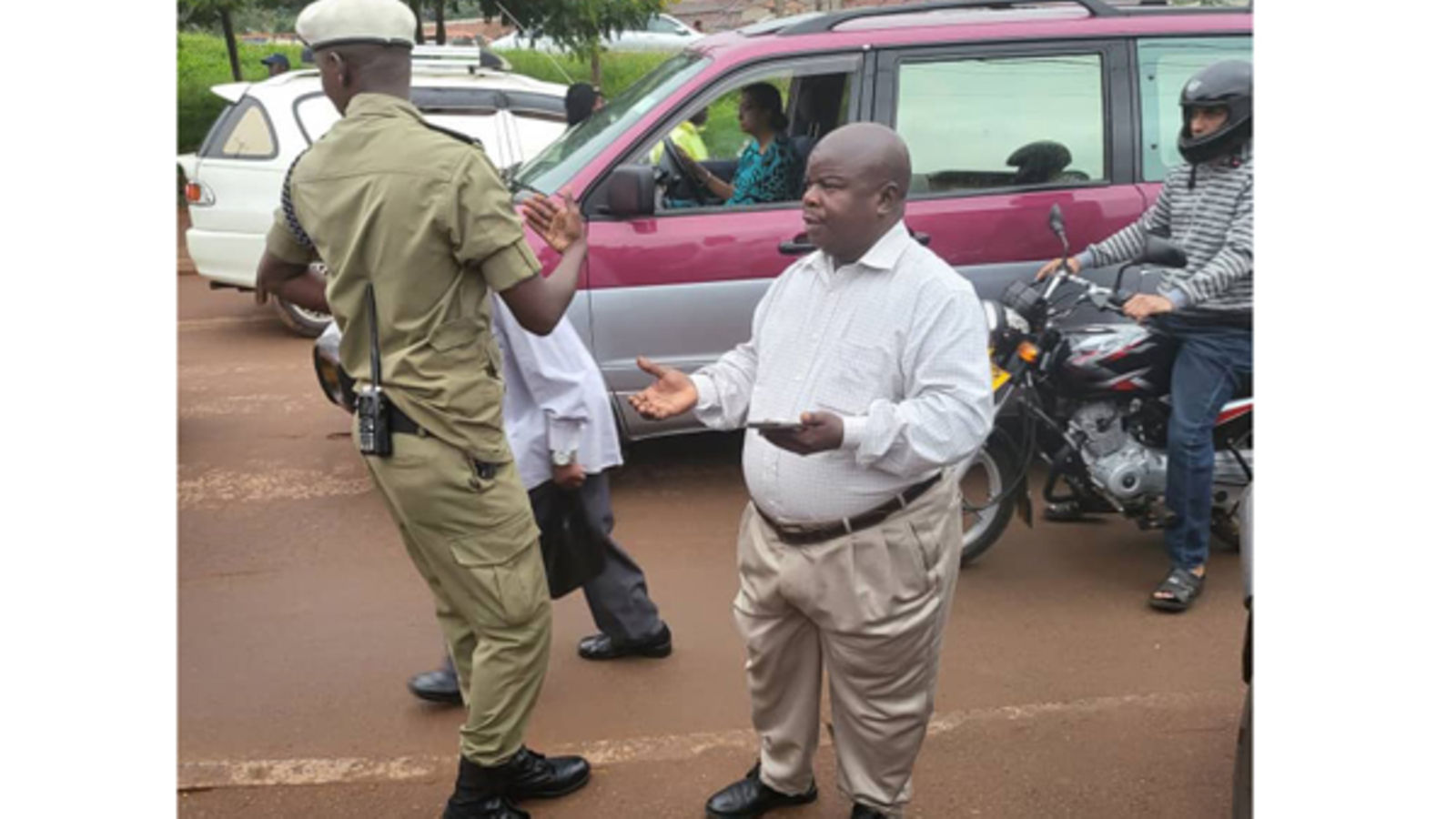 During the peak hours of traffic gridlock in Kampala, masked security personnel armed with guns were filmed making threats to a traffic officer on Jinja Road mid-last month. These men had earlier on illegally stripped the traffic officer of his powers and taken control of traffic to pave way for a private car, which by law has no right of way.Even when he tried to explain that he is in charge of traffic and his powers were being usurped, the security personnel, who were dressed in black uniform, did not yield.Such scenes are frequent on roads within the greater Kampala, where high-profile government officials, including ministers, judicial officers, and army officers, who are not entitled to a right of way, brazenly commit traffic offences.

Often, the traffic officers too meek to face their tormentors look on helplessly to avoid the fate that befell some of their colleagues, including police constable  Robert Mukebezi, whose leg was amputated after being shot in January.The vehicles or persons with a right of way are provided under Section 123 of the Traffic and Road Safety Act. They include—ambulances in an emergency, police patrol cars and military vehicles on a mission or whilst escorting a special army official, government vehicles transporting the President, Vice President, Prime Minister, Speaker and Deputy Speaker, Chief Justice and Deputy Chief Justice and bullion vehicles from the Central Bank of Uganda. Others include vehicles of visiting dignitaries.

The mess on the road sharply contrasts the beautiful city that is nestled across seven green hills and comes to life with its boulevard streets.The boda boda cyclists go a notch higher in violating traffic rules creating some of the most chaotic scenes on the ailing roads in Kampala riddled with potholes.This impunity is symptomatic of road usage across Uganda’s narrow roads peppered with over-speeding, driving under the influence of drugs and alcohol, and the flouting of traffic laws.In 2019, Uganda ranked dismally as the 13th highest country in regard to road accidents in Africa, which has the highest road fatalities in the world.

It registered a mortality rate of 29.4 per 100,000 inhabitants. The situation appears to be getting grim.Statistics collated by the police Directorate of Traffic and Road Safety indicate that 176 lives were lost last month. A further 659 people have been left nursing severe injuries from the accidents that also include 405 serious accidents. The fatality data collection system spotlighted 153 lives lost in traffic crashes in April. This means that 329 lives have been lost over a 45-day stretch and the average tally is 12 lives are lost daily. The festival season usually registers the highest road carnage, and it stood at a staggering 473 lives that were lost in December 2021.

The pattern of indiscipline on roads seems to spread out of Kampala to some of the major arteries that connect the city to the countryside.Perhaps the offenders have been emboldened that the words of the Commissioner Transport regulation and safety, Mr Winston Katushabe, quoted as saying, “We are opening a war at government vehicles now in addition to boda bodas who exhibit impunity, this impunity by such hooligans must be checked.” In contrast, others continue to emulate officers such as Uganda’s envoy to Burundi, Maj Gen Matayo Kyaligonza, who assaulted Sgt Esther Namaganda in Seeta Town when she stopped his vehicle for making a U-turn at a wrong point in February 2020.

In January, a UPDF officer shot police constable Mukebezi in the leg after he towed a UPDF vehicle that had knocked down a signpost at Kobil fuel station in Ntinda, a Kampala suburb.“The situation is bad, the most unfortunate part is that it is involves government cars and VIPs. There is a lot of impunity, everyone thinks they are big and have to be given all privileges. At the end of the day, it has caused a lot of problems, traffic management is a bit hard now, there are many people on the road who feel they are privileged, most of them are armed, have bodyguards. We experience this on a daily basis,”  Mr Rogers Nsereko, the Kampala Metropolitan Traffic Commander,  said.

In an interview with this publication, the Works and Transport minister, Gen Katumba Wamala, attributes part of the problem to security threats.

“Some of them, its that kind of environment, that security bubble which they move in was forced on them, it came because of the threats on government officials lives, that’s why some of us, who never had the security bubble around us, were forced to have it and in the event you find that the protecting element is either very uncomfortable. For example, keeping the VIP within the confused jam, they try to whisk them away in the event something happens while they are not moving, they are not blamed for it,” Gen Katumba says.On June 1 last year, Gen Katumba, who is the former Chief of Defence Forces, survived an assassination attempt on his life in Kisaasi, a Kampala suburb, that resulted in the death of his daughter and driver.

On March 30, 2015, one of the country’s top prosecutors, Joan Kagezi, was shot dead in Kiwatule and two years later, the assistant Inspector General of Police, Andrew Felix Kaweesi, was assassinated in Kulambiro. Both Kagezi and Kaweesi barely had enough security detail to fend off the attackers.The recent attack in April was on principal Judge, Flavian Zeija, who survived unharmed after gunmen shot at his convoy.Mr Cuthbert Isingoma, the secretary general of the watchdog organisation, Civil Society Coalition on Transport in Uganda,  accuses government officials of exploiting safety concerns to commit traffic offences.“People were given authority to have escorts, but instead of using them as escorts, they started using them as a lead which is wrong, people do not know the difference between having a lead car and an escort car. The President was clear, he gave them escorts to guard them not lead them.

There are officials authorised to have lead cars and those to have escorts, which is basically security around you and are not supposed to open way for you,”  Mr Isingoma says.Gen Katumba also admits that some VIPs are abusing their privilege.“There is a level of abuse that is regrettable. Some people have taken it a notch higher than it should be when they are given protection because you can still move reasonably well with your protection element without necessarily causing a lot of unhappiness to other road users or inconveniencing them,” he says.

There has been a debate on whether to let some VIPs and some lawmakers, who are facing security threats, have armoured vehicles.President Museveni in 2018 issued a directive to the Finance ministry to procure armoured vehicles and facilitate highly-trained guards for Members of Parliament who are under threat. A meeting of the Parliamentary Commission convened by the then Speaker Rebecca Kadaga resolved that it was not financially viable for government to procure such vehicles and pay for the security detail of MPs.The security threat has extended to the investor community, which may require an extra layer of escorts, which will likely breed chaos on Kampala’s narrow roads.

“Of recent, there has been a threat on Chinese investors and many of them have applied to bring in armoured vehicles, some of the have been attacked in broad-day light, they are now scared, ordinarily these vehicles will be restricted to some people, but now what do you do because the law says this, do you ignore some of these people’s lives?” Gen Katumba asks. “Unfortunately, this is what is happening. If we don’t get the support we need, we shall not have a lot to do but go with the flow. If a boda boda is seeing a senior government official keeping right of the road, who are we to say they are wrong. The law is not selective, if it touches the senior government official, it should be able to affect the boda boda,”  Mr Rogers Nsereko, the Kampala Metropolitan traffic commander,  says.

Traffic at Queens’way in Kampala. The mess on Kampala’s roads sharply contrasts the beautiful city that is nestled across seven green hills. PHOTO/ MONITOR

There are fears that traffic officers will be compelled to shirk their duties.“You have heard of traffic officers being shot while on duty. We have not failed to do what we are supposed to do but what is important is our lives, our lives matter, I won’t be killed over a traffic matter because I am stopping someone to keep right and I be shot. I won’t let things go to that level, I will let that person go and I remain with my life and peace. If you see that your life is at risk, the best option is you let someone go, your life matters at the end of the day,” Mr Nsereko says. Some vehicles with civilian number plates have also been sighted pushing other road users off the road with sirens.

Could it be that traffic officers who take bribes to cover up mistakes of motorists are partly to blame?“It is true we have some corrupt traffic officers but it takes two to tango, the moment you blame a traffic officer for taking a bribe, you the giver of the bribe too are guilty. I understand in the Anti-Corruption Act its stipulated that the giver and receiver are as guilty. So that song of traffic officers are corrupt should stop, who is giving that money? Are they picking it from your pockets? Most times its offenders who begin the process of corruption,” Mr Nsereko says.

So, who will maintain order on Kampala’s roads if traffic officers who are required to enforce traffic and road safety laws are incapacitated?

“The indiscipline on the road is a general problem, it’s not a preserve of government vehicles, generalisation will not help us address the problem at hand, it is a responsibility of all us.  As the ministry we are planning to have regular trainings for government drivers and also taking action, there is a time the media started name and shaming the bad drivers, when you say bad driving, whether it’s a government vehicle or not expose them, even the bad boys expose them two times and you will see, cracking this indiscipline is a responsibility of all of us,”   Gen Katumba says.“We need to all be responsible, road safety is not a responsibility of only the government, our cry is to come in more in road safety, it is not funding road safety, if you are giving Works ministry Shs6 trillion and only giving Shs600m for the whole year for people to manage road safety, that is very little money, put in more,”  Mr Isingoma says.

Commended“We call upon civil society, it plays an important role in supporting most of our endeavours because they put the issues to light, the media, social media continue exposing these errant drivers who misbehave on the road, most of the vehicles that appear on social media, we actually track them down,” Mr Nsereko says.The World Health Organisation estimates that approximately 1.3 million people die in road traffic crashes and 50 million injuries are recorded annually all over the world.

In Uganda, latest figures from the 2021 Annual Crime and Traffic/Road Safety report shows a 14 percent increase in the total number of persons killed in road crashes from 3,663 in 2020 to 4,159 in 2021.The United Nations General Assembly has set an ambitious target of halving the global number of deaths and injuries from road traffic crashes by 2030.But Uganda continues to regress with highly-placed government officials showing a lack of discipline and empathy for other road users.