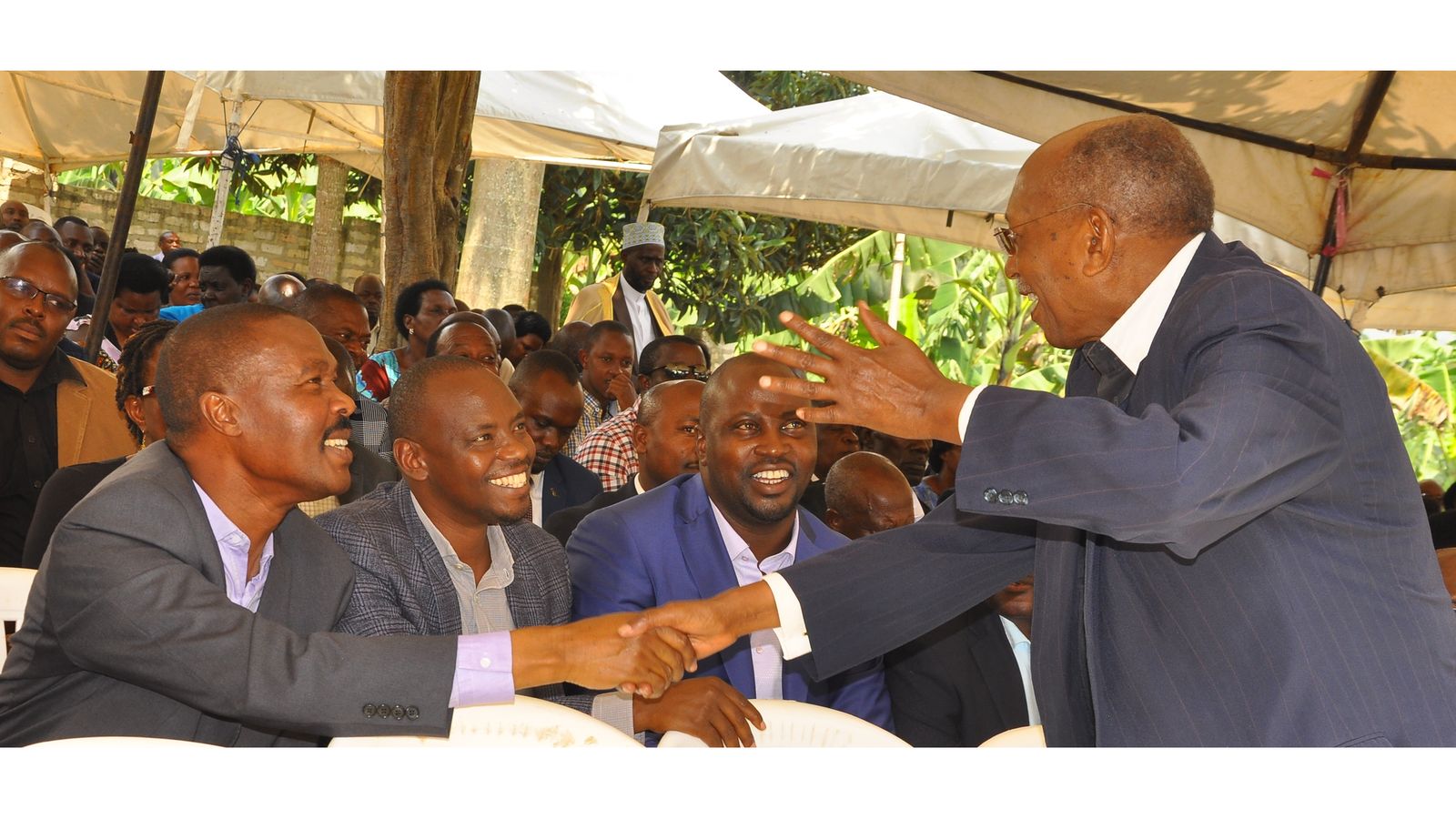 A brown casket sits in a polished lobby where the walls are strewn with several hand-painted art pieces. Hundreds of people from all walks of life throng the place to pay their respects.

Two pallbearers in neat black suits stand by the casket. Clad in a white shirt, black suit, red bow tie, the lifeless body still exuded gentleness, freshness like he was just taking a nap. No one could imagine that the fangs of death had snatched Yona Bankobeza Kanyomoozi from us.

The session to view the remains of Kanyomozi is briefly interrupted by a shriek from an old woman as she approaches the casket. After viewing, she tugs at the casket and cries louder:

“Yamawe, Kanyomozi wansigaho ngu ngirenta, kaniiwe mbeire nyine omunsi egi (Runyankitara loosely translated as,  ‘Ohhh Kanyomozi now you have left me, what shall I do after your passing, you were the only one for me in this world).” Other women hold her by the shoulder and get her a seat.

From old to the middle-aged, men majority in red, black, white; line-up to view a man they cherished. They stop, take a bow and leave. Some wipe their eyes, sob uncontrollably and others look crestfallen.

Members of the UPC place a wreath on the casket of  Kanyomozi during his burial at Rwashamaire, Kajara County headquarter grounds. PHOTO | PEREZ RUMANZI

Among them we get to learn are comrades, colleagues and friends who share memories of the fallen dignitary.

“Kanyomozi was just a forgotten hero, an unsung hero of his time. He was the most sophisticated man I have ever met. Someone who seemed to never  age. He did everything for his country, for freedom of his friends, gave life and shall live forever,” Prof Ephraim Kamuntu, a former colleague in politics, and business partner says of his friend.

Tales of their heroism in school, business, government, life in exile in war and in stability, paint pictures of great comrades who struggled for a better life, lived it and the world fell as they saw it, only to live like God had designed for  them to live.

After his Senior Four, Kanyomozi was a licensed teacher who taught History, Science and Mathematics at Mbarara High School and among his students was President Yoweri Museveni, Eriya Kategaya, Prof Ephraim Kamuntu, Prof James Ntozi, Frank Kamurari Ahimbisibwe and Yorokamu Kamacerere in 1960.

For Prof Kamuntu says he was an excellent teacher of History of Exploration and talked passionately about the likes of , especially Christopher Columbus an Italian explorer and navigator who completed four Spanish-based voyages across the Atlantic Ocean and Ferdinand Magellan, a Portuguese explorer.

He went ahead to eulogise his friend.

“After Ntare school, he (Kanyomozi) was admitted to the Royal College, now Nairobi University. He applied for a scholarship in the US while there, Kanyomozi thought he was not getting enough from the university (Lincoln University, Pennsylvania) he was admitted to, he sought another scholarship in the London School of Economics, this meant he was to pay part of the tuition fees. Look at the kind of man who can abandon a scholarship because he wants a bigger challenge,”  Prof Kamuntu adds.

While in London, Kanyomozi became a darling of many, most notably, he became friends with Governor Sir Andrew Cohen.

“He was handsome, smart and sophisticated, and this man(Kanyomozi) fell in love with the daughter of Sir Cohen, the most feared governor of Uganda. ‘All London’  sang his name,” he recollects.

When he returned in 1966, he was employed in government as an economic advisor and personal assistant to the chairman of Uganda Electricity Board, a job he held until 1972.

He went into exile after Amin overthrew Apollo Milton Obote in 1971. This, was the time he joined politics. Kanyomozi was a member of Save Uganda Movement, a group of exiles that fought against Idi Amin in 1970s. The group later merged with other groups to form the Front for National Salvation (Fronasa) and later the Uganda National Liberation Front (UNLF) following the Moshi Conference. While exiled in Kenya, he was employed by East African Telecom Network Extelcoms.

In 1977, he was nominated for a position of economist at the African Development Bank  in Abidjan Cote D’Ivoire  up to 1979 but returned home.

After the war,  Kanyomozi was appointed minister for Cooperatives and Marketing in 1979 and a member of National Consultative Council, a portfolio that he held until 1985 when the UNLF fell.

“As minister for Cooperatives he was given responsibility to revive the fallen economy, stabilise marketing for coffee, cotton and other agricultural products as well as uplifting agricultural production. It was no mean feat, no wonder some of the cooperatives are still alive,” Jimmy Akena Obote, former first son and president of the UPC  recollects.

In 1980, Kanyomozi won a parliamentary seat as MP for Bushenyi South constituency- the current Kajara County.

In 1989 when the NRC was constituted, Kanyomozi was elected back to parliament where he served until 1996.

While his burial evoked old political stories, there were still many of school times at Mbarara High school, Ntare School, Nairobi, US, London where he pursued his studies.

“He was very smart, all his shirts trousers, bow and neck ties matched the occasion. While most people adopted red shirts and black for UPC, he wore a shirt with red and black patches and, his dress code matched every function he attended. I believe this was because of  his London-training,” Prof Patrick Rubeihayo says.

Born in June 1940 in Kibaare village, Rukoni Kibatsi Sub-county Ntungamo District, Kanyomozi married Dorothy Wanjiru  while in exile who according to his friends, complimented him. He was an epitome of accountability, at family and leadership traits.

“He would seek accountability for any coin. Before my girlfriend and I, got married, we lived with him, and at times he  passed off as  stingy and we nicknamed him Miser.  I believe that is where my wife got that character trait, it is hard to get a coin off her,” Electoral Commission commissioner Stephen Tashobya, says of the late.

To his son Sabiti Kamugisha, Kanyomozi never pretended to love.

“Our father loved, he was a counsellor and an encouraging parent, a fighter and a provider. However, he would never give out a coin without  asking for accountability.  Dad, would even ask for a receipt for a bag of charcoal  from people at home. That was part of nurturing,” Kamugisha says.

At home, Kanyomozi paid school fees for most of his nieces, nephews, community members and established projects that employed many. At his death he had established a big dairy farm at Rukindo in Ntungamo Municipality, poultry and piggery at Kabahambi in Ntungamo Municipality, and more than 80-acre coffee farm at Rwashamaire and was renovating his house to suit the modern trends.

Also, Susan Muhwezi and her brother Bob Kabonero and the leader of opposition in parliament Mathias Mpuuga  cannot  go without  notice.

Rwakasisi who served a death sentence and was pardoned seven years ago, describes Kanyomozi as a fearless hero who could sacrifice his life for friends.

“I was the most unfortunate of my friends, every time there was trouble I was the one in it and the rest would escape, it was always Kanyomozi however, who would come to my rescue, even in hardest of situations,” he says.

Kanyomozi is survived by five children Sabiti Kamugisha, Sanyu Kentaro, Kamugaruire Kwesiga, Samantha Kiconco and Ricky Busingye. Kanyomozi died on August 28, at Nakasero Hospital due to multiple organ failure resulting from several infections including diabetes and cancer. He was buried at his home in Rwashamaire on Friday September 2.

• Apart from the known portfolios, Kanyomozi had a non-government organisation founded in 1985, community management services.