Learners stuck at home as parents fail to raise fees

Learners stuck at home as parents fail to raise fees 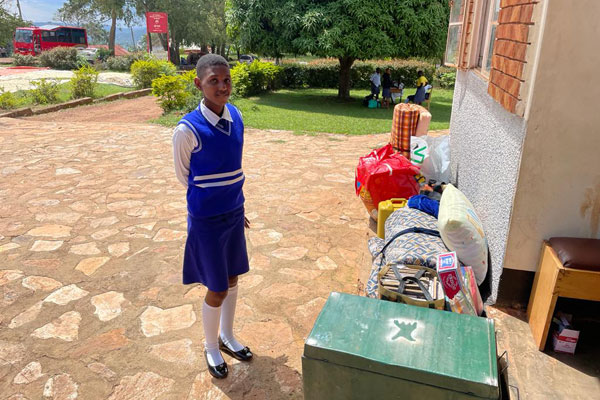 Many schools across the country have continued to record low learners turnout in the first week of Third Term over lack of fees.Third Term is a critical period in a learner’s academic life because it determines progress from one class to another. Some schools have increased fees despite pleas from the government to maintain last term’s fees structures. The term officially commenced on Monday, but some schools have increased fees by between Shs30,000 and Shs100,000, while others have tactfully concealed the increment in the requirements’ category.Many school managers have defended their decision, saying it is intended to cushion them from the inflationary pressures that have more than doubled their operational costs.  At Mungula SS in Adjumani District, which is a refugee dominated school, only 32 students of 385 had reported by Wednesday afternoon.

The head teacher, Mr Justine Thomas Edema, says the poor turnout will affect the completion of the syllabus, especially for candidate classes.“Parents are generally complaining of the school fees challenges and there are some of those with second term school fees arrears totaling to  Shs20 million,” he says. Mr Julius Ocukul Obore, the head teacher of Mbale Progressive High School, says Third Term is short (14 weeks)  and students have to write their promotional exams . “The turn up is not so good and one of the factors is the issue of school fees, most of the students went with fees balance and we are not allowing them without clearing the arrears,” he says.

Mr Sam Mabonga, the head teacher of Bugisu High School, says the turnout is the worst they have registered in the past five years. “So far we have about 40 percent of the students in the school and most of them are in candidate classes,” he says . Mr John Ssentume ,the head teacher of Kyotera Primary School in Kyotera District, says only 30 percent of the students have reported .“ We hope others will report in the coming days  although some  parents are pleading to bring the children without paying anything which will give us hard time since we also  lack enough funds to run the school ,” he says. Ms Margret Nakitende , a single mother of three in Masaka City, says she has managed to purchase the school requirements amounting to Shs600,000 but has an uphill task of raising Shs2 million for tuition.

“I  own a retail shop and also do some farming, but both businesses are not doing well. My only option is to run to my banker, Centenary Bank to secure a quick loan,” she says. Mr Muzamiru Musembya , the director  Buwenge Blue Primary School in Jinja District, says he has allowed all learners, including those with fee balances, to report back.He says the school has not increased fees for this term despite a steep rise in prices of commodities. “We have put aside the issue of making profits this term for the sake of our parents, let them come, we are ready to listen to all their concerns so that our learners are not affected, ’’ Mr Musembya says.

At Ibuje Secondary School in Apac District, the administration has reinstated Shs100,000 fees increment which had been suspended after the  Covid-19 lockdown, something that may scare away some parents ,according to  Mr Bosco Elyak, the district education officer Mr David Tusubira, the head teacher of Kibanga Primary School, Kalangala District says  of 775 pupils , only 345 have so far  turned up.“We urge parents to stop ignoring the first week of the term ,it is their children who are losing, ” he says .At Sserwanga Lwanga Memorial SS, Kalangala, only 247  of 523  students have reported,  according to Ms Jennifer Nalunga , the head teacher.

“We did not increase school fees, but some parents contacted us  saying  they are still looking for money,” she says.The head teacher of MM College Wairaka,Ms Hilda Namutosi, says since some students had fees balance for last term , they first deducted the  debt. The school charges Shs709,800 as tuition for all learners from S1 to S6.The head teacher of St Noa Mawaggali, Mr Leonard Ssali, says students with fees balance above Shs300,000 would be denied entry .Mr Isaiah Muki, the head teacher of Francis Ayume Memorial Secondary School  in Koboko District, said they have slightly increased fees to cater for the rising cost of commodities. Learners in boarding section are now paying  Shs347,000 up  from Shs297,000 while those in the day section who were paying Shs242,000, currently pay Shs292,000 . “We encourage parents to send students to school with whatever little they have or even bring maize grain,” he says.

Mr Patrick Edyelu, the head teacher of St Thomas SS, Kaberamaido, says they are ready to give a grace period within which every student has to clear fees.The school fees structure is Shs322,000.As the country awaits the instrument, economically constrained parents continue to face the prospect of a hike in fees, most of which are not approved by the Education and Sports ministry as required by law.

Mr Jimmy Turyagyenda, the head teacher of Ntare School, Mbarara, says they are lucky that all their learners  reported back in the first three days. “We have not had cases of students not reporting back, even the  students who did not complete last term’s fees are few,” he says. At Mbarara High School, the head teacher, Mr Ham Ahimbisibwe, says for students who have reported with some challenges ,management is  engaging  their parents to see how “ we can work together to see that students don’t miss out.” Mr Godfrey Kasasa, the director St Theresa SS, Katende Mpigi District,  says they have allowed  parents to bring their children without clearing tuition provided they have school requirements.

“If parents talk to us, we are also parents and understand the current situation in the country. We can allow the learners to study as their parents look for fees ,” he says. Mr Raymond Kayongo, a parent and businessman in Mpigi Town, says some schools have made it compulsory for parents to pay at least 50 percent of fees which is not readily available .“What I have decided to do is to keep the children at home until I get the  fees needed at school,” he says. Ms Mary Kalyongo, the head teacher of Makai SS, Nateete,  says of 1,275 learners  only 800 had  turned up by Wednesday afternoon.“We called upon parents to reach out to the school with children because this   is a promotional term and we have only one month to teach,” she says.

Mr Paul Mubiri, an administrator at Luzira Infant School, says many schools usually record low learner turnout at the beginning of the term because most parents think that serious lessons always begin in the second week.“They [parents] say the first week is always for  preparing and cleaning  the school,” Mr Mubiri says. The head teacher at Bubare Secondary School in Rubanda District, Mr Amos Ahimbisibwe, says  about 80 percent of the students have  reported but less than five percent have cleared  fees.“For us we are targeting at attracting back the students into the school then the fees issue shall be handled later. We shall continue to enjoy the good will that we have with the suppliers to ensure that the school runs normally,” Mr Ahimbisibwe says.