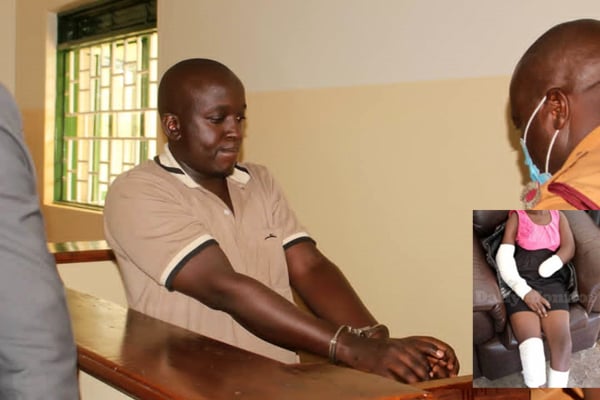 The Chief Magistrate’s Court in Bubulo, Manafwa District in eastern Uganda has sentenced a 27-year-old man to 15 years in prison after he was found guilty of attempting to kill a 14-year-old student whose hand he cut off after a botched rape attempt.Derrick Kuloba was also ordered to give Shs50 million to his victim to cater for her medical bills following the 2020 attack.

Prosecution had during hearing of the case told court that Kuloba, a resident of Nabooti Village, Nakatsi Sub-County in Bududa District, on July 4, 2020 armed with a machete, waylaid the victim and attacked her before chopping off her right hand in a scuffle after she rejected his sexual advances.

The girl who was then in senior two also sustained several injuries on other parts of the body.Prosecution presented three witnesses; the victim, her cousin and uncle who pinned Kuloba.The trial magistrate, Ms Ester Nalungi while delivering her judgment on Tuesday said the sentence was meant to punish Kuloba and discourage other would-be offenders from committing such offences.“I sentence you to 15 years. The punishment is to help the convict reform so that by the time he is free he can be a good person in the community,”Ms Nalungi said.

Ms Nalungi said the four months that the convict spent on remand would be deducted from the 15 years she had given him. “Kuloba will spend 14 years and eight months in prison after deducting four months he spent on remand. But in case you’re not satisfied with the court decision, you can appeal against it in a higher court,” she said.But according to her, prosecution had sufficiently proved that Kuloba attempted to murder his rape victim and that she (victim) can no longer feed or bathe on her own.

The state prosecutor, Mr Godfrey Wakasadha,had told court cases of Gender Based Violence (GBV) are rampant in the country and thus court needed to protect women from the likes of Kuloba who seem not to value human life.“He (convict) intended to cause the permanent injuries. The sentence and compensation will likely deter other people from attacking women and girls,” he said.After the court judgment, Kuloba’s lawyer, Mr Geofrey Nappa said they will appeal against the sentence on grounds that it was “unnecessarily harsh.”“The sentence is harsh, especially with the compensation of Shs50 million. We shall take the next step to get justice,”Mr Nappa said.

Ms Mariam Mwiza, a human rights activist who helped the victim pursue justice said she still suffers trauma as a result of the painful experience Kuloba took her through.“We are happy with the conviction and sentence. It has not been easy to get justice in this case. We promise to keep pushing for justice for other women and girls,”Ms Mwiza said.The victim’s mother, Ms Juliet Khainza had earlier told court that her daughter still needs surgeries but the family doesn’t have money.“We have sold everything to treat her but in vain. She was referred to India for surgeries but we don’t have money,”Ms Khainza said.