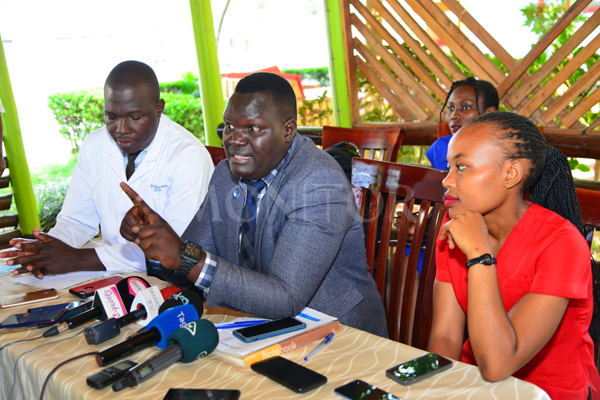 The Uganda Medical Association (UMA) has said government’s failure to compensate families of health workers who died in the line of duty during the Covid-19 response has affected the willingness of the carders to join the Ebola response team.  Dr Samuel Oledo, the UMA president, told Monitor yesterday that patients will continue to suffer because of failure of government to protect health workers.“As we talk, one of the health workers in Mubende Hospital (an intern doctor) who received the case that passed on in the hospital, is also having symptoms of Ebola Virus Disease (EVD) and has been isolated,” he said.

Dr Oledo said health workers lack appropriate Personal Protective Equipment (PPE) to handle Ebola cases since the outbreak was unexpected. The recommended PPE include a face shield, goggles, apron, gown and gumboots.The death risk for a person who is infected with Ebola ranges from 25 percent to 90 percent, according to the World Health Organisation (WHO). This is too high when compared to the Covid-19 fatality rate which is at around 3 percent. The lack of approved treatment and vaccine for Sudan Ebola partly explains the high death risks.  According to sources within the hospital, some frontline workers at Mubende hospital went on strike demanding assurance that their allowance would be paid.  The health workers were allegedly claiming that during the Covid-19 pandemic, they were not given their allowances yet they risked their lives. “Other health workers in the hospital are also forging sicknesses so that they can go on leave,” another source said. Dr Paul Batibwe, the hospital director, said he has not heard about the isolation of a health worker at the facility because of Ebola. But 16 people have been isolated at the facility. The Resident District Commissioner for Mubende, Ms Rosemary Byabashaija, who is heading the Ebola response, said the complaints would be addressed. “We got the complaints today and we will convene a meeting to discuss such challenges. We need to get first-hand information from the responsible persons. I wouldn’t want to go by rumours. We have to sit down with the officials from the Ministry [of Health] so that we can address that,” Ms Byabashaija said.

She said contact tracing is going on. “By noon today, we haven’t got any new patients. But have about 16 cases admitted at the [Mubende Hospital]. Twelve are responding to medication while four are seriously sick. We have several committees out there and we always meet in the evening,” she said.A total of seven cases, and eight suspected and one confirmed death have been reported by the Health Ministry since the outbreak was confirmed on Tuesday.

Health ministry saysMs Anifa Kawooya, the State Minister for Health-in-charge of General Duties, in an interview said they have sent their team to the district to meet the health workers.Dr Henry Kyobe, the Ebola Incident Commander, yesterday said he was in Mubende and there is a good corporation and contact tracing and case management are going on.  “Our success will depend largely on the corporation of the population, but also, on how much the health workers work. The more important element is the leadership from the government to the lowest level,” he said.Dr Oledo tasked the government to fulfill its promises to health workers.