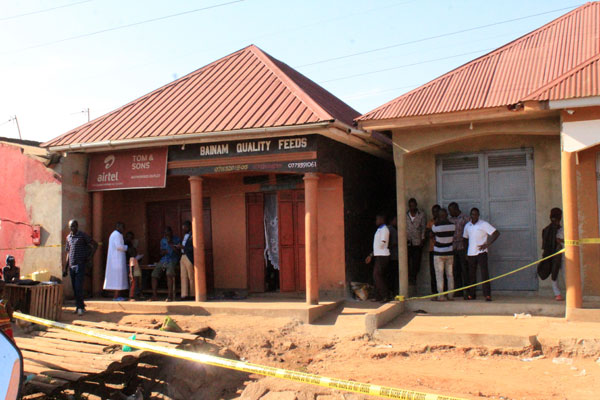 Police in Katonga region are holding a restaurant proprietor in Mpigi Town Council following the mysterious death of her two workers two days after they were hired.

The deceased, only identified as Lailah,18, and another Gift ,17-  both females , were sleeping inside a kitchen where they were  found dead on Sunday morning.

According to Mr George Ssenabulya, the chairperson Kavule Village, the two were hired on Friday from Iganga District to work at the restaurant.

“They[workers] have been sleeping in the room inside the restaurant and at  around 4am, the owner of the restaurant commonly known as Mama Sasha instructed them to light a charcoal stove and cook beans in preparation for Sunday,” he said adding ” After lighting the stove both fell asleep and are suspected to have died of suffocation.”

According to Haji Abdul Rahman, who was among the first people to arrive at the scene, Mama Sasha told him that she knocked on the door of the room where the girls were sleeping but no one was responding.

“We later called a carpenter from a nearby workshop who helped us to break the door. We entered and found both girls lying on the mattress dead,” he said.

He said Lailah had just accompanied her elder sister Gift who got a job at the restaurant and was set to return to her home village in Iganga District possibly on Monday.

Katonga Regional Police spokesperson, Mr Joseph Tulya said Mama Sasha being the proprietor of the restaurant will provide police with information to establish what exactly led to the death of the two girls.

“It is unfortunate that we have lost the two girls but their boss has some questions to answer given the circumstances under which they died,” he said