MPs Ssegirinya, Ssewanyana: A year in jail without trial

MPs Ssegirinya, Ssewanyana: A year in jail without trial 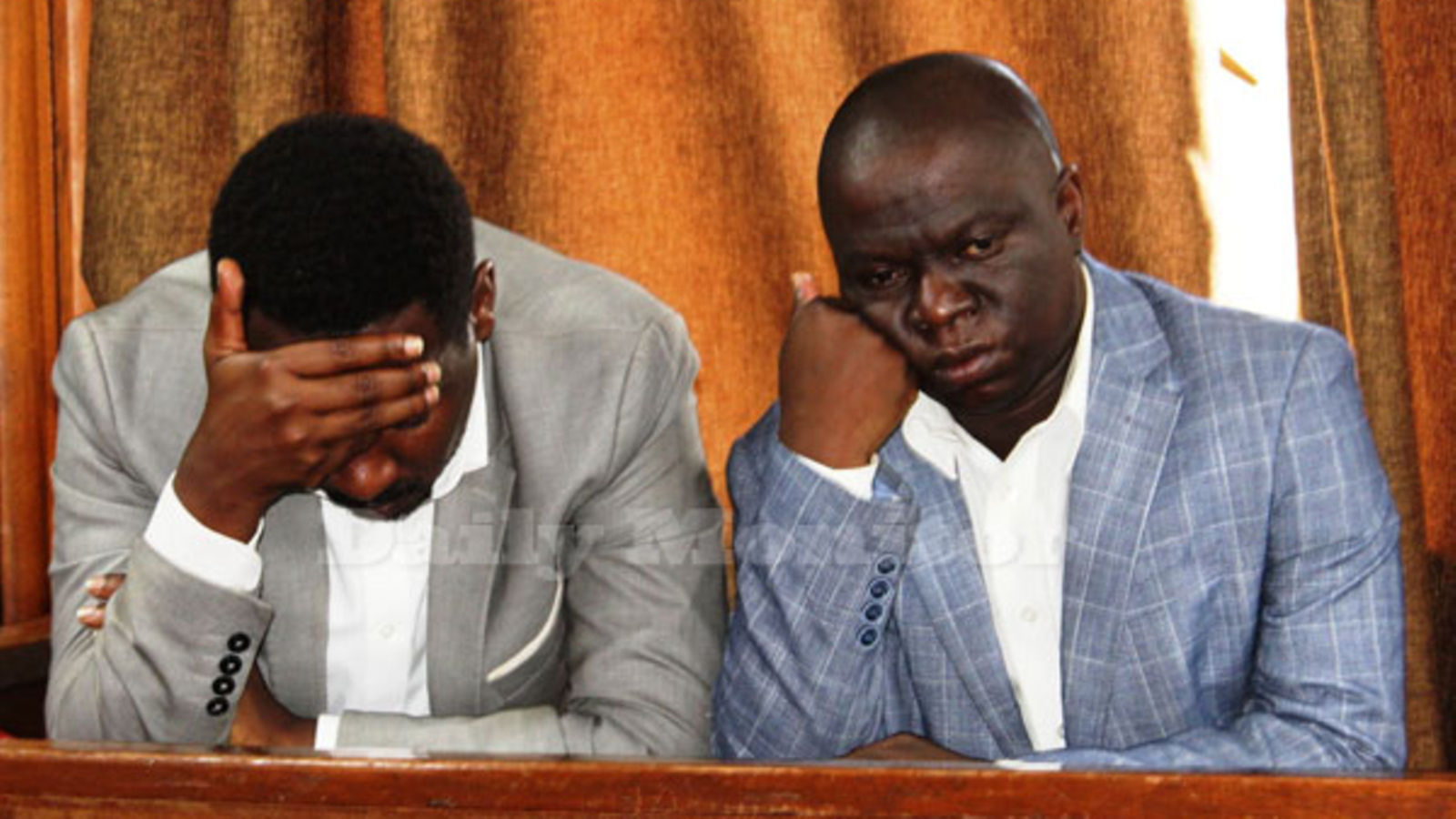 September 7, 2022, made a year since the Kawempe North Member of Parliament, Muhammad Ssegirinya and his Makindye West counterpart Allan Ssewanyana were remanded to prison in connection with the machete Killings in the greater Masaka region. The legislator’s trial has never kicked off and their numerous attempts to get out on bail have hit a dead end.

The duo’s lawyer and Kampala Woman Member of Parliament, Shamim Malende, says that the state has until now failed to produce evidence against her clients. According to Malende, they are unable to predict whether the duo’s trial will commence anytime soon. She says the incarceration of the legislators for a full year without trial has denied their voters representation in the August House.

“They have been on remand for a full year now and hearing of their case is yet to commence. No evidence has been adduced against the MPs. We have filed several bail applications on their behalf but all in vain. They have not been able to represent their constituents for a full year now because they are in incarceration. They have also not been granted access to their private medical personnel. This means that Uganda as a country still has a long way to go when it comes to respecting the constitution,” the Kampala Woman MP said.

Trouble for the legislators started on September 3, 2021 when the Commissioner of Police, Paul Kato Tumuhimbise on behalf of the then Criminal Investigations Director, Grace Akullo wrote to the Speaker of Parliament summoning them to appear before detective Moses Taremwa at Masaka Police Station on September 6 and record statements in connection with the July and August 2021 Greater Masaka spate of machete killings.

At least 26 people were killed and several others injured by the assailants in Lwengo and Masaka districts. The majority of the victims were elderly people living alone in their homes. The police summons came days after Police spokesperson, Fred Enanga was quoted saying that some suspects arrested in connection to the machete attacks had implicated the two legislators for holding planning meetings for the murders in Ndeeba, a Kampala suburb.

Mr Enanga was quoted saying that the suspects had revealed how the legislators had promised them wealth for executing the machete attacks, which necessitated the police to summon the two to record statements. Both Ssegirinya and Ssewanyana showed up at Masaka central police in the company of their lawyers, including Kampala City Lord Mayor Erias Lukwago and Shamim Malende where they recorded statements before they were released on police bond and asked to return the following day, September 7, 2021.

When the legislators showed up as directed the following day, they were arraigned before then Chief Magistrate Charles Yeteise (now retired) together with five others and charged with three counts of murder and attempted murder allegedly committed on August 23 2021 at Ssetaala and Ssenya villages in Kimanya-Kabonera division in Masaka City.  Their co-accused are Jackson Kanyike, John Mugerwa, Bull Wamala, Mike Sserwadda, and Jude Muwonge.

The prosecution told the court that the accused persons murdered Francis Kizza, Sulaiman Kakooza, and Tadeo Kiyimba and attempted to murder Ronald Ssebyato of Ssetaala village in Masaka city. Yeteise didn’t allow the MPs to take plea, arguing that his court lacks jurisdiction on the matter, and remanded them to Kitalya prison.

He ordered the prison authorities to return the suspects before the court on September 15, 2021 to check on the progress of investigations into the offenses. When the suspects returned on September 15, 2021, the Director of Public Prosecution amended the charge sheet and slapped them with additional offences of terrorism, aiding and abetting terrorism. Despite this, the MPs through their lawyers applied for bail in the High Court, arguing that they are suffering grave illnesses including hypertension and complications of the kidney and liver, which cannot effectively be managed inside prisons.

The suspects told the court that they were law-abiding citizens with permanent and fixed places of residence without any prior criminal record. Consequently, Lady Justice Victoria Nakintu Katamba granted them cash bail of Shs20 million each. She also directed them to deposit their passports with the court. However, the legislators were re-arrested in the precincts of Kigo prison on separate occasions. They challenged their rearrest and sought the enforcement of their human rights and compensation for the gross violations meted on them but lost the case to the State.

Subsequently, on September 29, 2021, the state slapped the MPs with another murder charge of one Joseph Bwanika, a resident of Kiseka B Village, Kankamba Parish, Kiseka Sub County in Lwengo, and arraigned them before Masaka Grade One Magistrate, Grace Wakooli. The MPs made a second attempt to secure bail on the fresh charge.

However, Masaka High Court Judge Lawrence Tweyanze declined to release them on October 25, 2021, arguing that it could jeopardize the ongoing investigations given their influence in the community.  Tweyanze however, issued express instructions to the prison authorities to ensure that the MPs get the required medical services for their respective health conditions.

From that time to March 28, 2022, the MPs remained on remand as they only reported to the court monthly to get updates on the status of investigations into their case. They were then arraigned before the Masaka Grade One Magistrate, Christine Nantege who informed them that investigations were complete and committed to the International Crimes Division of the High Court for trial.

At around that time, social media started reporting Ssegirinya’s death moments after he had been hospitalized at Mulago National Referral Hospital. Ssegirinya’s mother would faint and shed uncontrollable tears appealing to the President to pardon his son, whom she claimed was innocent. The MPs later petitioned Court of Appeal seeking to be granted bail. On June 29, 2022, the appellate court judges, including Cheborion Barishaki, Christopher Izama Madrama, and Eva Luswata denied them bail, saying they lack the jurisdiction to entertain their application.

The same judges said they had taken note of the fact that Ssegirinya and Ssewanyana have taken long on remand without being tried. They directed the preparation of all files involving the legislators such that they are taken to the Principal Judge to expedite their trial and enforcement of their human rights.

Last week, Samuel Muyizzi Mulindwa, one of the legislator’s lawyers told this reporter that a copy of this order was extracted and served to the Principal Judge. According to Muyizzi, they expected the judiciary to deploy another judge to hear the matter expeditiously once the presiding judge is transferred as directed in vain. He believes that everything happening, in this case, is already predetermined.

It came after the court informed the lawyers that the pretrial judge of the International Crimes Division, Ms Jane Elizabeth Alidviza had been transferred and they will be informed of the next judge who will preside over the matter. The MPs, together with their co-accused were accordingly remanded further until September 20, 2022 when they return to establish whether they have been allocated another judge.

“If the consolidation is not done, the Honorable Court is bound to give two conflicting decisions in respect of a common theme, set of circumstances, and common questions of the law and fact which will prejudice the applicants,” reads the fresh application.

According to the lawyers, the move is intended to avoid a multiplicity of proceedings of similar matters in the interest of justice. There are other several applications in this case, including an application by the State seeking to protect witnesses during the trial, an application by lawyer Male Mabirizi seeking to halt the proceedings pending determination of his constitutional petition challenging the legality of presenting separate files whose details are almost similar against suspects and a new bail application filed by the MPs last month. All these await a hearing before a new judge.

The Leader of Opposition, Mr Mathias Mpuuga while on the floor of Parliament yesterday said the two MPs will require special intervention from the House, arguing that there seems to be a syndicate to have them in detention against the Constitution which is clear about the rights of those in detention.“These two members will require a special intervention of Parliament. It’s a syndicate, in our view, to have them in detention against the provisions of the constitution. Probably our Constitutional order has broken down and people are taking matters into their hands. Probably this House of Parliament will be the last firewall for citizens who have been trampled upon by the State…I don’t want to say that the Judiciary has joined in connivance but we are asking of the Judiciary to do its work to uphold the rights of citizens without undue interference by the State,” he said.

It’s against this background that the Speaker called for an expeditious trial of the two legislators.

“As the head of the institution, all Members of Parliament here belong to the Speaker. My two members of Parliament make one year in Prison today [Wednesday]. I request government to hasten trial of these members so that they go back and represent their constituencies. Let’s see how we can have their case concluded,” Ms Among said.

The Shadow Cabinet is scheduled to visit the two MPs at Kigo Prison on Thursday.