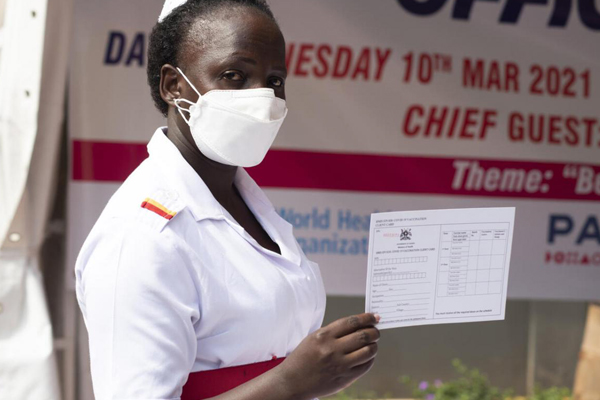 Residents in Mukono are demanding vaccination cards from the government noting that they completed the Covid-19 dozes but were not given cards.

The cards are being used to access various areas in the country including some health facilities, government offices and other places, therefore without them, one may miss out on a great opportunity.

Mr Paul Mukasa, a resident of Kiwanga village said he was vaccinated last year in October but has never received his vaccination card.

“I am a driver and recently got a job in an oil company but I have been left out because I have no vaccination card which was one of the requirements,” he said.

Mr Musa Kabanda, a truck driver said he recently got a better job in Namanve but was prohibited because of lack of a vaccination card.

“Some of us complained and a lady from the Ministry of Health came, registered us promising to deliver them but she has never returned and yet we want to work,” he said.

Mr Herbert Kamba, a businessman said he has failed to sell his products because of lacking a vaccination card.

“I recently wanted to market my products to some government organizations but I was asked for a vaccination card at the entrance and had to just return home,” he said.

He said he also wanted to attend a conference at Kololo grounds presided over by the first lady but failed because of a card.

Recently in Kibuku District, patients without vaccination cards were being denied access to health care which they said was a violation of their human rights.

Though it’s a government initiative to get everyone vaccinated, some people said they should be free to access medical care with or without vaccination cards because they got the vaccines.

The communications officer for Initiative for Social and Economic Rights (ISER) Mr Joshua Kisawuzi said people have a right to have their vaccination cards and government should be in a position to provide them so that they enjoy their rights fully.

Ministry of Health spokesperson, Mr Emmanuel Ainebyoona, said they are soon convening a meeting to discuss the matter.