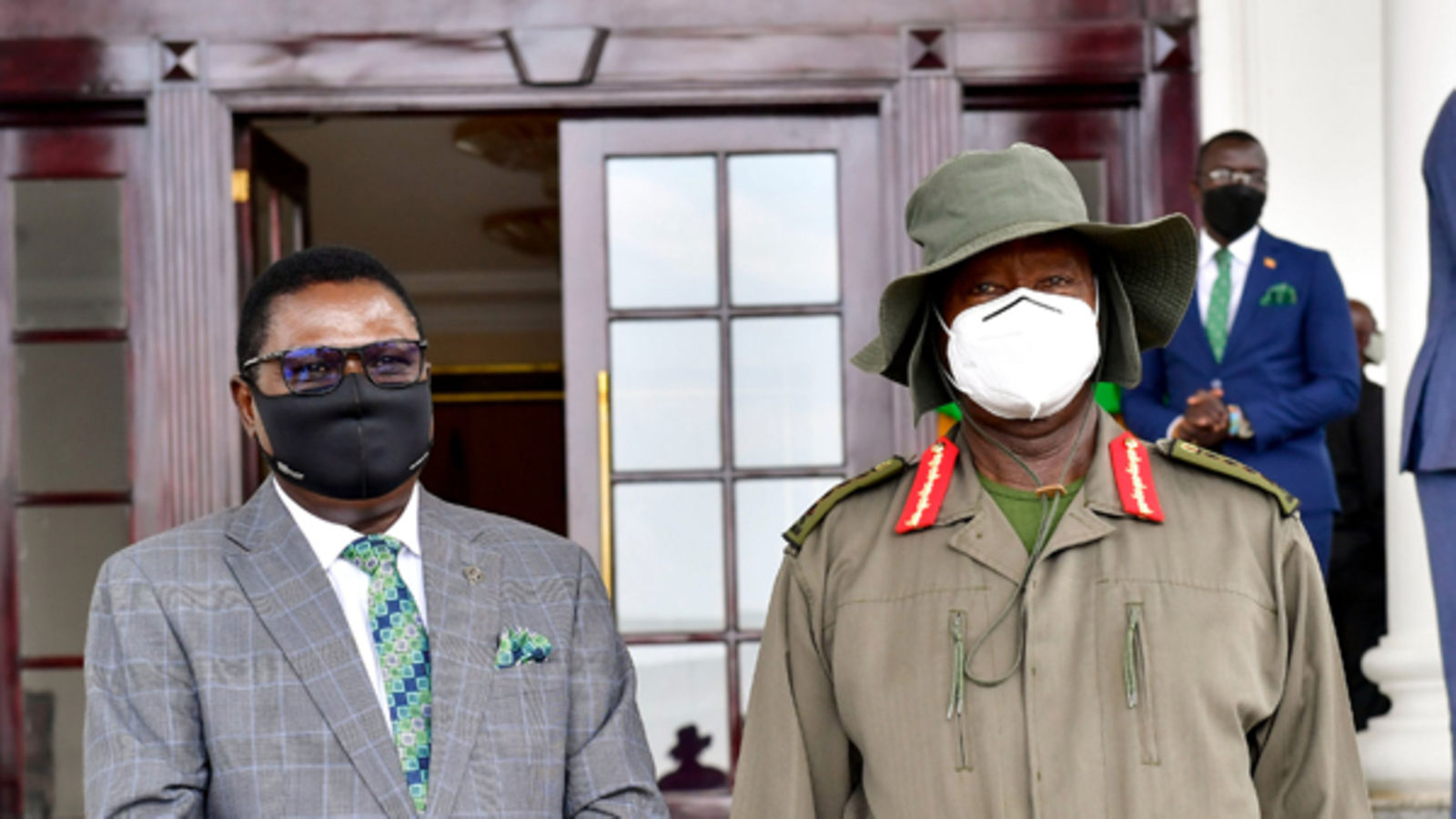 Democratic Party (DP) president general Norbert Mao has been a man under attack since July 20 when his party signed a cooperation agreement with the ruling National Resistance Movement (NRM) party.

“There is no question that we don’t have a president anymore; the head has been cut off. We are now going to prepare and do surgery to put a new head to the party and the party will continue to run,” the Mityana South MP declared.

In Nasser Ntege Sebaggala’s steps, Mr Mao is traveling a road that was ironically first walked by the former Kampala mayor who Mao beat to the DP hot seat in February 2010.

Seya – as Sebaggala was popularly known – had in light the realisation that Mr Museveni preferred to deal with individuals in Opposition, and started looking further than his fellow DPs.

On November 11, 2006, a few months after he had regained his seat as mayor of Kampala, Sebaggala and Mr Museveni were together at the launch of a safe water project in Rubaga Division.Speaking on December 20, 2008, during the wedding of Seya’s son, Sulaimain Cobra, Mr Museveni praised Seya as an “astute politician who never allows divergent views to translate into enmity”.Sebaggala’s campaign message also changed to “we shall change where necessary”. He, in the run up to the Mbale delegates’ conference, started telling DP supporters that it was necessary to start dialogue with NRM on the possibility of sharing power.

Many of the delegates voted against him because they were uncomfortable with the cosiness between him and Mr Museveni. It would appear that DP is back to where it was in February 2010.

Strange attacksMost of Mr Mao’s critics, especially those on social media, have sought to portray him as a traitor and a turncoat who has abandoned the rough and tumble of Opposition politics for the comforts on offer from the ruling party.

What is, however, strange is that some of Mr Mao’s most virulent critics are some of the very people who have been hailing the way politics is played out in Kenya where there were coalitions in the Opposition.

The first was the Rainbow Coalition government that led to the rise of Mwai Kibaki, who became the nation’s third president.

The Jubilee Coalition was later formed with Mr Uhuru Kenyatta and William Ruto at the top.A March 2018 handshake between President Kenyatta and former Prime Minister Raila Odinga helped ease tensions that arose out of the acrimonious 2017 election which Mr Odinga lost to Mr Kenyatta.

That handshake paved way for the Building Bridges Initiative (BBI) and has since culminated in a decision by Mr Kenyatta to back Mr Raila in next month’s general election even when his deputy and former ally, Mr Ruto, is a candidate in the same race.

Comparing oranges to applesProf Sabiti Makara, who teaches Political Science at Makerere University, says one cannot compare the cooperation pact between Mr Museveni and Mr Mao and their parties to the coalitions that play out in Kenya.

“For the Kenyans, it is a principled kind of coalition formation. They form coalitions of three or four groups with the idea of taking power, but in any case, most of those coalitions occur within the Opposition. But here I think this is really jumping on the bandwagon,” Prof Makara argues.

Legitimacy issuesMr Fred Oweyegha Afuna-adula, a retired Makerere University don, says it is highly unlikely that Mr Mao’s critics would have criticised him if the deal with NRM had been arrived at in a transparent manner and in consultation with the party.

“It was between him and Museveni. He did not consult his party. Party organs must be used to inform a pact of that nature. Kenyans involve parties, not just individuals. Kenyans use coalitions, while Museveni uses co-option” Mr Afuna-adula says.

While addressing a DP press conference on Tuesday, Mr Mao debunked the argument that he did not consult his party, saying one of the top organs, the management committee, had been in the know, but members of the national executive council (NEC) have since disassociated themselves from the deal.

A day after the agreement, the party’s legal advisor, Mr Luyimbazi Nalukola, suggested that the decision Mr Mao, secretary general Gerald Siranda, and national chairman Kiwanuka Mayambala, took to join Mr Museveni in putting pen to paper was not endorsed by the party.

“At no point in time has NEC debated or discussed this issue of alliance of cooperating with Museveni’s government and indeed me as the attorney general of the party and my brother Lumu have never been consulted. I challenge Mao to present evidence in that regard,” Mr Luyimbazi said.

One of the biggest talking points around the relations between NRM and the Opposition has always been the former’s refusal to facilitate a process that would have created a structured way of engaging and cooperating.

Mr Museveni has previously preferred to make deals with individual actors in the Opposition. This is the first time that we have seen him operate as the chairperson of a party engaging the principal of another party.

Mr Yona Kanyomozi, who represented Bushenyi South in the 4th Parliament and also served as the minister of Cooperatives and Marketing during the Obote II regime, does not think highly of the said pact, insisting that it is an agreement between two individuals whose interest is power. One seeks to get it, while the other seeks to retain it.

He is, however, quick to add that Mr Mao should be given credit for making a formal agreement with NRM, something that other politicians never achieved.

“It is a good starting point between individuals… I don’t know whether DP knew what its leaders signed before he signed and whether it was discussed with the second signatory before it was signed, which would be a limitation, but generally, it is an improvement from the 1986 gentleman’s agreement,” Mr Kanyomozi says.

In 1999, while writing in the paper An Insider’s View of how NRM Lost the Broad-base, Col Dr Kizza Besigye pointed out that in 1986, NRM named a committee headed by the late Eriya Kategaya to engage various political parties, but that the engagements came to nothing.

“It would appear that once the leaders of the political parties were given ‘good’ posts in the NRM government, their enthusiasm for the discussions waned, and the process eventually fizzled out,” Dr Besigye wrote in the paper that triggered his departure from NRM.

The hard bitFor other developments at both DP and NRM, the signing was the easier bit. The implementation of the provisions of the agreement is what they name as the much more difficult bit.

“I think there is some significance in having a written document, but the implementation is my worry,” says Prof Makara.

Prof Makara says Mr Mao would have no way of ensuring that Mr Museveni meets his end of the bargain.“I think the pact is superfluous because I don’t think it will bind Museveni in any meaningful way. As the President, he still has the prerogative to implement it or not. I don’t see how the pact can bind him to this or that. You cannot take him to court for this or that,” Prof Makara argues.

SuspicionsQuestions around whether Mr Museveni will fulfil his bit of the pact seem to be born out of mistrust in the person of the President. That most probably has a lot to do with how Mr Museveni and the NRM/A conducted themselves after the signing on December 17, 1985, peace pact with the Tito Okello regime.

Negotiations under the auspices of then Kenya’s president Daniel arap Moi commenced on August 26, 1985, but NRM/A had during the course of the negotiations taken over large swaths of territory in western Uganda from where they sprung an onslaught on Kampala and later the rest of the country.

However, Dr Frank Nabwiso, who was a member of the external wing of the party, explained in an earlier interview that the decision to disregard the Nairobi Accord was precipitated by the external wing, whose chairperson, Mr Mathew Rukikaire, issued a statement on December 28, 1985, urging the fighting forces to descend on Kampala.

“We feared that violation of basic human rights would continue because the military junta was unable to stop the various militias (UFM, FEDEMU, UNRF and FUNA) that were in Kampala from carrying out atrocities. We saw no organ that could reign in those armies,” Dr Nabwiso said.

The NRM/A, however, seems to have honoured subsequent agreements. In June 1998, for example, Mr Museveni’s government signed a peace agreement with the Uganda People’ Democratic Movement, which resulted into the absorption of rebel fighters into NRA. Many are still serving.

Remnants of the forces of the Former Uganda National Army (FUNA) and the Uganda National Rescue Front (UNRF) also remain active in the army and government. Will it honour its agreement with DP though? That is the question and the fear.