Ngobi found true meaning in life as a caregiver

Ngobi found true meaning in life as a caregiver 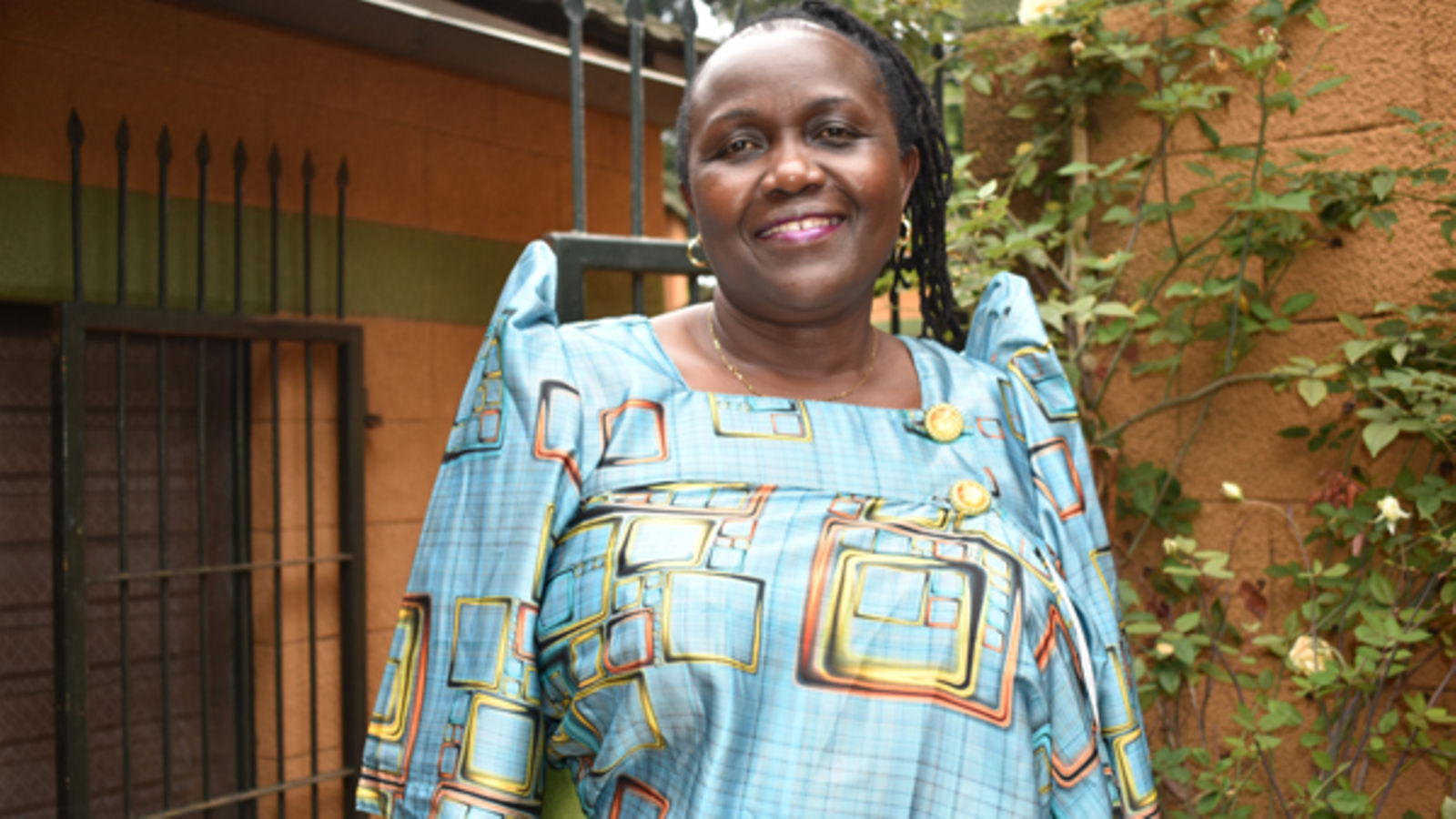 “No child should grow up in an unsuitable environment without the loving care of family,” Maria Ngobi says during a Monday morning walk around the SOS Children’s Village in Kakiri.

The Children’s Village in Kakiri, which mirrors the other locations that exist in Gulu, Entebbe and Fort Portal, comprises 13 family houses, a Village Director’s house, a guest house, a multi-purpose hall, a sports ground, a social centre and play space.

Also available are a primary school and an administrative and service block.

The maximum capacity of a family house is 10 children and a caregiver, while a Children’s Village accommodates 120 children, most of them abandoned at birth.

Each house also has a Mother who takes care of the children until they are ready to be reintegrated into the community.

Ngobi is one of 49 ‘mothers’ or caregivers spread across 49 family houses in the four locations.

Currently, she takes care of five children aged 13 to 16 as she waits for new arrivals.

In total though, she has raised 27 children across her career with SOS that started as a 28-year-old on October 1, 1996. Most of her children have left the Villages and have been reintegrated into the community.

She remembers her first children; Innocent Mukasa* , who was brought in aged two months in 1996 and Francis Barugahare* , who was one and a half years old, like she just joined SOS yesterday.

Mukasa now lives in South Africa while Barugahare is now based in the United States of America.

“Technically, I am a caregiver although most people know us as SOS Mothers,” Ngobi, a midwife by profession, says. As a Mother, she is also charged with following up on the whereabouts of her children who start the process of leaving the House for the community as adolescents.

“On top of my biological children, these are also my children because I have seen them grow, I have lived with them, I have been there for them as their mother,” Mama Maria as she is fondly known, says.

The same can be said of the 48 other Mothers and several caregiver Aunts who step in when the Mothers are on leave or need to run an errand.

Her interest in taking care of children started at a tender age while still a pupil at Nyenga Primary School, Jinja in the early 1980s.

Maria Ngobi has been a caregiver since 1996 when she joined SOS Childrens Villages. PHOTOs/CAESAR ABANGIRAH

“My mother was a midwife. So every time her friends gave birth, I would rush over to their homes to babysit,” she says, only to return home after about two weeks of babysitting.

She then followed her mother’s footsteps and became a midwife after graduating from Kamuli School of Nursing and Midwifery in 1990 following a three-year-course. She then joined Rubaga Hospital where she spent six years as a midwife.

“I was on night duty when I saw an advert in the papers calling for caregivers at SOS, which had started operations in Uganda in 1991 with Kakiri opening as the first location,” she says. The advert required one to either be a doctor, teacher or social worker.

So she tried her luck and sat four interviews, the last being a general health checkup; at one point, she says, she almost gave up, having waited for confirmation for over six months.

Then she received her appointment letter.

“I handed in my resignation but it was rejected. My boss then thought I was quitting to get married. She told me, ‘Those men will confuse you, why don’t you first make money here before leaving for a firm you know nothing of?’  my boss said. But I was determined to leave even after I had been voted best employee having never reached work late,” she adds.

Then, she was 28, and had a two-year-old son, and insisted she would try her luck. Her wish was granted but she was told there would always be an opening in case the new job did not go well.

Next month, she will mark 26 years as a caregiver.

“This job requires patience and tolerance. It is also highly emotional but one of you has to be strong enough for the others. Above all, it is fulfilling because we raise previously abandoned children in a proper family set up with strangers becoming brothers and sisters,” the 54-year-old says.

Children admitted into the SOS facilities have either lost their biological parental care or face the real threat of losing parental care. They are referred to the organisation by children’s courts, government departments, police stations, credible community organisations, hospitals and members of the public.

In all cases, a thorough and transparent admission process is followed to ensure that the most meriting cases are admitted and that the organisation is acting in compliance with its policies and statutory obligations.

“Some of these children have unanswered questions and we are therefore required to help them. We can only do this through listening to them and talking to them. If all fails we involve counsellors, administrators and phycologists otherwise they might become wrong characters in society,” Ngobi says.

Once admitted into an SOS Children’s Village, a child is offered a new beginning full of love, security and possibilities. All children are cared for by qualified and trained ‘mothers’ who provide the emotional, psychological and nutritional needs of all our children.

Attached to the Children’s Villages are youth facilities where young people move to when they reach adolescence.

The youth facilities also house older youths who are preparing to leave the organisation once they have completed their education and training, be it vocational, or academic.

But there are challenges.

According to Ngobi, as the children grow older, their curiosity grows.

“They start asking questions such as ‘where am I from,’ or ‘why was I abandoned’ and if you do not package the answer right you leave even bigger scars on their hearts,” she says.

But because they have now become family, the caregivers introduce them to their own people, and let them know that everything will be fine.

Also, Ngobi says, it is often hard to trace children’s clans, especially those brought in at a tender age without a name.

“So we end up giving them open-ended names such as ‘Kirabo’, ‘Kisakye’, those that do not belong to any clan. This of course might cause problems in future when they are ready to get married or when they are seeking national identity cards and passports.”

This, she begs, should be streamlined especially at NIRA so that they do not feel more maligned than they already are.

“We cannot keep putting ‘Unknown’ in place of ‘name of father,’” she says.

Every child is God’s gift and every child brings good luck and happiness. However, some parents, due to various reasons end up dumping their newly born babies. This, Ngobi is totally against.

“No one should abandon their children whatever the situation. Some of these children turn out great. Some of the children we have looked after are now doing well with PhDs and good jobs. And then you miss out on this opportunity because you abandoned them. Yes, we might love them but we could never do that as much as you the parent.”

And as she waits to retire next year, Ngobi urges the government to find job placements for some of their children.

“Government should support us with internships, or create employment for our children. Most of them are highly qualified because that is one of our duties; to train children into highly qualified individuals,” she says.

“They have the skills after joining our youth programmes. Now they need the jobs.”

RESPONSIBILITIES OF A CAREGIVER

The main responsibility of a caregiver is to form a family with several children who require family care. This is not an easy task because a parent is the caregiver for children with different backgrounds, many of whom have lived through very painful experiences.

A basic element in a family is that the parent has a personal relationship with each individual child and they appreciate and support each child in the family, taking into account each child’s individual strengths and weaknesses, as well as each child’s personal background. This work includes supporting children with their past experiences and maintaining contact with the children’s biological families, when appropriate.

Every parent needs skills in a number of different areas, including a hands-on approach, theoretical knowledge and parenting skills. This means that parents must have a constructive attitude towards challenges they may face in parenting, as well as challenges they may face themselves. They have to be prepared to become involved in painful processes if it is in the child’s interests, and they have to be able to recognise their own personal limits and needs so they do not become overwhelmed.

An understanding of parenting duties is also grounded in knowledge of academic fields such as education and psychology. Specific skills are required to apply this knowledge and put what has been learnt into practice.

A parent’s duties include working with children’s biological families and community members to ensure the rights of all children are respected. The parents training, which focuses on imparting these skills, represents another step forward for the profession of parent, and is a significant move towards recognising parents as educational specialists in out-of-home care.

The names of those Ngobi cared for have been changed to protect their privacy.